Reaching a peak – traffic has fallen back to late-1990s levels, but new services started in the last two years include Air Canada to Calgary; Alaska Airlines to Chicago, Long Beach and Maui, jetBlue to Long Beach, Southwest to (a competitive) Denver and United to Klamath Falls. A new Toronto service begins in June operated by Air Canada.

After reaching a peak of over 14.6m million passengers in 2007, Portland International Airport in Oregon (not to be confused with the one on the other side of the US in Maine) has seen traffic fall back to the levels of the late 90s as a result of the economic downturn in the US. Located only just over 200 kilometres south of Seattle, Portland is by far the busiest airport in the state of Oregon and ranked 30th in the US in 2009. 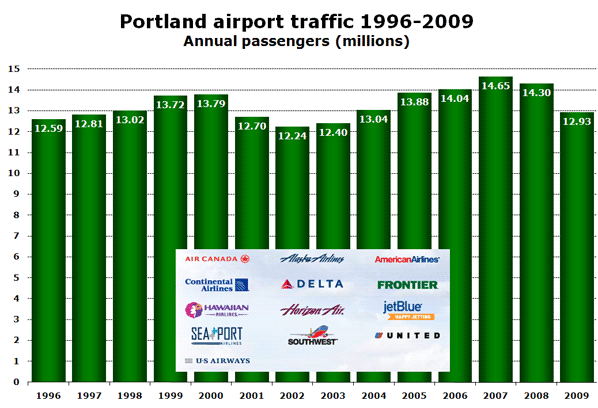 No single carrier is dominant at the airport though Alaska Airlines and its partner Horizon Air accounted for just over one-third of all passenger movements in 2008 and 2009. Southwest is the other key airline, handling just under 20% of passengers last year on 13 non-stop routes. 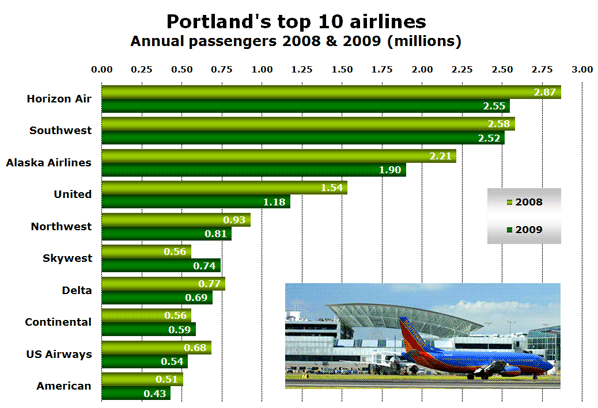 Most of Skywest’s services are operated on behalf of United, helping to make United the third biggest airline at the airport. Just outside the top 10 are Hawaiian, Frontier and jetBlue. These top 13 airlines account for almost 99% of scheduled passenger traffic in 2009.

Four destinations are served with at least 10 daily flights with Seattle by far the busiest route, despite its relative nearness. Denver is the most competitive route with four carriers jostling for customers since Southwest started the route in June 2008.

International services currently include Air Canada to Calgary and Vancouver, Alaska Airlines to Vancouver, and Delta operating to Amsterdam (since 2008) and Tokyo Narita (since 2004). Lufthansa’s service to Frankfurt was pulled last September (having operated since 2003), but a new Toronto service begins in June operated by Air Canada. Mexico used to be served by Mexicana to Mexico City and Guadalajara but both of these links ended in the second half of 2008. 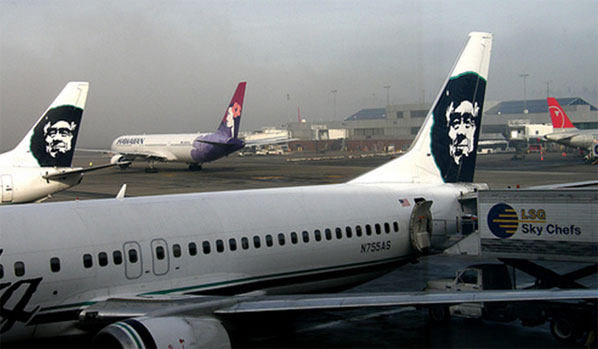 Two cool Alaskans and a hot Hawaiian: No single carrier is dominant although Alaska and partner Horizon carry just over one-third of all passengers.

In the last two years as airlines have been forced to examine carefully the viability of all services, several services to and from Portland have been lost. Apart from the international routes already mentioned domestic services lost include Cincinnati (Delta), Las Vegas (US Airways), Los Angeles (Delta), as well as regional services from Alaska/Horizon to Billings, North Bend, Pasco, Redding, Reno and Santa Barbara. Some of these destinations are still served by other carriers.

New services to have started in the last two years include Air Canada to Calgary; Alaska Airlines to Chicago O’Hare (taking on United), Long Beach and Maui; jetBlue to Long Beach; Southwest to Denver; and United to Klamath Falls. 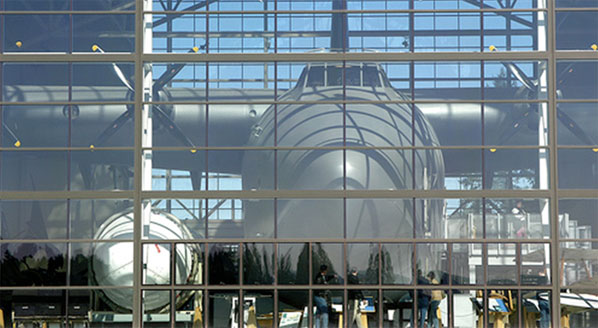 OK we know you want to see a picture of it: Howard Hughes’ Spruce Goose – just 50km from PDX.

‘Spruce Goose’ is just an hour away

For aviation enthusiasts the local area includes the Evergreen Aviation & Space Museum in McMinnville, just 50 kilometres southwest of Portland. This is the current home of the legendary ‘Spruce Goose’ commissioned by Howard Hughes. It used to reside in Long Beach alongside the Queen Mary but is now the star attraction of this museum, having undergone major restoration.