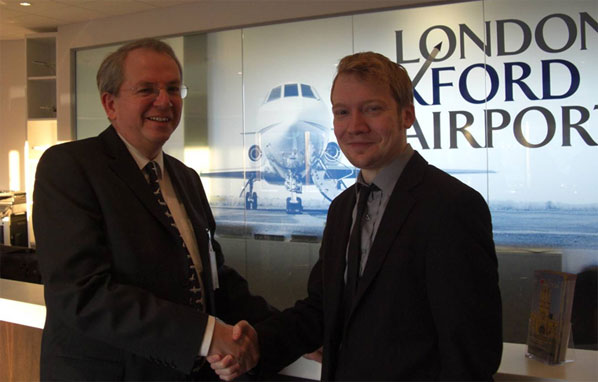 At yesterday’s launch: anna.aero’s Ralph Anker (age not known) and Varsity boss Martin Halstead (23). Speaking exclusively to anna.aero Mr Halstead confirmed that additional aircraft had already been identified and that more routes would be announced soon. 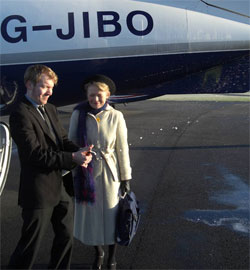 Mrs Halstead: Now what mum wouldn’t be proud to have an airline entrepreneur for a son?

Yesterday saw the launch of the UK’s newest airline, Varsity Express, with a flight from London Oxford airport to Edinburgh using an 18-seat BAe Jetstream 31. anna.aero was on hand to wish the airline’s managing director (and anna.aero reader) Martin Halstead all the best with his latest airline venture.

Mr Halstead received considerable media coverage when he started his first airline Alpha One Airways in 2005 when he was just 19. Now approaching his mid-20s the far more travelled airline executive is starting daily services (weekdays) to Edinburgh rising to twice daily flights on April 5 when daily flights to Newcastle also begin. Speaking exclusively to anna.aero Mr Halstead confirmed that additional aircraft had already been identified and that more routes would be announced soon. 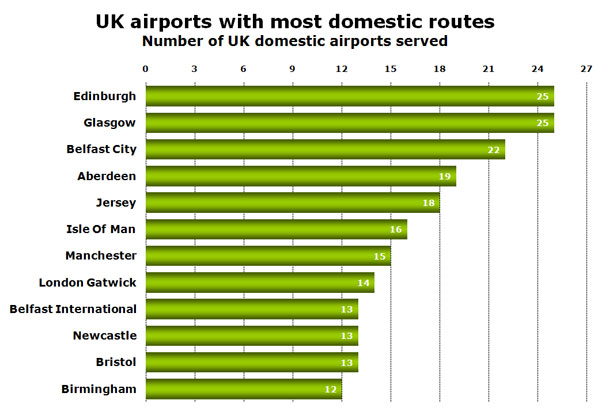 The top 12 best connected UK airports for domestic destinations features just one London airport, Gatwick. London Heathrow does not even get close to making the list as it now connects to just seven other UK airports: Aberdeen, both Belfast airports, Edinburgh, Glasgow, Manchester and Newcastle. When Oxford-Newcastle services begin next month Newcastle will be up to 14 domestic destinations, level with London Gatwick.

It works then: Edinburgh services rise to twice daily on April 5 when flights to Newcastle also begin. 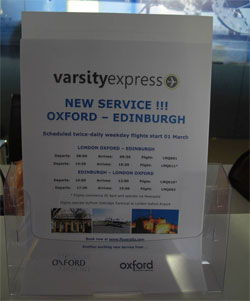 This information can also be found in an array of products provided by anna.aero’s data source partner OAG.

LinksAir provide the aircraft; possible next Prime Minister may be customer

Varsity Express uses the Air Operator’s Certificate (AOC) of Humberside-based LinksAir. Lead in fares are from £49 ($75) one way including all taxes and charges with fully-flexible fares starting at £139 ($210). London Oxford Airport’s unique catchment area includes Oxford and several other towns with higher than average disposable income, including Witney, the constituency of Conservative Party leader David Cameron who is currently marginally favourite to win this year’s election – after which he plans to cancel plans for Heathrow’s third runway. The London airports (other than London Oxford) are all between one and two hour’s drive from the airport as are Birmingham, Bristol, and Southampton. The only other major source of flights in the region is RAF Brize Norton where ancient military Tristars and VC-10s can be seen operating the air bridge to Afghanistan.