American Airlines was the big star in “Up In The Air” along with George Clooney in “The story of a man ready to make a connection.” It was nominated for six Oscars on Sunday but, er, didn’t get any. The big winner was American which got a lot of handy PR but didn’t pay anything for its product placement – apparently it’s much cheaper to make a film with a real airline than a pretend one.

Chicago O’Hare is a major base for two US carriers, American Airlines and United. American currently operates almost 2,900 weekly departures to 108 destinations making it the airline’s second biggest base after Dallas/Fort Worth (though it offers slightly more seats from its Miami base).

United by comparison has over 4,000 weekly departures from the airport to 150 destinations. Between them they account for 80% of capacity at O’Hare. Last year passenger numbers at the airport fell by 9.1% to 64.4 million with both domestic and international traffic falling at the same rate.

In the last two years American has scaled back its presence at the airport cutting around 13% of flights between March 2008 and March 2010 and axing several routes. However, between April and June this year American is resuming several previously dropped services and adding several completely new routes. The new routes include two new destinations in Canada (Calgary and Vancouver) plus a daily service to Beijing. This will result in an increase in flights of 13% between March and June, but only a 4% increase in the total seat capacity offered by the airline.

None of the American routes are new destinations for the airport as all are currently served by United (even the Beijing route), with the exception of Anchorage which is served by Alaska Airlines. 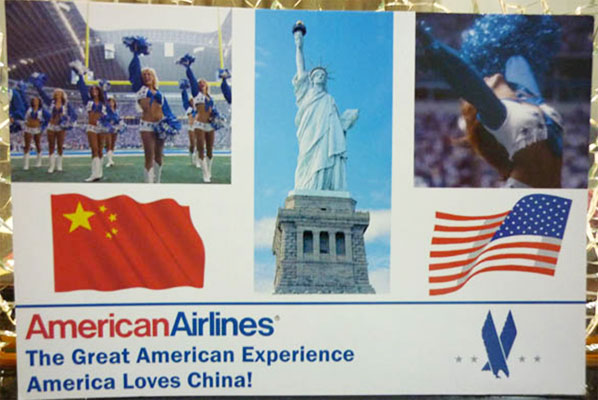 This puzzlingly-simple but cheerful objet d'art by Christiane Isenberg is called “America Loves China.” We have no idea whether the work was in any way commissioned by American Airlines, but we hope it helps in getting the Chicago-Beijing daily service established when it starts in April after a delay of one year.

The resumed routes include four short-haul domestic routes, Honolulu and a seasonal service to Rome Fiumicino. All of the routes are already served by United while Alitalia is also operating Rome services.

By summer American’s network will have increased to serving 119 destinations including 20 outside of the USA. These include five destinations in Canada and two each in China, Mexico and the United Kingdom. Other long-haul destinations served include Delhi and Tokyo Narita in Asia and Brussels, Dublin, Frankfurt, Paris and Rome in Europe.