Analysis of the busiest airport-pairs (as opposed to city-pairs which involves a judgement as to which airports serve the same city or metropolitan area) in Europe, Asia and North America reveals different levels of competition in each region. Europe, where many cities are served by multiple airports and where the market is truly liberalised sees a lot of indirect competition where low-cost carriers typically take on legacy carriers by using secondary airports. How does this compare with Asia and North America, and just how busy are the leading routes in these regions?

Within Europe the busiest airport-pair is still between Madrid and Barcelona. This is despite the fact that traffic on the route has fallen from just under five million passengers in 2007 to just three million in 2009. It remains a fiercely contested route with four carriers offering multiple daily flights. 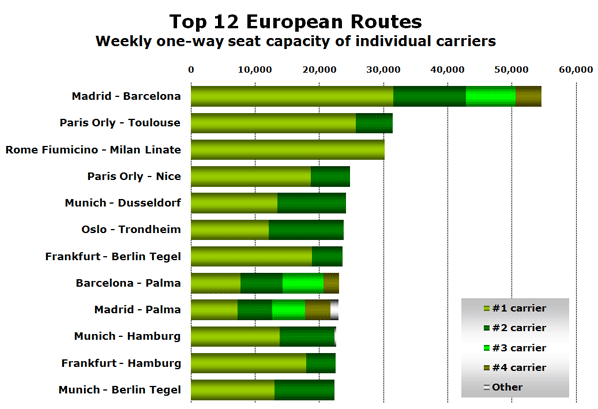 Europe’s top 12 busiest routes are all domestic routes; five in Germany, three in Spain, two in France and one each in Italy and Norway. The two French routes ranked second and fourth both have Air France as the dominant carrier and easyJet providing relatively modest competition. The Rome Fiumicino to Milan Linate route is by far the biggest monopoly route within Europe, something Alitalia should be trying to exploit as much as it can. Nine of the top 12 routes are basically monopoly or duopoly routes. All five German routes are duopolies featuring Lufthansa and airberlin. Only the three Spanish routes feature more than two carriers competing head-to-head.

Only one of Europe’s top 12 routes would even make the top 12 in Asia where traffic tends to be concentrated at fewer, larger airports as fewer cities have secondary airports and where they do exist there tends to be a system for allocating different types of traffic to them. Domestic routes again feature heavily with Japan’s top four domestic routes all ranked inside the top eight. 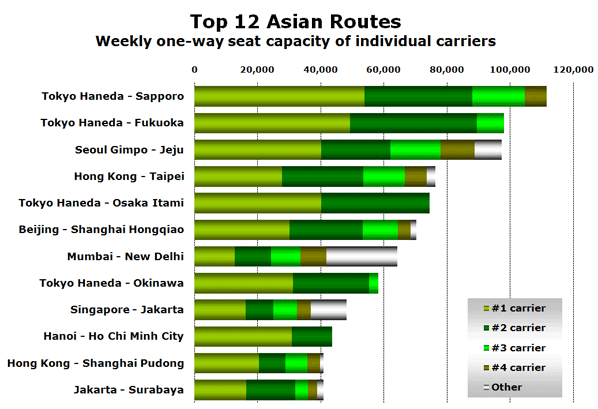 Compared with Europe there appears to be greater competition with no route a monopoly and just two routes a duopoly. Eight of the top 12 routes have at least four competitors while passengers wishing to travel between Mumbai and New Delhi have a choice of nine carriers, seven of which offer at least four daily flights.

The prominent position of the Hong Kong to Taipei route is partly due to traffic between China and Taiwan having had to travel via an intermediate point until relatively recently. As these restrictions are relaxed this international route may fall down the rankings.

The leading North American airport-pair routes are similar in size to those in Europe. Ten of the top 12 routes are in the US with two domestic routes from Toronto also making it. The top two routes from Los Angeles to San Francisco and New York JFK both offer a choice of at least four carriers with relative newcomer Virgin America the latest to join the fray. 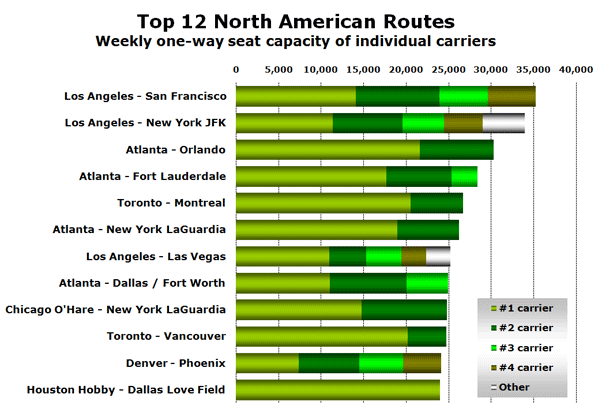 There is just a single monopoly route in the top 12. Southwest operates 176 weekly flights (that’s roughly 25 per day) between its home at Dallas Love Field and Houston Hobby. Of course, American and Continental both operate between Dallas and Houston as well, but their flights are between Dallas/Fort Worth and Houston George Bush.