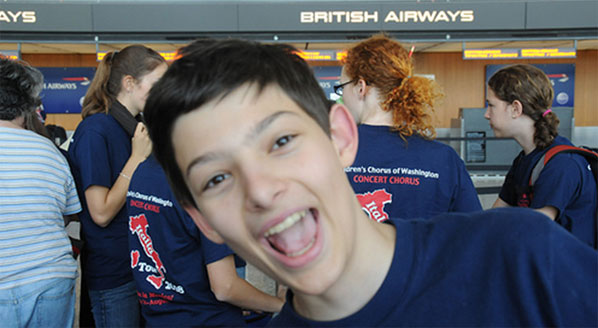 Mom and Dad are paying for this so who cares!? anna.aero wonders what particular events in London might be so appealing to Americans to justify the mystery spike on June’s Friday fares for Dulles-Heathrow travel. If any readers know please get in touch via our ‘comment’ option below.

According to the 2009 CAA Survey of UK airports around 30% of passengers travelling to and from the US from London Heathrow are on business while the rest are either visiting friends and relatives or travelling for leisure purposes. During the summer season, when the schools take a break and families can travel together for extended periods, the share of non-business travellers is likely to be even higher. Knowing this, revenue managers raise the ‘base’ fares considerably, to exploit the shifting balance between relatively unchanged supply and increased demand. 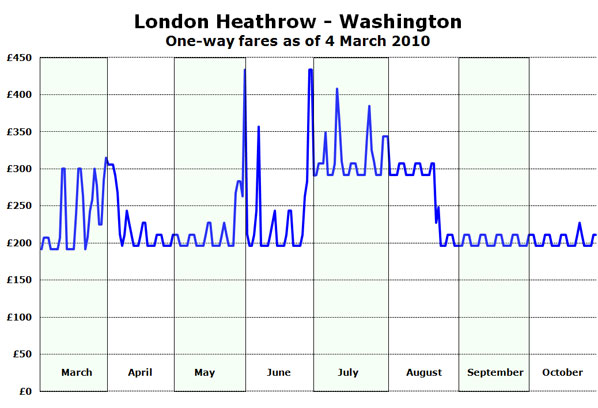 Looking first at outbound fares the summer holiday ‘premium’ period of July and August is clearly seen. From the end of June the cheapest outbound fare simply jumps by 50% from £196 to £292 (about $450), and does not return to below £200 ($300) until the 24th August. The thicker spike at the beginning of April coincides with Easter. Even when fares are reasonably flat, the small weekly humps indicate that for outbound flights from Heathrow on Friday, Saturday and Sunday there is typically a £15-£20 premium over the other days of the week. 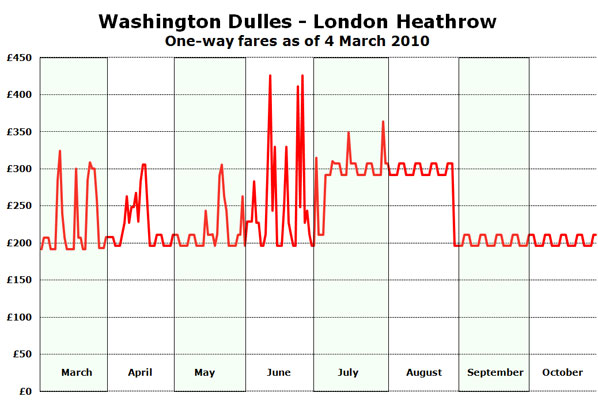 For inbound flights the summer holiday season now extends all the way to 29th August with sub-£200 fares only re-appearing from 30 August onwards. The early April spike for Easter has moved into a fairly thick spike in the middle of April, indicating the range of possible return dates for people who departed the UK at the beginning of the Easter period. June’s fares are curiously erratic ranging from the ‘normal’ base fare of £196 ($300), to over £400 ($600) on 11 June, 23 June and 25 June. The 11th and 25th are both Fridays suggesting that these fares are targeted at US travellers heading for the UK.

If any readers would like to suggest what particular events in London at that time of year might be so appealing to Americans to justify such a price spike do please get in touch via our ‘comment’ option below.