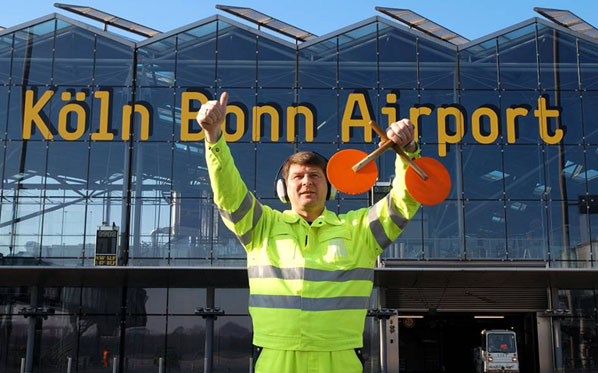 Cologne Bonn’s welcoming of LCCs has completely turned around the suggestion of a fall in traffic a decade ago. The airport’s passenger numbers doubled in only five years. (Photo: Cologne Bonn Airport)

Cologne (Köln) Bonn Airport is known as one of the main cargo airports in Europe, being a base for both UPS and FedEx, but its passenger operations perfectly illustrate the impact low-cost traffic has had in the European market.

At the beginning of the last decade, the airport was faced with issues such as the high-speed rail connection between Cologne and Frankfurt, which was opened in 2002 and resulted in the airport’s catchment area suddenly having fast access to the greater offering at Frankfurt Airport. Also, the capital city of Germany was moved away from Bonn in favour of Berlin in 1999, coinciding with the construction of Cologne Bonn Airport’s second terminal, which greatly increased airport capacity at a time when passenger numbers were starting to fall. 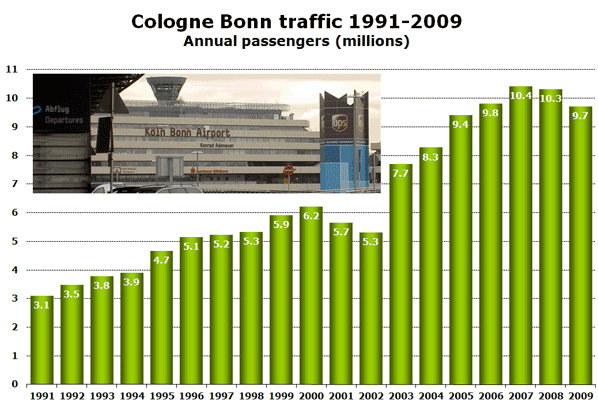 Although these setbacks ought to have affected airport traffic negatively, passenger numbers have in fact grown strongly and reached record-high levels by the end of the last decade. The annual figure almost doubled between 2002 and 2007, showing that the airport has successfully dealt not only with its situation, but has excelled. Improved train connections have not only resulted in traffic leakage to Frankfurt, but the 2004 completion of a train station at Cologne Bonn Airport has provided efficient connections on both high speed rail and commuter trains.

LCCs to the rescue; Lufthansa reduced to third place

Most importantly, the airport managed to attract the emerging low-cost carriers, which now make up nearly 80% of scheduled seat capacity during the peak summer season. It is these airlines that instantly turned the airport’s declining passenger numbers into a 45% growth in 2003. 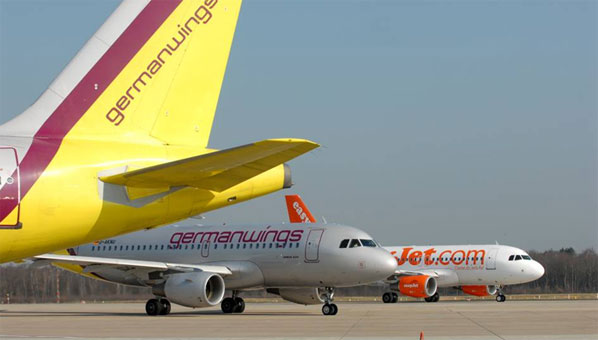 When Cologne Bonn was left with excellent facilities, yet spare capacity, low-cost carriers came to the rescue. The airport has attracted both foreign and local airlines, most notably locally-based germanwings, which instantly became the airport’s biggest airline. (Photo: Cologne Bonn Airport)

In 2002, not one but two German LCCs set up bases at Cologne Bonn Airport. Lufthansa backed germanwings instantly became the biggest airline at the airport, while Hapag-Lloyd Express (hlx) evolved into TUIfly.com, although recently it has shrunk its presence in favour of new partner airberlin. 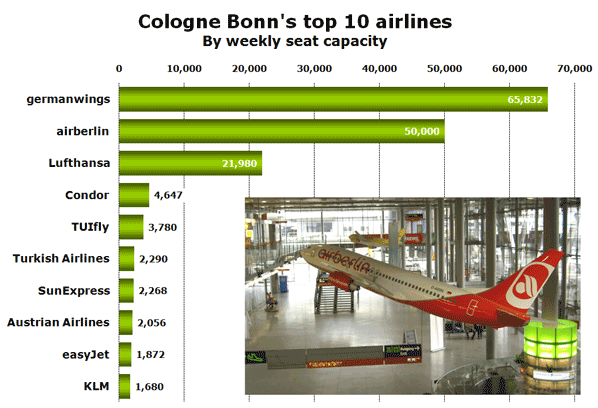 The three dominant airlines germanwings, airberlin and Lufthansa together have 84% of the market. Although Lufthansa is headquartered in Cologne, the German giant now only ranks as number three by capacity offered from the airport, having been the main carrier for decades. As the owner of germanwings, it does, however, still have a hold of the market, but the mainline capacity has halved in the last decade. The international network has been almost entirely abandoned. When Lufthansa soon hands the London Heathrow service over to bmi, its only international route out of Cologne Bonn Airport will be Paris CDG. The feeder service to Frankfurt was reduced after the opening of the fast train services, only to be dropped completely in 2007. The only domestic services remaining are to Munich, Berlin Tegel and Hamburg.

The airport’s traffic has a pronounced seasonality, with the peak summer month July reporting 84% more passengers than in February. 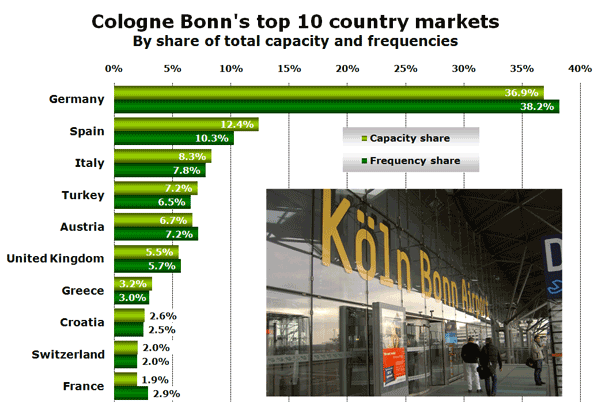 Domestic services dominate airport traffic with well over a third of both capacity and frequency. Other than a few key country markets – Austria, United Kingdom, Switzerland and to some extent France – the top international country markets in July are Mediterranean, summer sun destinations.

The airport no longer offers any long-haul services, after Continental Airlines pulled out of its service to Newark at the start of the financial downturn in 2008. The airport does, however, see great potential for transatlantic services as well as other long-haul services to South East Asia and importantly also China, as Cologne is the third-largest Chinese business centre in Germany with 200 locally based Chinese industrial and commercial companies.

In 2009, 13 new routes from Cologne Bonn Airport made it into anna.aero’s new route database, with germanwings acounting for 11 of the launches. This number excludes the many airberlin services that were launched to replace TUIfly as part of the two airlines’ new cooperative agreement.

This year, germanwings will be resuming services to Copenhagen, a destination that was dropped by SAS, by the start of the summer season, when Madrid services also will be relaunched. Both germanwings and airberlin are also commencing flights to Tel Aviv at the end of this month, replacing TUIfly on the route.