It is now 22 years since South Korea (officially known as the Republic of Korea) hosted the summer Olympics in Seoul and eight years since its joint hosting of the FIFA World Cup with Japan. Since then international air travel in the country has continued to grow though in recent years the successful development of a national high-speed rail system known as KTX has reduced demand for domestic air travel. Before the World Cup Seoul Gimpo was replaced as the country’s main international gateway by Seoul Incheon Airport, though Gimpo remains open for domestic flights and is still the country’s second busiest airport with 15.4 million passengers in 2009, compared with 28.5 million for Seoul Incheon. 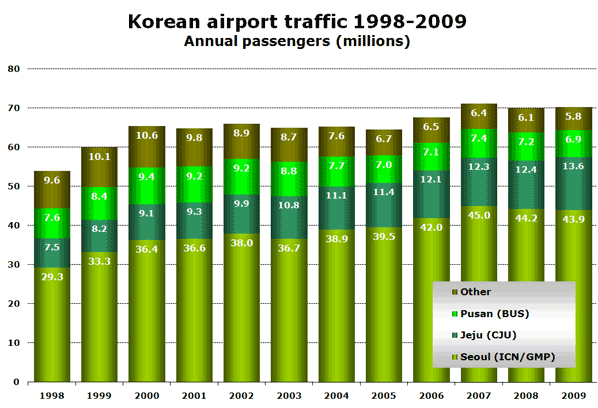 Jeju airport which is located on the island of Jeju to the south of Korea has also continued to grow thanks to its entertainment facilities and the fact that the mainland high-speed rail system has not impacted its domestic traffic. Since 2000 annual passenger numbers at South Korea’s mainland airports other than Seoul have fallen over 35% from 20 million to just 12.7 million in 2009. This is primarily down to the development of the KTX high-speed rail network that began operating in April 2004.

Not the kind of launch we normally celebrate: A second-generation “KTX-II” Korean bullet train entered service last week on the Seoul-Daegu high speed line. The KTX is the primary reason that traffic at South Korea’s mainland airports (except Seoul) has fallen over 35% since 2000. Other than for the island of Jeju, the domestic air travel outlook remains grim as more high speed rail is rapidly rolled out.

While domestic demand has fallen in recent years there are still 20 domestic air routes with scheduled services of which 16 are served at least daily. Korean Air operates on 18 of these routes and accounts for almost half of all domestic capacity, followed by Asiana with a further quarter. 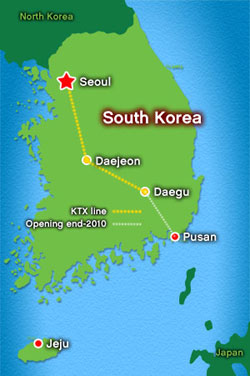 The Seoul Gimpo – Jeju route is served with over 80 daily departures operated by five different airlines each of which offer at least 10 daily flights. This route alone accounts for almost 40% of all domestic air traffic. The Seoul Gimpo to Pusan route still offers over 30 daily departures despite the presence of the KTX. This route represents a further 15% of domestic air traffic.

Located as it is between China and Japan it is no surprise that these two countries are the dominant international markets for non-stop air services from Korean airports. Korean carriers have more than half of all flights in both markets, and a dominant 70% on the Japanese market. On the third biggest country market to the US, Asiana and Korean Air operate 106 out of 118 weekly frequencies. The remaining 12 are split between Singapore Airlines (daily to San Francisco) and United Airlines (five weekly flights to San Francisco). 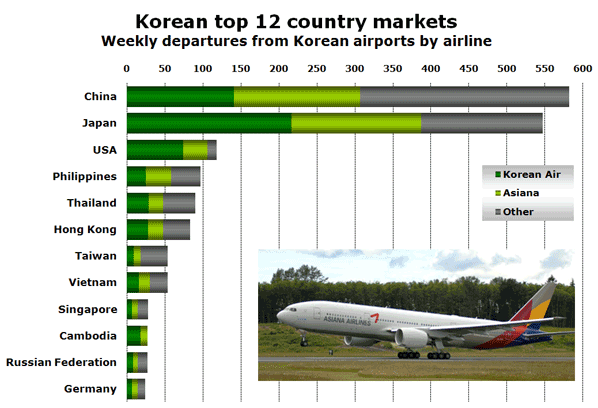 A total of 38 countries are served non-stop from Korea by 48 airlines. European countries served non-stop include Austria, the Czech Republic, France, Germany, Italy, Netherlands and the UK. However, among European carriers only Air France, Finnair, KLM and Lufthansa operate flights with Korean Air and Asiana operating the rest. Emirates and Qatar Airways both serve their home hubs but Etihad currently does not operate to Korea. Australian services are operated by just Korean Air (to Brisbane, Melbourne and Sydney) and Asiana (who also serve Sydney), while New Zealand is served daily by Korean Air to Auckland.

Across all international services Korean has a 43% share of total seat capacity, Asiana 25% and all non-Korean carriers having just 32%, led by JAL and China Eastern with just over 3% each.

Delta ‘returns’ to Seoul with Detroit flights from June

New services starting from Seoul Incheon in the coming months include Asiana to Ibaraki (a new airport in Japan) from 11 March, while Delta resumes what used to be Northwest’s non-stop flights to Detroit from 2 June. New Seoul Gimpo services include Jeju Air to Nagoya. So far this year Pusan has already seen new services from Asiana to Shenyang (China) and Korean Air to Siem Reap (Cambodia). Meanwhile, Air Busan will soon be starting services to Fukuoka and Osaka Kansai.