Route of the Week:
AirTran’s Orlando to Des Moines Des Moines Council Members Christine Hensley and Bob Mahaffy are presented with models of AirTran Airways’ 717s by the airline’s SVP HR Loral Blinde at the launch ceremony for the airline’s new weekend services from Orlando to Des Moines.

Cake of the Week:
AnadoluJet’s Ankara to Damascus Two cakes and a big delegation: The historical launch of three weekly flights between the capitals of Turkey and Syria – the first air service between the two cities in almost 30 years – was celebrated in Ankara by a group of dignitaries so large that two cakes were needed. Cutting the cake are Sami Alan, Turkish Airlines' president of regional flights; Syria's Ambassador to Turkey, Nidal Kabalan and his wife Wafa; and TAV Esenboğa's airport manager Nuray Demirer. 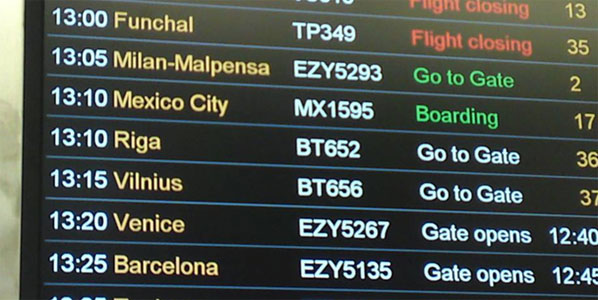 Exclusive to anna.aero: We managed to get hold of this picture of the departures board from moments before the first relaunched airBaltic flight from London Gatwick to Vilnius took place.