About this picture: SunExpress Managing Director and anna.aero reader Paul Schwaiger asked us to use these brand new pictures of the special “Istanbul ambassador” 737-800 which celebrates both the 20th anniversary of SunExpress and the fact that Istanbul is one of the Cultural Capitals of Europe in 2010. SunExpress invited teams of German and Turkish art students to realise their “impressions of Istanbul” in a special “Paint Book” design implemented by Lufthansa Technik. “We wanted to replicate the birth story of our company and show once again that collaboration, coexistence and a true teamwork of Turkish and German cultures can really make a bold difference” explains Schwaiger: “We hope it will be eye-catching everywhere in the world thus promoting this beautiful city to hundreds of millions of people.”

As regular readers of anna.aero will know, Turkey has been one of the most dynamic countries for air travel in the last couple of years. Turkish Airlines was the fastest-growing AEA member airline last year (passenger numbers were up 12.3%, capacity as measured by ASKs was up 24.3%) and Turkey’s airports handled 85.2 million passengers, an increase of 7.3% on 2008. One airline contributing to this impressive growth is SunExpress, a Lufthansa/Turkish Airlines joint venture which was formed in 1989 and will next month celebrate its 20th anniversary. 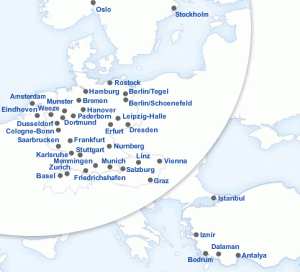 In recent years, the airline’s growth has accelerated thanks to the increasing popularity of Turkey as a holiday destination and the long-standing links between Germany and Turkey. In 2006, the airline handled 2.4 million passengers, which then grew to three million in 2007, 4.2 million in 2008 and 5.6 million in 2009. This year, it is targeting seven million passengers. Its current fleet consists of 17 737-800s (equipped in low-cost configuration with 189 seats) and three 757-200s (with 229 seats). A further five 737-800s are expected to join the fleet during 2010.

According to the airline’s on-line booking tool, a total of 74 routes are currently on sale, of which 31 are to/from the airline’s main base in Antalya. A further 14 serve Izmir. These include non-German routes to Amsterdam, Oslo, Stockholm, Vienna and Zurich. The airline’s newest base at Istanbul Sabiha Gökçen is now served from 12 airports in Germany plus Vienna and Zurich. Finally, Dalaman and Bodrum are connected to eight and seven German airports respectively.

With growth of 25% planned for this year, it will be interesting to see which other cities in Europe SunExpress will add to its network or whether growth will come purely from increasing frequency on existing routes. 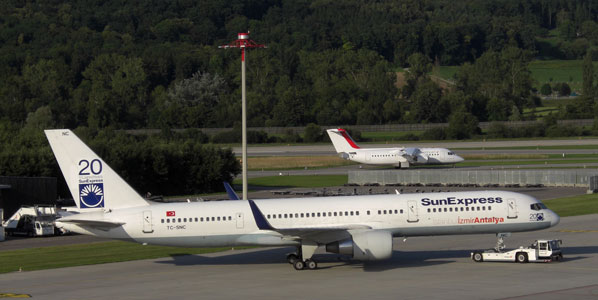 SunExpress celebrated its 20th anniversary by sending passenger numbers up by 32% in 2009. Most of its network involves linking German cities with Turkish destinations using 737s, but this is one of the airline’s 757s seen at Zurich. (Photo: Ralph Anker)