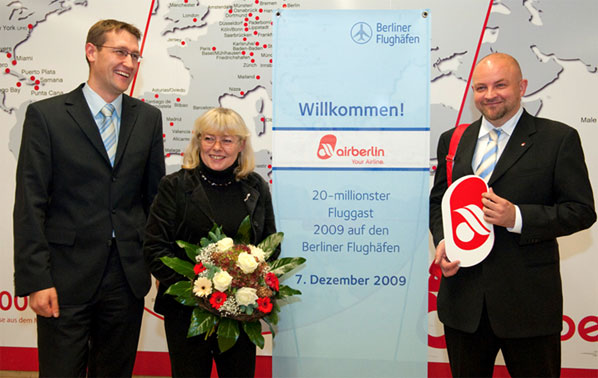 Berlin Airports’ 20-millionth passenger of 2009 – Dr Ewa Bojenko-Izdebska, professor of political science at the University of Krakow – was travelling on an airberlin service from Krakow to Berlin in December. Photo: Günter Wicker/Berlin Airports

According to anna.aero’s latest analysis of European airline schedule data airberlin now ranks fifth in terms of seat capacity offered at European airports, ahead of both British Airways and Iberia. Last year the carrier transported just under 28 million passengers. Its latest growth spurt has been achieved by taking over the ‘city’ network of TUIfly.com while remaining in competition with the airline on ‘leisure’ routes primarily to the Mediterranean.

The addition of the TUIfly city network has considerably increased airberlin’s presence at airports such as Cologne/Bonn and Hamburg. However, Berlin Tegel airport, located just a few minutes walk from the airline’s headquarters, remains the airline’s leading airport in terms of both flights and seat capacity. 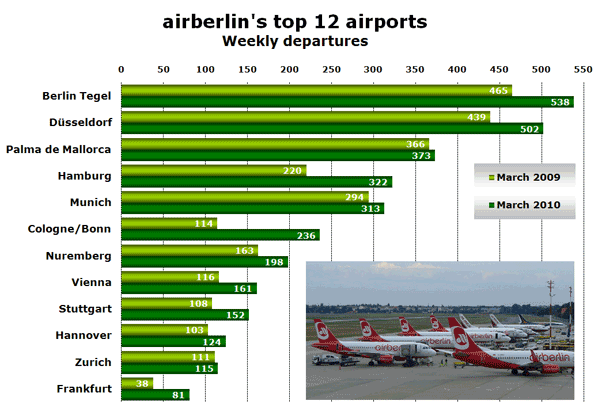 In the last 12 months airberlin has added several new routes from Berlin Tegel bringing the number of destinations served non-stop to 44. The airline has launched new destinations such as Krakow and Oslo as well as taking over TUIfly’s routes to Innsbruck, Klagenfurt, Memmingen and Salzburg. It has also begun longer-haul flights to Phuket and Tel Aviv. 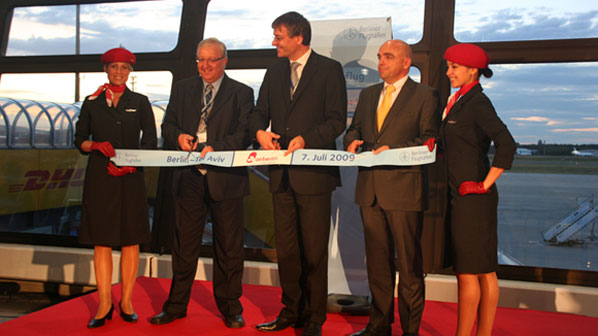 airberlin launched its first-ever scheduled flights to Israel last summer, with a twice-weekly service from Berlin Tegel to Tel Aviv. The service is operated with an A319. There are also feeder flights from various German cities.

Despite serving destinations in 17 foreign countries (including Cuba and the Dominican Republic), the airline’s 10 domestic routes account for almost 60% of its flights at Tegel. Austria, Spain and Switzerland each account for an additional 5% to 10% each. Of the airline’s top 10 routes at Tegel seven are domestic routes with Zurich, Vienna and Palma the leading international destinations. 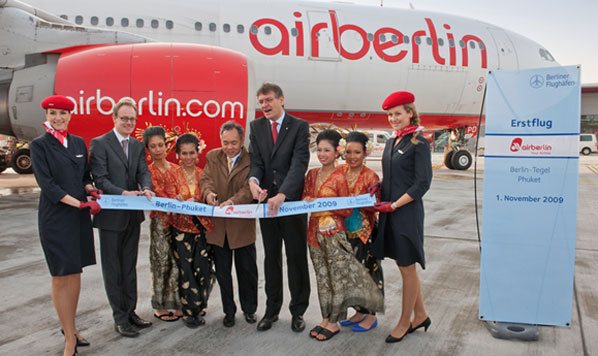 airberlin strengthened its presence in Thailand with the launch of a weekly service between Berlin Tegel and Phuket in November. The airline also serves Bangkok from Berlin. “We are offering our customers more direct flights and more destinations in Thailand and our Thai passengers have the option of a second direct flight to our attractive capital city,” said Matthias von Randow, Air Berlin’s director global traffic rights & political affairs. Photo: Günter Wicker/Berlin Airports

Among non-German destinations there are 11 that are currently served at least daily; Copenhagen, Helsinki, Milan Malpensa, Moscow Domodedovo, Palma, Paris Orly, Salzburg, St Petersburg, Stockholm Arlanda, Vienna and Zurich. airberlin does not currently operate any routes to the UK from Tegel having dropped its thrice-daily London Stansted service at the end of October 2008. This route had operated since September 2002 when airberlin (or Air Berlin as it was then) first launched its City Shuttle product. Manchester was briefly served in 2004/05.

Other destinations dropped in recent times include domestic routes to Bremen and Dortmund that were operated briefly on behalf of airberlin by Luftfahrtgesellschaft Walter (LGW) using Dornier 228s. These ceased in September 2008. 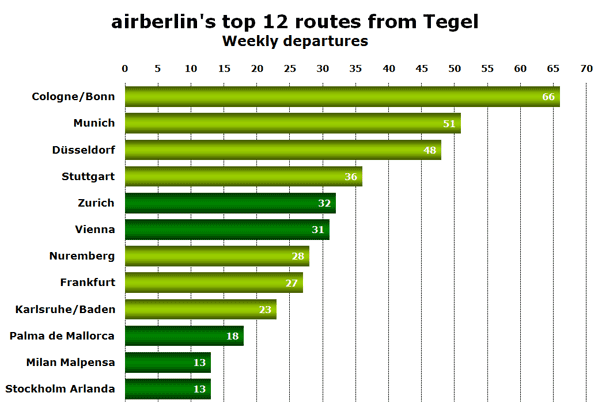 Over the course of the summer airberlin is launching several new seasonal routes. The only new year-round service appears to be Gdansk, which becomes the second Polish destination after Krakow, and will be served four-times weekly with a Q400. Venice, previously a TUIfly.com route, will be operated daily but only during the summer season. Graz in Austria will be served five times weekly in direct competition with Intersky. The remaining new routes to Bari, Brindisi, Calvi, Chania, Reykjavik and Visby will all be served just once or twice weekly.