The debut 2010 F1 Gulf Air Bahrain Grand Prix on Sunday. In terms of international seats Bahrain ranks fourth in the Middle East just behind Abu Dhabi but beats it for international flights. The Etihad Airways Abu Dhabi Grand Prix is fittingly the last race of the season on October 31.

Since anna.aero last looked at the “Middle East Big 3” (MEB3) airlines of Emirates, Etihad and Qatar Airways back in December there have been relatively few route developments. Emirates and Etihad who had both suspended their flights to Peshawar in Pakistan at the end of last year for security reasons have now both re-instated them. Etihad launched flights to Colombo on 1 January and also began serving Japan for the first time by starting Nagoya flights via Beijing. Meanwhile, Qatar Airways began serving Bengaluru/Bangalore on 22 February and re-started non-stop Jakarta services which were previously operated via Singapore. However, Casablanca which used to be served non-stop is now served daily via Tripoli in Libya instead. Since our last analysis three months ago Emirates has increased its non-stop flights by 1.8%, Etihad by 6.2% and Qatar Airways by 6.3%.

During the remainder of 2010 Qatar Airways has so far announced plans to add five new destinations as non-stop services. These are Ankara, Barcelona, Buenos Aires, Copenhagen and Sao Paulo. In addition Tokyo Narita will be added to the network (but will be served via Osaka Kansai), while Seoul Incheon will be served non-stop for the first time instead of via Osaka Kansai.

Emirates is planning to add Amsterdam, Dakar, Madrid, Prague and Tokyo Narita as new non-stop destinations before the end of the year. Etihad has also revealed plans to add Tokyo Narita. 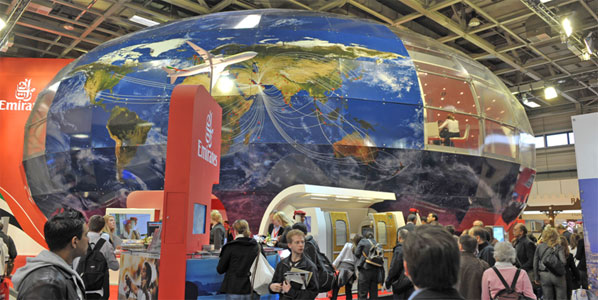 The big Emirates globe at ITB Berlin last week. Emirates is planning to add Amsterdam, Dakar, Madrid, Prague and Tokyo Narita as new non-stop destinations before the end of the year.

Last weekend the sporting media was focussed on Bahrain as the 2010 Formula 1 season got underway. In terms of international seat capacity Bahrain ranks fourth in the Middle East only just behind Abu Dhabi but beats Abu Dhabi for international flights. However, Gulf Air is far less dominant in Bahrain than Etihad is in Abu Dhabi.

In fifth place is Kuwait City where Jazeera Airways is now close to overtaking Kuwait Airways as the airport’s busiest carrier. Both Jeddah and Riyadh serve more passengers than Bahrain and Kuwait City but a significant share of their traffic is domestic traffic within Saudi Arabia.