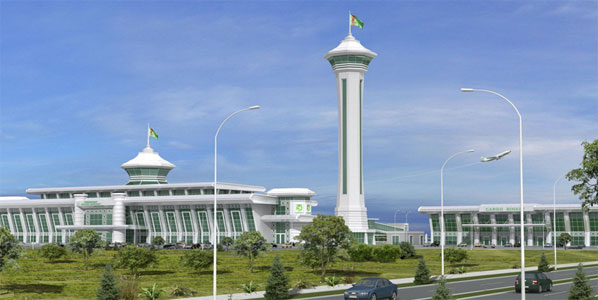 Nice new airport!!! They like their buildings to really stand out in Turkmenistan - Turkmenbashi Airport, 500km west of the capital on the coast of the Caspian Sea, is being modernised and expanded with new terminals and a 3,500 metre runway so it can accept international services. Siemens has a €27 million contract for all electrical and airport-specific systems. 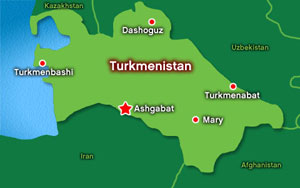 Before achieving independence in October 1991, Turkmenistan had been a republic of the Soviet Union. Similar in size to Spain, but with a population of approximately five million, it shares borders with Afghanistan, Iran, Kazakhstan and Uzbekistan as well as having a coastline along the Caspian Sea. The country was led between 1985 and 2006 by “President for Life” Saparmurat Niyazov.

The country’s capital is Ashgabat (also spelled Ashkhabad), located close to the southern border with Iran, and served by a relatively new airport opened in 1994 named after the country’s first president. Unsurprisingly, Turkmenistan Airlines is the dominant carrier, operating a very mixed Boeing fleet including four 717s, nine 737s of various types, and four 757-200s. It also operates a 767 on behalf of the government. It currently has two 737-900ERs and a 777-300ER on order. 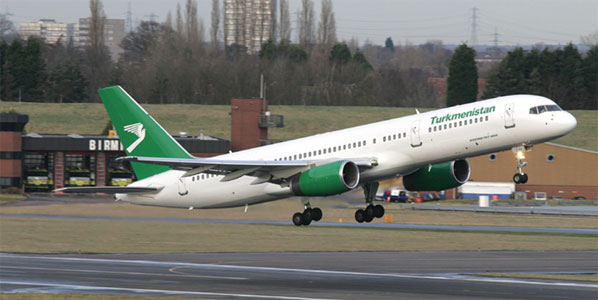 Analysis of schedule data reveals that Istanbul is the leading international scheduled destination from Ashgabat with 16 weekly departures, 11 of which are operated by Turkish Airlines, followed by Moscow. 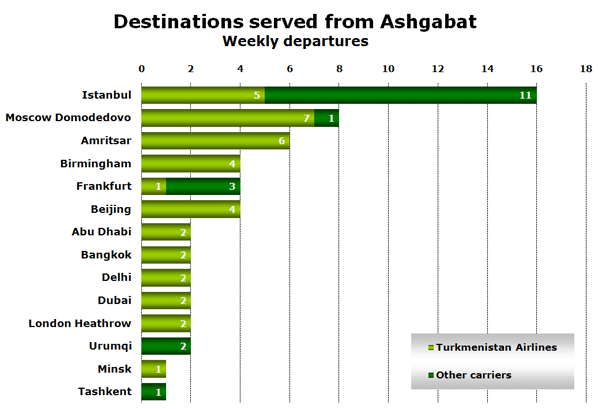 Moscow is followed by Amritsar, which connects to Turkmenistan’s Birmingham service with the Indian city, providing almost all the traffic on the route, explaining why Birmingham has twice as many weekly flights as London (Heathrow) and 50-60,000 annual passengers. 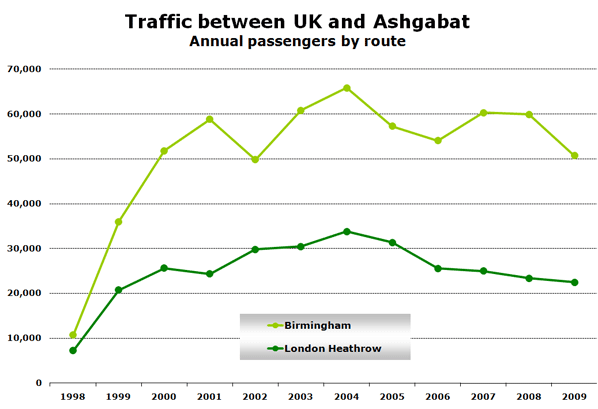 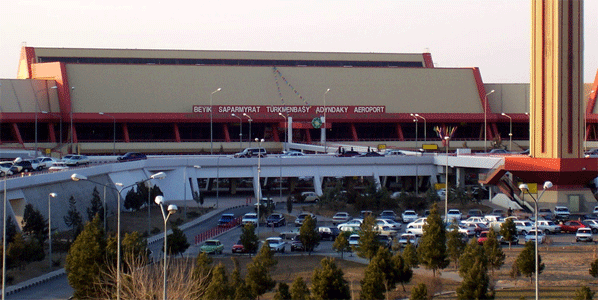 Ashgabat’s Beyik Saparmurat Turkmenbashi Adyndaky International Airport, or give your travel agent the ASB three letter code. The new terminal was built in a consortium of John Laing International (UK), Alarko and Burç Electronics (both from Turkey) and Lockheed. 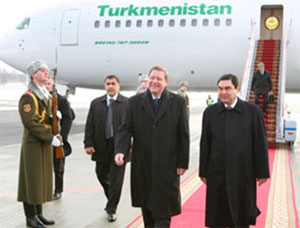 Janauary: President of Belarus, Alexander Lukashenko, greets the Turkmen head of state. Gurbanguly Berdymuhamedov, who has Turkmenistan’s sole 767 at his disposal. Although all-Boeing, the airline has a curious mix of at least five types with two 737-900ERs and a 777-300ER on order.

Other data from Destatis in Germany reveals that the Frankfurt route has generated 20-25,000 annual passengers during the last few years. Lufthansa, which currently operates thrice-weekly service via Baku in Azerbaijan, is one of a handful of non-local airlines serving Turkmenistan. Siemens’ engineers, who have a €27 million contract at the coastal airport of Turkmenbashy, must be frequent users. Apart from the already-mentioned Turkish Airlines, the only other foreign carriers operating scheduled services at present are China Southern Airlines to Urumqi, S7 to Moscow, and Uzbekistan Airways to Tashkent.

The national carrier also operates domestic flights from Ashgabat to Dashoguz (TAZ), Mary (MYP), four daily flights to Turkmenabat (CRV) and Turkmenbashi (KRW). The airline’s 717s are used for these routes, but their schedules are not listed in OAG. The airline must now also be one of the few international carriers that lacks a website. Hopefully this will soon change.