Ryanair has now overtaken Lufthansa to be the biggest carrier offering seats at European airports while easyJet has passed Air France for third place. Perhaps most astonishingly airberlin (not defined as a low cost carrier by anna.aero) jumps up to fifth place in an overtaking manoeuvre passing British Airways, Iberia and SAS!

Analysis of airline schedule data provided to OAG for the beginning of the imminent summer season (starting Sunday 28 March) indicates that seat capacity at Europe’s over 620 airports is up 4.6% compared with last year. This time last year capacity was down around 4.8% compared with 2008 so these latest figures suggest that capacity is almost, but not quite back to the levels of 2008. If load factors were to be up one to two percentage points then passenger numbers through Europe’s airports may be very similar overall to the levels achieved two years ago, at least in April and May. While total seat capacity is up 4.6% the number of aircraft movements is up just 2.3% reflecting a further increase in the average size of aircraft from 128 to 131 seats.

A more detailed look at Europe’s busiest airports shows that among the top 20 only five airports are not reporting capacity increases compared with last April. These five airports are Amsterdam, Dublin, London Heathrow, London Stansted and Paris CDG. In the case of Amsterdam and Heathrow the decline is less than 1% but at Dublin, capacity is down 9% as Ryanair has cut routes, frequencies and reduced based aircraft in protest at the government’s €10 ‘Tourism Tax’. Paris CDG is down around 4% as Air France has cut capacity by around 5%.

Seven airports are reporting capacity growth of at least 8%, led by a recovering London Gatwick and Vienna. Vienna is benefiting from airberlin and Niki’s expansion plans as they take on Austrian. The national airline now under Lufthansa control has increased seat capacity by 19% primarily on Western European routes such as Berlin, Milan, Paris, Stuttgart and Zurich. Major Eastern European centres such as Bucharest, Sofia and Warsaw have also received increased capacity. 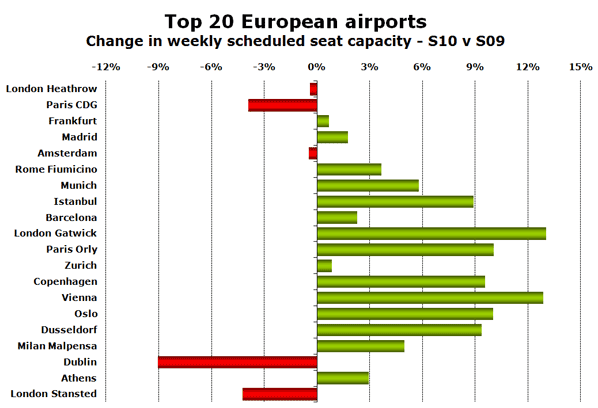 Analysis of the top 25 country markets across Europe shows that 19 of them are reporting year-on-year capacity growth. The biggest country markets to still be shrinking are Sweden and Ireland. Sweden has suffered as a result of SAS’ on-going difficulties and although Norwegian is now making inroads on some international routes and Ryanair’s Skavsta base continues to grow, overall capacity is still down.

Among the larger Central European countries Poland has bounced back to growth and Romania continues to thrive thanks to the likes of Blue Air and Wizz Air. However, the Czech Republic, Hungary and Ukraine are all down versus last year. 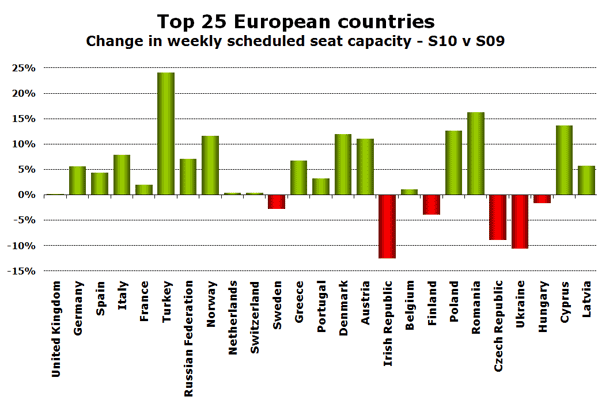 Turkey’s growth may be slightly overstated as some of the local airlines (such as Pegasus) are now reporting their schedules in more detail than they did in early 2009. However, traffic statistics for Turkish airports in January and February confirm that passenger numbers are up between 25% and 30%.

Outside of the top 25 Lithuania is recovering from the demise of its national airline in early 2009 and this summer capacity is up almost 50%. However, Slovakian airport capacity is down 17% after the collapse of SkyEurope in the second half of last year.

Many flag-carriers still getting smaller

Among Europe’s top 40 airlines (as measured by seat capacity at European airports) the results are mixed. A total of 18 carriers are reporting year-on-year capacity reductions. Twelve of these 18 airlines could be considered flag-carriers while most of the others are traditional rather than low-cost airlines.

Dropping out of last year’s top 40 are TUIfly.com (whose ‘city’ network has been taken over by airberlin), clickair (which has now merged with Vueling, hence that airline’s 100% growth) and bmibaby which has seen capacity reduce by around 25% as new owners Lufthansa figure out what to do with the low-cost airline. 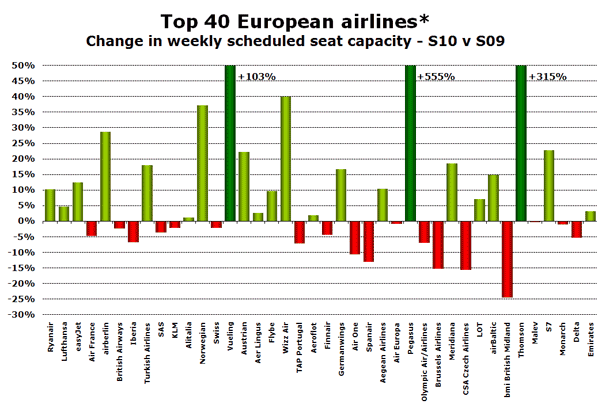 Ryanair has now overtaken Lufthansa to be the biggest carrier at European airports while easyJet has overtaken Air France for third place. airberlin in fifth place has overtaken British Airways, Iberia and SAS. The extreme growth of Pegasus is misleading as the airline did not report all of its route network to OAG last year. Among other LCCs both Norwegian and Wizz Air continue to report impressive growth as they spread their networks across more bases in Scandinavia and Central Europe respectively. Creeping into the bottom of the top 40 is Emirates, the second carrier in the rankings (after Delta) not to be based in Europe.

It is worth noting that of last summer’s top 40 airlines at European airports none have failed, despite the historical severity of the recession.