Turkish Airlines launched a daily service between Istanbul Atatürk and Bologna on 1 March. Meanwhile, last week it was announced that it had become the official airline partner of Manchester United football club.

Traffic statistics for the carriers belonging to the Association of European Airlines (AEA) reveal that passenger numbers fell by 5.8% in 2009. Traffic as measured in RPKs (revenue passenger kilometres) only fell by 4.5% while capacity as measured in ASKs (available seat kilometres) fell just 4.2% resulting in the average load factor falling by 0.3 percentage points to 76.0%.

During the second half of 2009 the traffic declines were not as great and by December passenger numbers were up once more on a year-over-year comparison, thanks to a two percentage point improvement in load factor. This trend has continued into 2010 with capacity down 2% in January but passenger numbers up 1.8% resulting in a 2.5 percentage point load factor improvement.

The recovery in traffic was driven by the stabilisation in demand for cross-border European traffic and a return to growth in the domestic market. Traffic to Asia and North America is still down on a year-over-year basis. 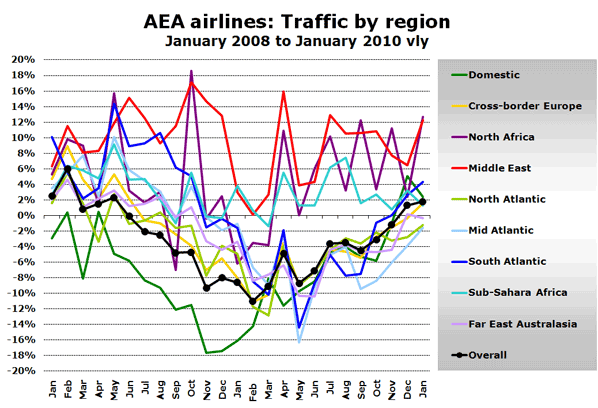 Passenger numbers on routes to and from the Middle East continued to grow by between 6% and 12% during the second half of 2009 with African routes also reporting increased demand. Malev was one of three AEA member airlines to report increased passenger numbers in 2009. The airline began daily services between Budapest and Belgrade on 14 December. The route is operated using 72-seater Q400s. 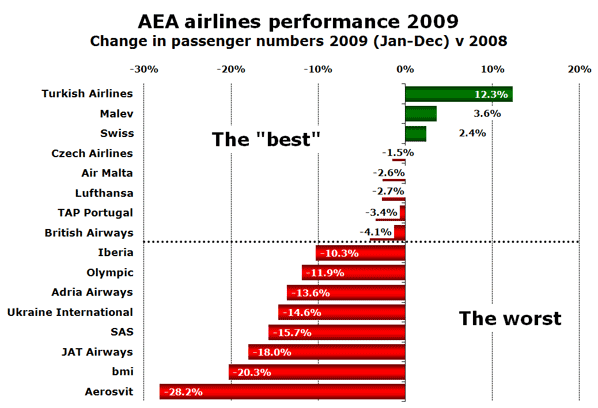 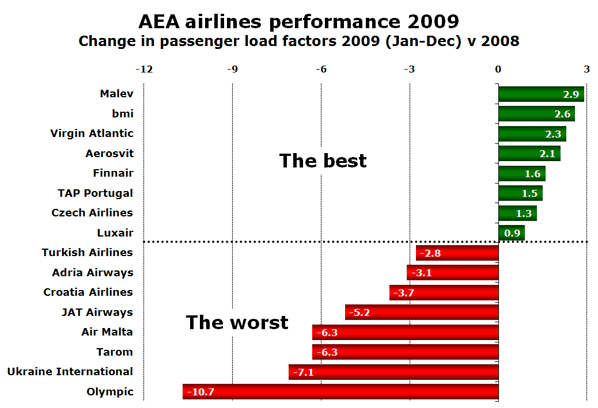 A comparison of average load factors in 2009 with 2008 reveals that some of those airlines who cut capacity most (Aerosvit and bmi) also saw their load factors improve by the largest amount. Malev’s achievement is laudable as it not only increased passenger numbers by 3.6% but also managed to improve its load factor by 2.9 percentage points. However, capacity (ASKs) was actually down 17% after the airline abandoned its long-haul flying during 2008.

AEA member airlines claim nine of the top 12 positions among Europe’s largest airlines (as measured in passenger numbers) in 2009. However, three of the top six positions are filled by non-AEA airlines with Ryanair leading the way with over 65 million annual passengers. 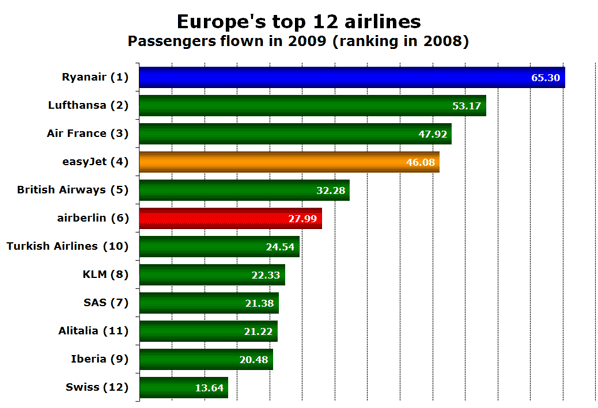 The top six positions have remained unchanged since last year but Turkish Airlines has risen three places from tenth to seventh. Iberia and SAS have both slipped two places while the ‘new’ Alitalia has overtaken Iberia for tenth place.