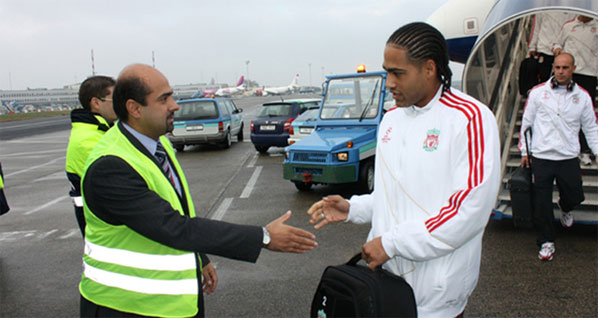 Liverpool Football Club’s Glen Johnson gets a taste of Budapest’s typical customer service with an individual greeting off the steps by Kam Jandu, director aviation, Budapest Airport, as he arrives ahead of last November’s Champions League tie with Debrecen. (Liverpool won 1-0 but it was not enough to prevent their exit from the tournament). 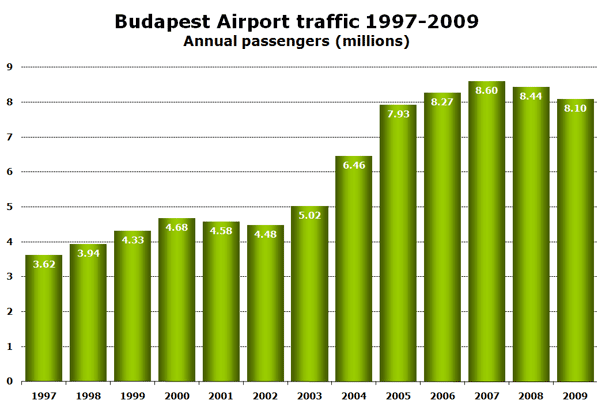 Budapest’s seasonality profile has remained virtually unchanged since 2005, with passenger numbers in the peak summer month of August typically twice as high as those reported in February. For the last three months, passenger numbers have been up compared with the some month in the previous year. 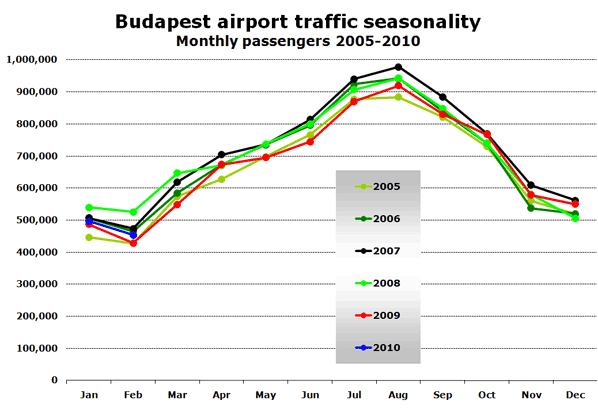 Malév dominant with half of all flights; Wizz Air adding new routes Malév operates nearly half of all flights and 45% of seats to and from Budapest. The airline launched daily services between Budapest and Belgrade in December after a break of 17 years.

This summer, 32 airlines will be operating scheduled services to and from Budapest with Malév not surprisingly the dominant carrier, operating nearly half of all flights and 45% of seats.

Other flag carriers serving the airport are Air France, Aeroflot, Alitalia, Austrian, Brussels Airlines, Czech Airlines, Finnair, LOT, Swiss, TAP Portugal and Tarom. However, Iberia, KLM and SAS are notable absentees. Other airlines with a presence at the airport are germanwings, Jet2.com, Norwegian, Ryanair and Vueling. 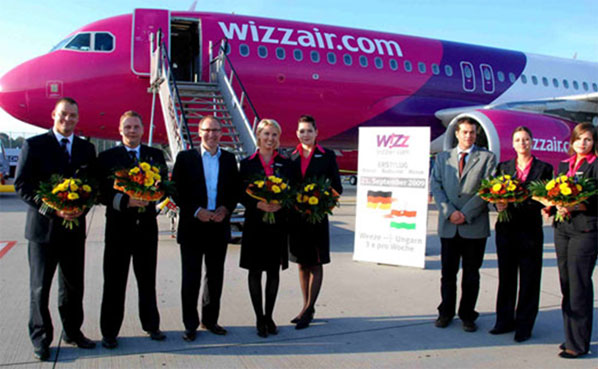 This summer, Wizz Air increases its range of destinations from Budapest to 20 with the seasonal re-start of services to Bourgas, Corfu and Palma plus a new route to Pisa. It launched a three times weekly service between Budapest and Düsseldorf Weeze in September.

Budapest is Wizz Air’s home base where it is the number two carrier. Although some distance behind Malév, Wizz Air is building steadily and this summer increases its range of destinations from 16 to 20 with the seasonal re-start of services to Bourgas, Corfu and Palma plus a new route to Pisa starting on 1 July. Forli (Italy) and Turku (Finland) are both new routes starting at the end of March. Another new route starting this summer is Hannover, which will be operated thrice-weekly by germanwings.

Since April 2008, Budapest airport has seen its fair share of changes with regard to new services as well as the closing of several previously operated routes.

In addition to the above, a number of other services started and ended between April 2008 and April 2010. These include flyLAL to Vilnius, Malév to Iasi and St Petersburg, SkyEurope to Trieste, and Wizz Air to Dortmund and Oslo Torp. SkyEurope operated a base at the airport between November 2003 and the end of the 2007 summer season. During that last summer, it served as many as 19 destinations from Budapest, including daily flights to Amsterdam, Bucharest, Milan Bergamo, Paris and Rome. The €200 million SkyCourt is one of the focal points of Budapest’s modernisation programme. The project, scheduled for completion by the end of 2010, involves construction of 40,000sqm of new terminal areas and refurbishment of 55,000sqm of existing facilities.

Based on current schedule data, Germany is the leading country market from Budapest, followed by the UK and Italy. easyJet, germanwings, Lufthansa, Malév and Wizz Air all operate flights to Germany, while UK services are provided by British Airways, easyJet, Jet2.com, Malév, Ryanair and Wizz Air. In 2008, German routes generated 1.42 million passengers while UK routes accounted for a further 1.06 million. Last year, the UK market fell by just under 10% to 960,000 passengers. 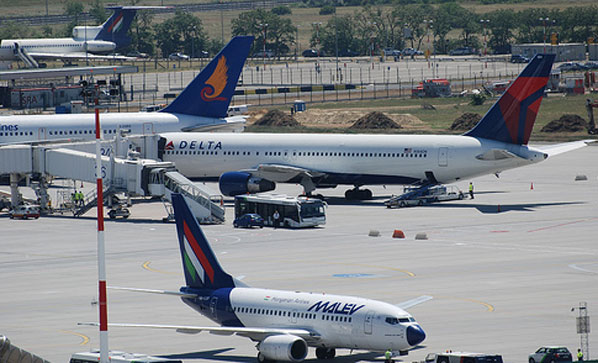 Long-haul to Beijing and New York

Since Malév abandoned its long-haul network during 2008, long-haul operations at the airport have been limited to Delta serving New York JFK and Hainan Airlines flying four-times weekly to Beijing. None of the MEB3 airlines (Emirates, Etihad and Qatar Airways) currently serves Budapest from Middle East bases though Malév operates to Amman, Beirut, Damascus and Tel Aviv.