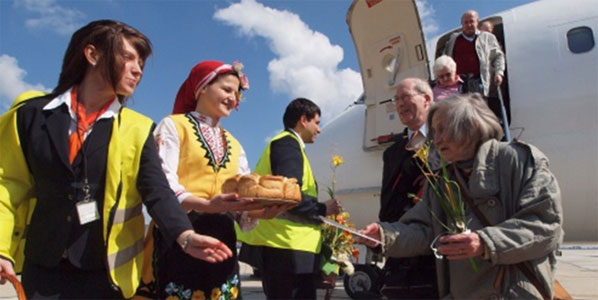 The first passengers of the 2010 summer season: 164 German tourists were given a special welcome upon arrival at Varna Airport last week. The airport is expecting an increase in the number of visitors from Russia, Poland, and the Czech Republic this summer and, for the first time, will welcome charter flights from Denmark (Photo credit: Sofia News Agency/BGNES)

Passenger demand at Bulgaria’s three main international airports trebled from 2.2 million in 2000 to over 6.6 million in 2008 before falling by 9% in 2009 to just over six million. Growth since 2004 has focussed mostly on Sofia while traffic to the Black Sea ‘summer sun’ destinations of Bourgas and Varna (both now operated by Fraport) has not grown anything like as quickly. Until 2003 Varna was the busier of the two airports but by 2009 Bourgas was handling around 40% more passengers. During the first two months of 2010 Sofia’s traffic has been at exactly the same level as 2009. 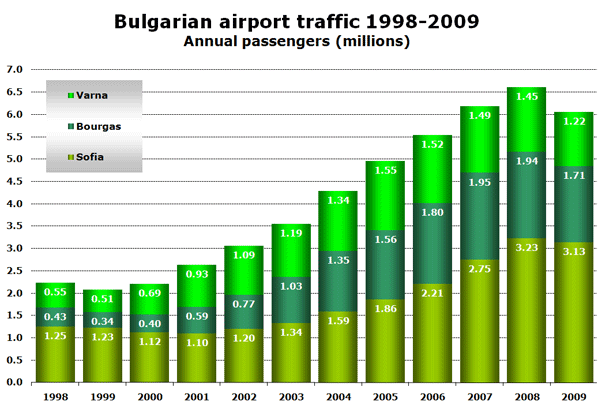 While Sofia’s traffic is year-round thanks to serving as the gateway to the Bulgarian ski market, Bourgas and Varna are much more seasonal. In fact, last summer Bourgas’ peak month of July saw the airport handle 50% more passengers than Sofia in its peak month of August. 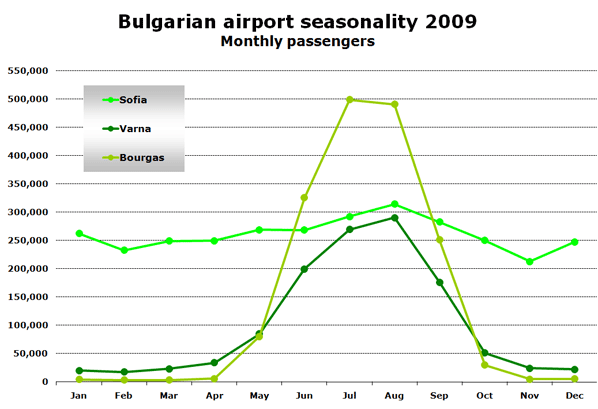 In 2009, the UK was responsible for around 18% of the traffic at Bourgas airport with 306,000 passengers. However, around 85% of these were travelling on charter flights operated by both UK and Bulgarian carriers. This winter the only scheduled services at Bourgas are with Wizz Air to London Luton and with Bulgaria Air to Sofia (via Varna). Varna has a few more scheduled services in winter including flights to Budapest (with Malev), Moscow (with S7) and Vienna (with Austrian). Wizz Air (Bulgaria) provides competition for Bulgaria Air on the key route to Sofia. The Sofia Airport Center – which includes 100,000sqm of office space and a 250-room high quality hotel - is currently under construction alongside the airport.

Since anna.aero last analysed Bulgaria Bulgaria Air has seen a further reduction in its market share at Sofia Airport. Its share of seat capacity this summer is now below 25% and it offers scheduled flights to just 20 destinations across Europe with its mixed fleet of Airbus, Boeing and BAe aircraft. 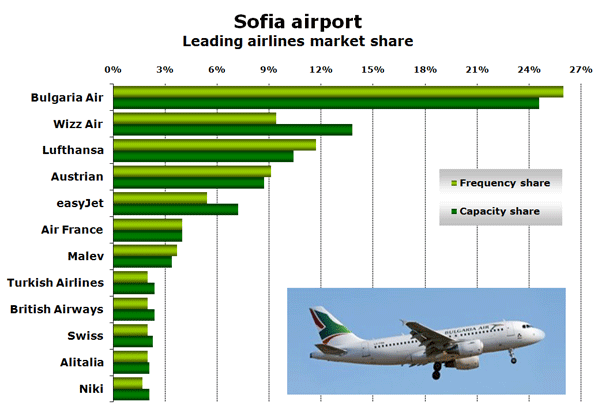 Wizz Air’s network has grown from three to nine routes though only London Luton is served daily. According to the airport, Bulgaria Air had a 26% share of all passengers in 2009 followed by Wizz Air (15%) and Lufthansa (11%). London is by far the busiest route with over 200,000 annual passengers while no other city generates more than 70,000 annual passengers. British Airways, Bulgaria Air, easyJet and Wizz Air all compete for passengers between these two cities with BA and Bulgaria Air serving London Heathrow, easyJet serving London Gatwick and Wizz Air flying to London Luton. New routes in 2009 were Brussels Charleroi, Eindhoven and Venice Treviso (all served by Wizz Air) and a weekly flight with Hamburg International to Berlin Schönefeld.

The demise of MyAir and SkyEurope resulted in the loss of flights to Milan Bergamo (now served by Wizz Air), Prague (still served by Czech Airlines), Vienna (still served by Austrian and Bulgaria Air) and Venice Marco Polo, while Aer Lingus and Baboo have also terminated services to Dublin and Geneva respectively. A total of 25 airlines currently operate scheduled services at the airport but these do not include Iberia, KLM or SAS. While easyJet serves the Bulgarian capital from London Gatwick, Madrid, Manchester and Milan Malpensa, there is no sign yet of Ryanair entering the Bulgarian market. 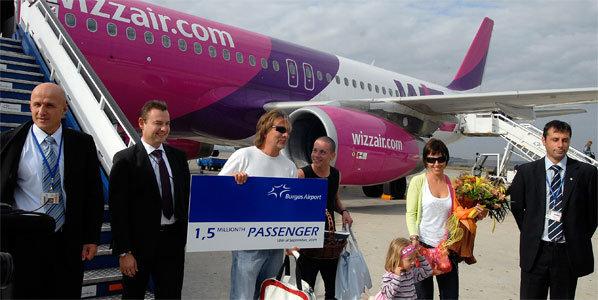 Bourgas Airport celebrates its 1.5 millionth passenger of 2009: Fraport Twin Star Airport Management – which won the 35-year concession of both Bourgas and Varna airports in 2006 – will invest over €400m in improving and expanding the two coastal airports over the entire concession period. The major share will go into new passenger terminal buildings as well as expanding the apron areas and taxi ways at both airports. In November 2009, Fraport signed a contract with the Halcrow Group and Pascal & Watson for the design of new terminals at both airports. Construction work is expected to start by the beginning of next year.

New routes already launched to Sofia in 2010 include Niki’s new service to Vienna (in competition with Austrian and Bulgaria Air) while Cimber Sterling begins twice-weekly flights from 1 April to Copenhagen. Wizz Air will further consolidate its position at the airport with the introduction from 22 May of four new routes to Forli, Frankfurt Hahn, Madrid and Paris Beauvais. Since Ryanair has a significant presence at all of these airports it will be interesting to see if these latest developments go unchallenged. Bulgaria Air will begin serving Milan Malpensa from the start of the summer season (competing with easyJet) as Alitalia apparently withdraws from the route.