Short-haul services may have blossomed since many Central European countries joined the EU but long-haul flights appear to have suffered. CSA Czech Airlines (2009), Malev (2008) and Tarom (2003) have all abandoned their non-stop services to New York.

In 2004 and 2007, a significant number of Central European countries became members of the European Union (EU). For most of these countries, the resultant liberalisation of air traffic services to and from Western Europe has had a positive effect on the demand for air travel as low-cost carriers in particular have been able to take advantage of considerable pent-up demand for short-haul travel to and from the region (coupled with the first real-large scale migration of labour in the EU’s free market for jobs). But what changes have there been in the long-haul market where air service agreements have still been dominated by individual bilaterals?

For the purposes of this analysis, Central Europe will be defined as all those countries starting with Estonia in the north, running down through the other Baltic states, through Poland and down to Albania, the Former Yugoslav Republic of Macedonia and Bulgaria.  Many (but by no means all) of these states are now members of the EU. The busiest airports in this region in 2009 were Prague (11.6 million passengers), Warsaw (8.3 million) and Budapest (8.1 million). Long-haul destinations will be considered those in Asia, North or South America, sub-Saharan Africa and the Middle-East beyond Kuwait (thus including the major Middle Eastern hubs in and around the United Arab Emirates). 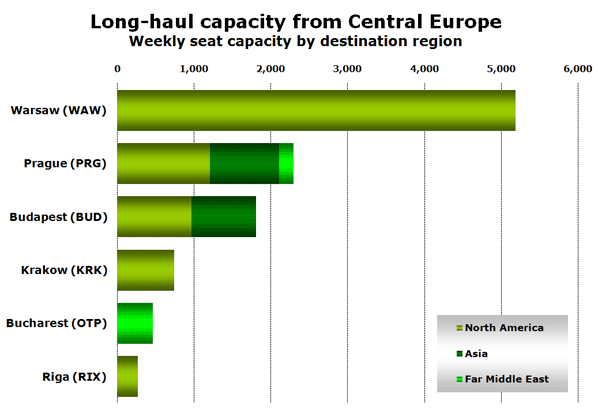 The busiest airport for long-haul services is Warsaw, which currently has direct non-stop flights with LOT to Chicago O’Hare, Newark, New York JFK and Toronto. At Budapest, there are Delta flights to New York JFK (started in 2006) and Hainan Airlines flights to Beijing (started in 2004), while from Prague Delta operates to New York JFK, Korean Air flies from Seoul Incheon and Smartwings operates weekly to Dubai. In summer, Delta also serves Prague from Atlanta. Krakow has non-stop services with LOT to both Newark and Chicago O’Hare. During the peak summer period, LOT operates weekly non-stop flights to both Newark and New York JFK from Rzeszow, one of the smaller regional airports in Poland.

None of the ‘MEB3’ airlines of Emirates, Etihad or Qatar Airways currently operates to anywhere in Central Europe, although Emirates has announced plans to begin daily Prague services from Dubai on 1 July. 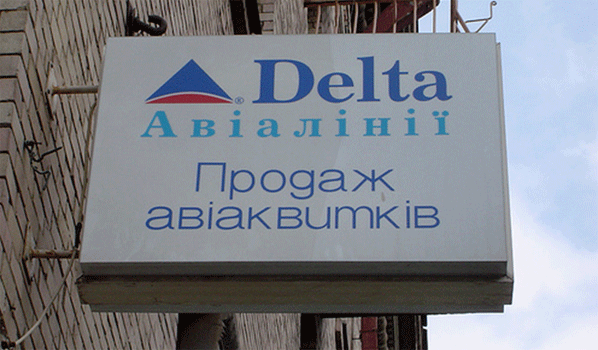 Delta in Kiev – services to Prague and Budapest make it the biggest long haul player in Central Europe after LOT.

In recent years, three of the four leading ‘legacy’ carriers in Central Europe have effectively dropped all of their long-haul services. Czech Airlines (Prague), Malév (Budapest) and Tarom (Bucharest) have all grounded and/or sold their long-haul fleet and focussed instead on their European networks. Long-haul scheduled services dropped since 2000 operated from airports in Central Europe are summarised below.

Tarom was the first to abandon the long-haul market in 2003 (although it does serve Dubai thrice-weekly using a 737-700 but this sector is less than 3,500 kilometres), while Malév announced its retreat from the long-haul market in July 2008. SkyTeam member Czech Airlines abandoned its New York and Toronto routes as recently as last year.

airBaltic serves Dubai but only in winter

One carrier in Central Europe that appears to have ambitious network growth plans is airBaltic. In December 2006, it began winter seasonal flights lasting over seven hours from Riga to Dubai using a 737. Last winter, it was still operating this service twice-weekly, but with a larger 757. Recently announced plans to serve Tehran this summer were mysteriously withdrawn with no official explanation (although a comment posted on anna.aero alleged this was a result of pressure from the US government). Its longest summer routes are to Almaty (Kazakhstan), Dushanbe (Tajikistan) and Tashkent (Uzbekistan), all of which are under 2,500 miles (4,000 kilometres) in length and thus not really long-haul routes.