November: Arrival in Khartoum – astonishingly, considering Chinese interest in Africa, Hainan Airlines is one of only two mainland carriers to serve the continent. Hainan also serves Luanda – both via Dubai – while China Southern flies Beijing-Lagos.

Hainan Airlines, which just became the first Chinese carrier to be awarded four stars in Skytrax’s latest survey, is known for being almost 20% owned by the Hungarian-American billionaire George Soros. 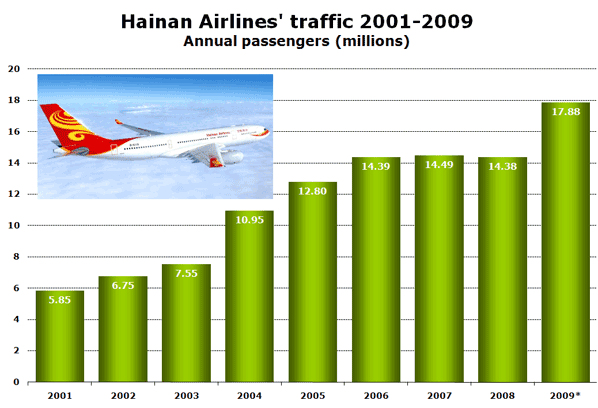 Although the airline was growing fast in the beginning of the last decade, passenger numbers remained stagnant during the latter half, with the exception of when fellow HNA Group airlines China Xinhua Airlines, Chang’an Airlines and Shanxi Airlines were included in its figures in 2009.

In the Chinese domestic market, Hainan Airlines ranks fifth by seat capacity, behind China Southern, China Eastern, Air China and Shenzhen Airlines. Although the airline is not part of a global alliance, it does partner with airberlin, Malév, Brussels Airlines, Rossiya and Vladivostok Air to provide feed to its European and Russian services. In spite of the airline’s origins on the island of Hainan in the south of China, its main base today is Beijing Capital International Airport, from where it offers twice as much seat capacity as from its second largest base in Haikou on Hainan. 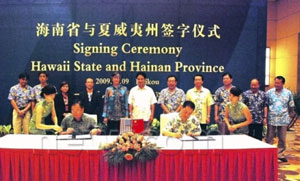 Hainan Airlines plans to soon be the first Chinese carrier to serve Honolulu – a Memorandum of Cooperation was signed in November 2009. "We are excited to be able to finally bridge Hawai¡ to China and to link the two capital cities of Beijing and Honolulu," said Joel Chusid, general manager for North America for Hainan Airlines. "We also expect that some of our travellers will use Hawai¡ as an alternative gateway for travel between China and the United States mainland, which can provide convenience and reduced travel time."

The airline’s route network is heavily focussed on the domestic market. This week, 96% of seat capacity is allocated to intra-China services. The first international service, to South Korea, was launched in 2002, but flights to the country have since been dropped along with services to Japan, Kazakhstan and Malaysia, none of which operated for more than five years.

It only took two years from the first international flight until Hainan Airlines expanded with intercontinental services. In 2004, the airline began serving Budapest, its first destination outside Asia. The airline currently offers 15 international destinations, as shown below. The airline also has orders for a further A330 and eight 787s, which suggest further long-haul expansion plans.

A contributing reason for Dubai’s dominance as the leading international destination is the fact that African services to Luanda and Khartoum operate via the airport. Along with China Southern’s flights from Beijing to Lagos, Hainan Airlines is the only mainland Chinese carrier to serve Africa. Seattle is currently Hainan Airlines’ only North American destination; however, the airline is planning to soon be the first Chinese airline to serve Honolulu. 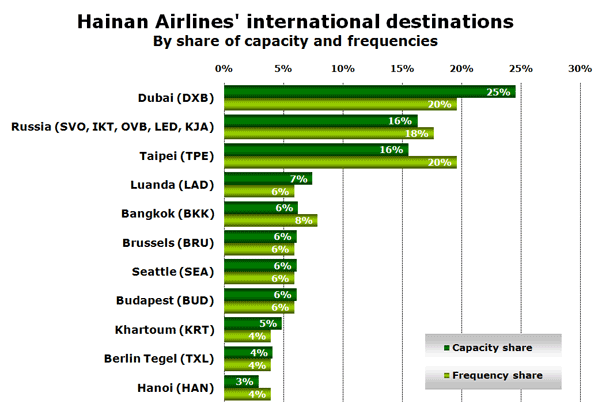 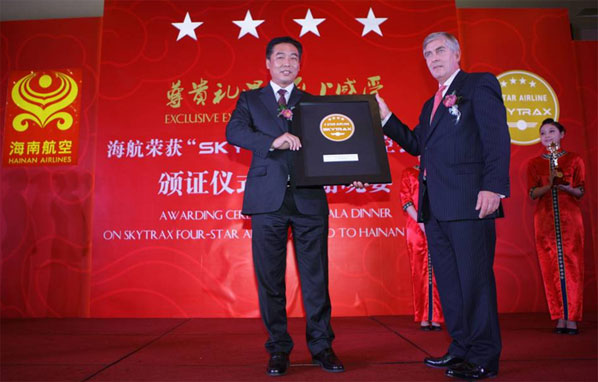 China’s best airline – according to Skytrax’s research: Wang Yingming, President of Hainan Airlines, was given the certificate of the airline’s quality ranking by Skytrax’s CEO Edward Plaisted in December. The international recognition will help the airline, which is not tied to any of the global alliances, in its intercontinental expansion.

So far, all intercontinental flights depart from Hainan Airlines’ primary hub in Beijing. From 28 May, the airline will, however, also serve Brussels three times weekly from Shanghai in addition to its four weekly Beijing services. The airline also recently applied to serve Rome from Shanghai starting this summer, but the application is currently pending approval with the CAAC. Notably, Shanghai Pu Dong is not currently a base for Hainan Airlines, which only operates four domestic routes to and from the airport.