LOT has introduced a special aircraft on the Krakow-Rome route, promoting Krakow and the Malopolska province. The Embraer 170 is decorated with a section of Leonardo da Vinci’s painting ‘Lady with an Ermine’ – da Vinci’s only painting in Poland and a famous symbol of Krakow. The three times weekly Rome service was launched in July 2009.

Poland is by far the biggest (in terms of population) of those countries that have joined the EU since 2004. With around 38 million people it has more citizens than Canada and only 15% fewer than Spain. However, the national flag-carrier Polskie Linie Lotnicze (better known as LOT Polish Airlines or simply LOT) carried just over four million passengers in 2009. Established in 1929 the airline has been a member of the Star Alliance since October 2003, and with its regional subsidiary EuroLOT operates a fleet of 60 aircraft. These include six 767s, 15 737s, 10 Embraer 175s, 10 Embraer 170s and six ERJ 145s. EuroLOT operates eight ATR-72s and six ATR-42s. The airline has ordered several 787s as well as further Embraer E-jets. 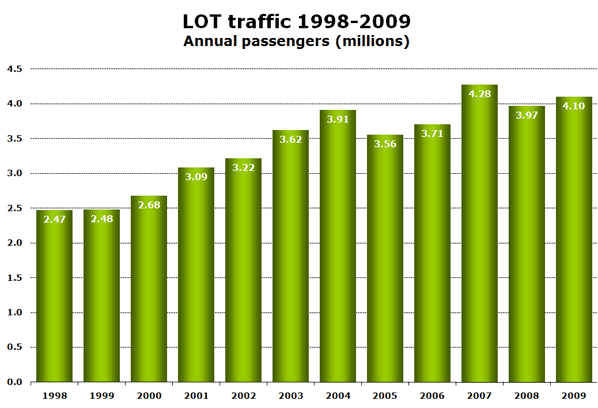 The growth in traffic achieved in 2009 was primarily down to the expansion of summer charter services helping overall traffic to grow by 3.2%, although scheduled traffic (as reported to AEA) was down 8.1%. Scheduled load factor was down marginally from 72.8% in 2008 to 72.5% in 2009. 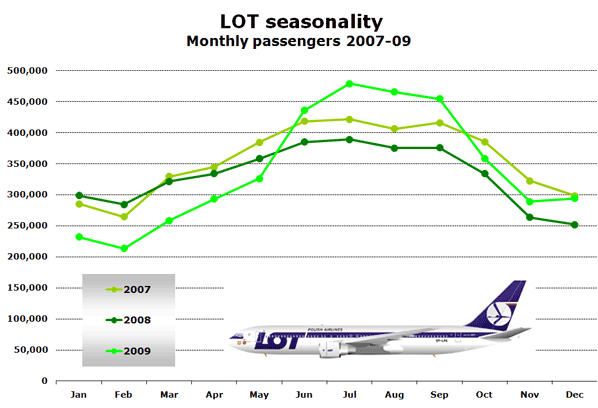 Germany, US and UK are leading country markets

LOT has ordered eight 787s, five of which will be delivered in 2012. “The Boeing 787 is the aircraft of the future. We are proud that our passengers will be among the first in Europe to fly in them,” said Sebastian Mikosz, President of LOT Polish Airlines.

Analysis of schedule data for this summer reveals that LOT operates to 28 countries outside of Poland though only Canada and the USA are long-haul destinations. The leading country markets are Germany, the USA and the United Kingdom. The airline operates 13 routes between Poland and Germany, including five to both Frankfurt and Munich, major hubs for Star Alliance partner Lufthansa. 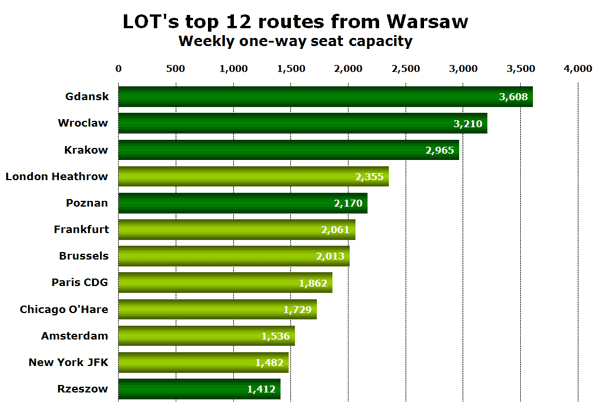 The airline’s busiest routes are all from Warsaw and in terms of seat capacity four of the top five routes are domestic. The busiest international route is to London Heathrow which is served with three daily flights. Two of the airline’s transatlantic routes make the top 12 highlighting the importance of these routes to the airline. 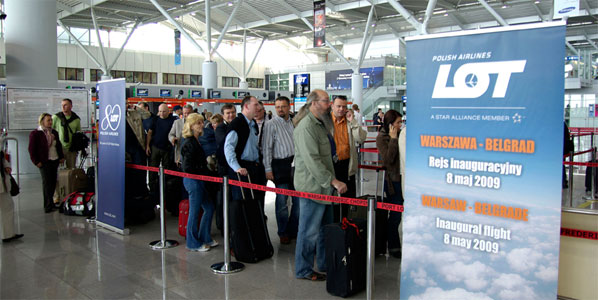 LOT launched Warsaw-Belgrade services in May 2009. The route is operated five times weekly (daily except Thursday and Saturday) with an ERJ145.

In the last two years the airline has dropped several routes from Warsaw. In March 2008 it axed Dublin, Lyon, Oslo and Venice, followed in June 2008 by its twice-weekly service to Beijing. It also dropped Hannover, Stuttgart, Kaliningrad and Tallinn flights that year

LOT operates a limited number of international routes from Poland’s regional airports. These are dominated by links to Frankfurt and Munich.

This summer the airline is launching four new routes (all from Warsaw) starting with the return of daily flights to Tallinn starting on 10 May using the ERJ. A week later Bratislava will start being served once more with six weekly flights using an ATR-42. In June the airline launches three weekly flights to Beirut using an Embraer E175 and in mid-August daily flights will be introduced to Gothenburg using an Embraer E170. Other possible destinations believed to be under consideration by the airline are Almaty, Astana, Baku, Cairo, Kosice and Yerevan.