Route of the Week:
Bahrain Air’s Bahrain to Dhaka and Chittagong Ibrahim Alhamer (centre), managing director of Bahrain Air, piloted the first A320 into Dhaka – and received a mystery gift from the grateful hosts. The Bangladeshi market is important to the airline because of the large guest worker community in Bahrain.

Cake of the Week:
Bulgaria Air/Kur-Club to Varna 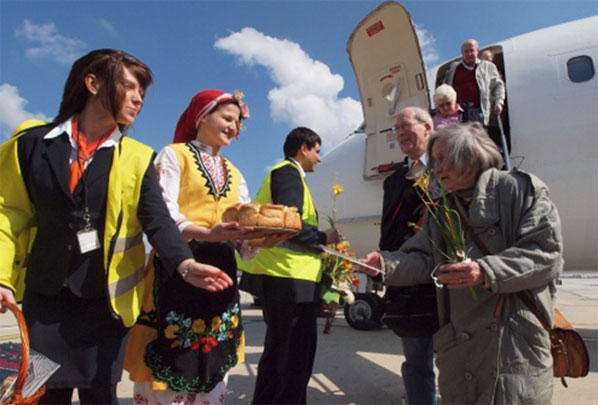 There were no cakes for new scheduled routes this week, but we have just got hold of this great photo from the first summer season flight at Varna airport in Bulgaria. Bulgaria Air and tour operator Kur-Club brought 164 charter tourists from Frankfurt and Düsseldorf to the airport at the Black Sea coast. Although Aer Arann flew straight to Gloucester/Cheltenham from Dublin all four days of the Cheltenham Festival, we presume Michael O’Leary (insert, left) flew Ryanair to Bristol to see his horse Weapons Amnesty (insert, right) win the RSA Chase on the second day of the festival - a St Patrick’s Day to remember. China Eastern takes over the route between Nanjing and Singapore – SIA will be withdrawing from the route a week later. Hainan Airlines third route to Bangkok: The new Hangzhou service was celebrated a week before the launch at the Hangzhou Yunxi Holiday Hotel. Philippine Airlines’ launch of flights from Brisbane was celebrated by a lot of happy people. We have no idea who they are, but they all seem to have a good time – no wonder with such a great new route!