Aer Lingus Regional launches with 12 routes; only three not previously operated by either Aer Arann or Aer Lingus Aer Lingus Regional started operating the Blackpool-Dublin route on 28 March. The new schedule is jointly operated under a franchise agreement between Aer Arann and Aer Lingus and means there are now daily flights between Blackpool and Dublin. 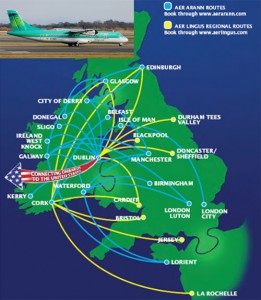 This week saw the launch of Aer Lingus Regional, a new brand name created by Aer Lingus to cover services mostly between the UK and Ireland which will actually be operated by Aer Arann using four of their ATR 72-500s, but painted in Aer Lingus livery. 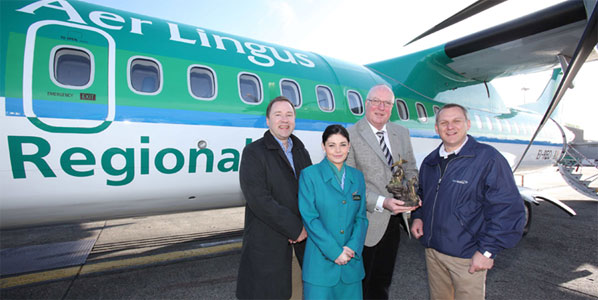 In addition to the re-branded existing routes, the airline has launched three completely new routes. These are from Cork to Glasgow, Dublin to Doncaster/Sheffield, and Dublin to Durham Tees Valley. All of these will be served either five or six times weekly. The Dublin to Doncaster/Sheffield route has previously been operated by Thomsonfly (during the summer of 2005) and also Ryanair (from 28 April 2005 until the end of June 2009). Ryanair also served the Dublin-Durham Tees Valley market for many years until June 2009, and flew between Cork and Glasgow Prestwick between December 2007 and October 2008 when Aer Arann took over the route for a couple of months.

Aer Lingus Regional may operate other new (or existing) routes later in the year, once the success (or otherwise) of this new venture has been established. It will be interesting to see whether shareholder Ryanair chooses to re-enter any of the markets it left or whether it is happy to adopt a wait-and-see policy.