Kingfisher has launched daily flights from New Delhi to London Heathrow – its first international service out of New Delhi. Flights are operated using an A330-200. Dr. Vijay Mallya, Chairman and CEO, Kingfisher Airlines, said: “International traffic demand in and out of India remains robust and the unique ties between Britain and India generate attractive additional opportunities.”

Despite being Europe’s busiest airport and notoriously difficult for new carriers to gain access to due to slot issues, London Heathrow airport has seen a significant number of network changes during the last two years. This week saw the start of new services by bmi British Midland to Berlin and Vienna, China Airlines to Taipei, Kingfisher to Delhi and the resumption of services to Shanghai with China Eastern.

Comparing the start of the latest summer season with that of 2008, the number of weekly seats and the total seat capacity are both down between 2% and 3%. This apparent relative stability disguises the number of network changes which have taken place during this time. These are summarised in the following table.

This does not include services that started since April 2008 and have since been abandoned such as Kingfisher’s service to Bangalore. During the next few months two other new routes are known to be starting; Lufthansa begins serving Dresden on a daily basis using bmi aircraft from 19 April, and on 24 May Virgin Atlantic launches thrice-weekly flights to Accra in Ghana. 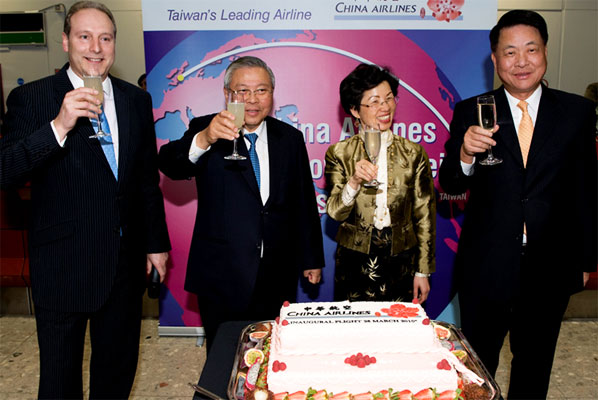 China Airlines yesterday launched Taipei-London Heathrow services – it is the first time that the UK has been connected by a direct service to Taiwan. The three times weekly flights are operated using an A340-300. Pictured at the cake-cutting ceremony are: Chris Butler, operations director for LHR Terminal 4, China Airlines’ Chairman Philip Wei, Madame Chang, and President Hung Hsiung Sun.

While British Airways has maintained the number of flights it operates and increased the number of destinations it serves non-stop from 96 to 104, bmi British Midland has cut its network from 31 to just 20 routes in two years. Its new owner, Lufthansa, on the other hand has increased its presence by over 25% thanks in part to the addition of five daily flights to Milan Malpensa using its Lufthansa Italia subsidiary. 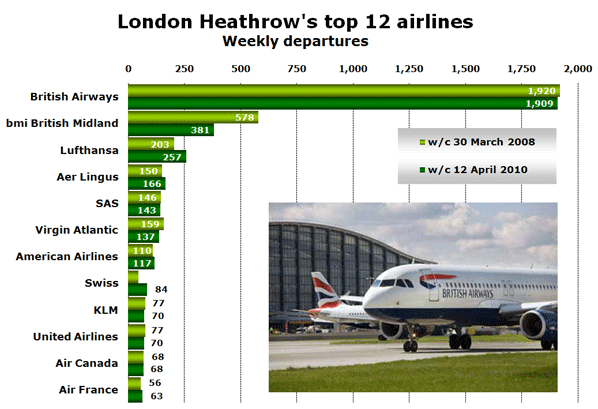 Apart from Lufthansa, Swiss has virtually doubled its presence at the airport thanks to its new six-times daily service to Geneva, complementing its existing six daily flights to Zurich. 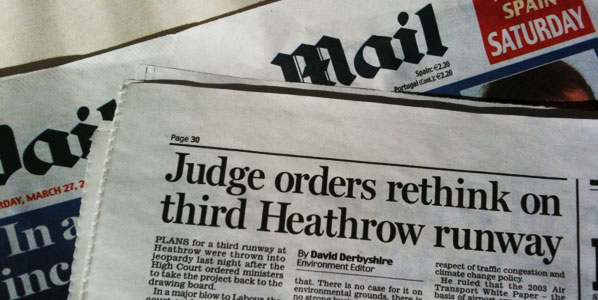 Plans for a third runway at Heathrow were dealt a blow last week when the High Court ordered a fresh inquiry into its impact on traffic congestion and climate change. The Labour government supports the third runway, while opposition parties, including the Conservatives and Liberal Democrats, oppose the plans.

While protesters against the planned third runway at Heathrow celebrated an apparent victory in the UK courts that will require the government to re-justify its case based on more recent data, anna.aero analysis of schedule data confirms that Heathrow is falling further behind its European rivals when it comes to the number of non-stop destinations served. Frankfurt, Paris CDG and Amsterdam all serve many more destinations with non-stop flights. Comparing data for the last five summer seasons shows that Paris has gained routes, Frankfurt has stayed virtually unchanged and Amsterdam is now serving seven fewer destinations non-stop. However, London Heathrow is now serving 15 fewer destinations non-stop than it did in 2006. 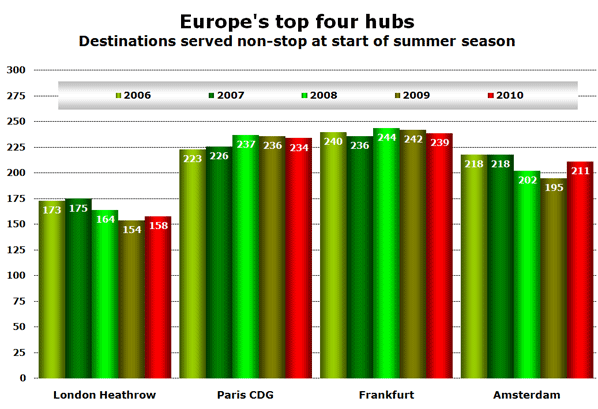 In view of this evidence it would be interesting to know how the Conservative party (which hopes to gain power in an imminent UK general election) can still justify its position that Heathrow does not need a third runway, especially given that an additional runway has been approved for Frankfurt and both Amsterdam and Paris have twice as many runways as Heathrow.