The official start of the summer season means lots of cakes, so we’re giving the readers of anna.aero the chance to choose our Cake of the Week.

Sunday saw the official start of the so-called “summer season” (at least in the Northern hemisphere) as clocks were moved forward by one-hour in Europe, North America and other parts of the world. The aviation industry celebrated with the introduction of over 150 new routes – our new routes feature takes a detailed look at many of these new services. Analysis of the countries involved in the new routes (started any time during the week 23-29 March) shows that 10 of the top 12 countries are in Europe, with Australia (fifth) and the USA (eighth) being the odd ones out. 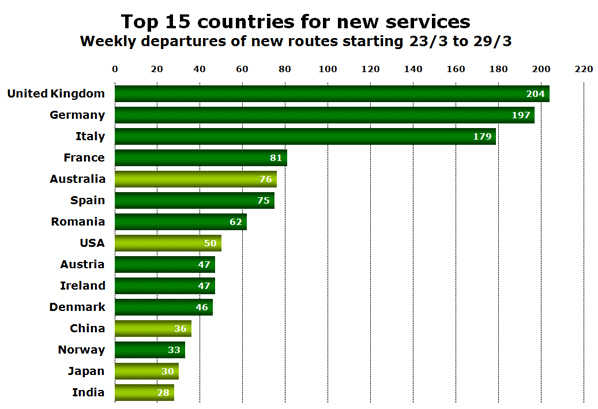 Airports in the UK, Germany and Italy each have twice as many new weekly services starting as any other country. Australia owes its prominent position primarily to Tiger Airways which launched three new domestic routes from its latest base in Brisbane. Air Canada launched its new Calgary-Tokyo service to the beat of Japanese drums. The only direct link between Alberta and Asia, the service is operated three times weekly using 767-300 aircraft. Air Canada has invested significantly in the Calgary market over the past year, strategically responding to strong demand.

The last week has seen the introduction of two new Ryanair bases. The first, which generated 14 new routes, was at Leeds/Bradford in the UK, while the second was at Faro in Portugal (although many of the new Faro routes have yet to start). In total Ryanair started 27 new routes during the last week with an average weekly frequency of just 3.3. Other European LCCs to start new routes this week included Blue Air, bmibaby, easyJet, germanwings, niki, Norwegian, Transavia.com, Vueling and Wizz Air. 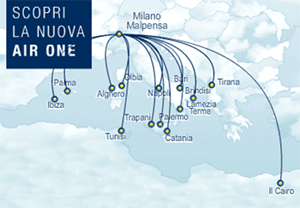 Aer Lingus and Alitalia get creative with partners

In a curious move Alitalia handed over several of its Milan Malpensa routes to Air One. According to Air One’s website (which is part of Alitalia.com) the airline now operates primarily domestic routes from Milan Malpensa, plus international services to Cairo, Ibiza, Palma, Tirana and Tunis. Meanwhile Aer Lingus and Aer Arann have formed an alliance to create Aer Lingus Regional which operates many former Aer Arann routes using Aer Arann ATR 72s painted in Aer Lingus livery and sold on the Aer Lingus’ website. Only three of the 12 routes the airline operates are actually new.

New transatlantic services were initiated by Continental between Newark and Munich (a base for its Star Alliance partner Lufthansa), and by United between Chicago O’Hare and Brussels, and between Washington Dulles and Madrid. The latter route is of particular interest as the flights are actually operated by United’s “partner” Aer Lingus, using one of its A330s.

London Heathrow had a busy weekend with the introduction of the new Kingfisher service to Delhi, China Airlines flights to Taipei and the resumption of China Eastern services to Shanghai. bmi added a new twice-daily London to Vienna service and also ‘began’ four times daily flights to Berlin. However, this is not really a new route as bmi was already operating the service on behalf of Lufthansa, which continues to codeshare on the route. Still no sign of any new domestic routes for Heathrow though.

Apart from the Alitalia/Air One handover at Malpensa, there were some proper new routes at Milan’s main airport from airberlin (to Germany), Air Dolomiti (to Germany), Bulgaria Air (to Bulgaria), Cathay Pacific (to Hong Kong), easyJet (to Greece), Lufthansa Italia (within Italy and to Poland and Sweden) and Norwegian (to Norway). Vienna benefited from bmi’s new Heathrow service as well as Alitalia’s resumption of flights to Rome and three new routes from niki to Barcelona, Copenhagen and Nice. Honourable mention should also be made of Copenhagen and Munich airports, which both welcomed new routes from four different carriers.

For full details of all the new routes we managed to identify starting this week take a look at our free, downloadable, sortable spreadsheet.