Ryanair has opened its 34th base at Leeds Bradford with the launch of 14 new routes. It now operates 17 routes from the airport, with two based aircraft. Tony Hallwood, LBIA commercial director, said: “Ryanair is supporting LBIA’s important role as Yorkshire’s international gateway airport and securing over 1,000 new jobs in the region.” Hallwood is pictured with Gary Verity, chief executive of Welcome to Yorkshire, and Ryanair’s Dara Brady, and also with Ryanair’s calendar girls.

Last week saw the opening of another UK base for Ryanair at Leeds/Bradford International Airport (LBIA) in Yorkshire. The airport ranks 17th in the UK based on passenger numbers in 2009 when it handled just over 2.5 million customers, down 11% on the previous year. Ryanair began serving the airport from Dublin in May 1996 but did not add any further routes until a short-lived Shannon service began in November 2007. Alicante and Barcelona Girona flights began in October 2008. Now the airline is basing two aircraft at the airport and is adding 14 new routes, though not all of them are new routes for the airport. 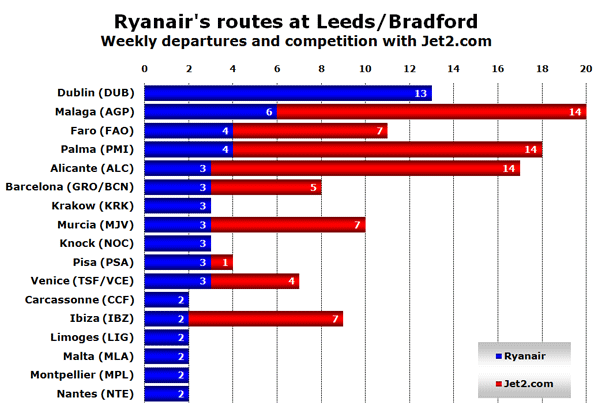 Ryanair’s new services to Faro, Ibiza, Malaga, Murcia, Palma and Pisa will compete head-to-head with existing services provided by Leeds/Bradford based low-cost carrier Jet2.com. It will also compete indirectly on the Venice route where Ryanair serves Treviso airport while Jet2.com operates to Venice Marco Polo. Apart from the Pisa route Jet2.com will operate more weekly flights than Ryanair on the routes where they compete this summer. Tony Hallwood, commercial director of LBIA, told anna.aero: “The strength of our catchment area shows great potential for Ryanair and, in fact, all airlines. There is sufficient demand for both Ryanair and Jet2.com to fly on certain routes. They will be complementary services and will stimulate the Yorkshire market. Over the next 12 months the Ryanair services will generate one million passengers with two based aircraft. 1,000 local jobs will be sustained in the region, with increasing inbound business and tourist traffic.”

Anna.aero estimates that two based aircraft should generate around 650,000 passengers per annum but some of these may have been lured away from Jet2.com’s flights. The Alicante, Dublin and Girona routes are currently operated by aircraft based at those airports. In 2009 the Dublin route generated 187,000 passengers (down from 232,000 in 2008) while the Barcelona Girona service welcomed 54,000 passengers.

Ski routes and the Canary Islands in winter?

Many of Ryanair’s new routes are classic ‘summer-only’ destinations. It is not yet clear which routes will be served year round and which additional destinations may be operated during the winter season. A number of specialist ski destinations such as Grenoble, Salzburg and Turin may be considered as well as longer-haul flights to winter sun destinations in the Canary Islands.