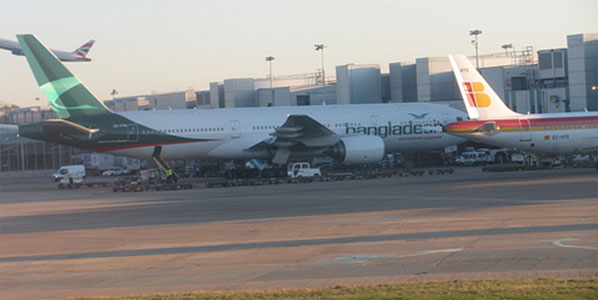 The new branding (airline): Although the prime minister unveiled Biman Bangladesh’s new livery on only February 3, another cabinet decision has already scrapped the incoming corporate image because it is felt it does not represent Bangladesh nationhood clearly enough, opting instead to revert to the original "Balaka" crane. This is despite the fact that the first 777 has already been delivered in the new paint. The good news is that the modernisation represented by the 777-200ER will allow the airline to fly non-stop from Dhaka to London Heathrow, replacing the previous one-stop service (via Dubai) operated with A310s. 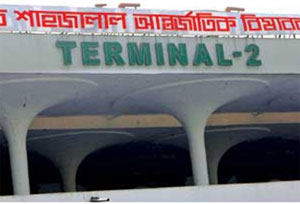 The new branding (airport): In February, the main airport in Dhaka was re-named Shahjalal International after the popular Muslim saint entombed in the Bangladeshi city of Sylhet. The change, made at cabinet level, has not been without controversy – it was previously named Zia International after Bangladesh’s late founding president whose party is now in opposition.

The air transport industry in Bangladesh has already had a busy start to 2010. In the first quarter of the year the country’s main airport in Dhaka has been re-named from Zia International Airport to Shahjalal International Airport and the country’s national airline, Biman Bangladesh had revealed a new corporate identity which was just appearing on its aircraft…until it was scrapped last week. The airline has also received its first 777 and two 737-800s since the start of the year.

The country, which was East Pakistan between 1947 and its own independence in 1971, has the world’s seventh biggest population (estimated to be over 160 million) despite being about 10% smaller than the state of California. According to OAG schedule data the country currently has five airports with scheduled services. Of these Dhaka is by far the largest with around five million annual passengers followed by Chittagong. The remaining three airports at Cox’s Bazar, Jessore and Sylhet offer only domestic flights. 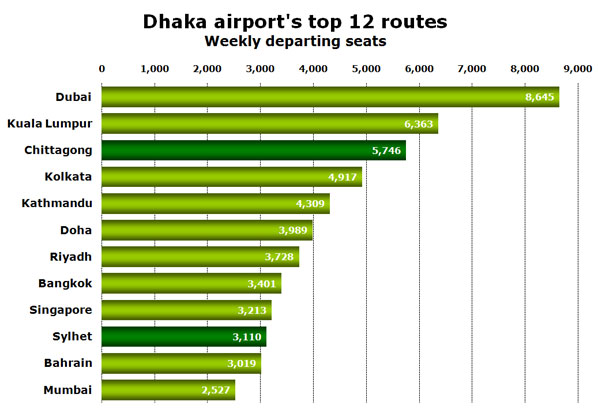 All of the top 10 routes are served by at least two carriers with the Kolkata market particularly competitive as all three Bangladeshi carriers are joined by Air India Express, Jet Airways and Kingfisher. Low-cost airlines have a presence at the airport as AirAsia is one of five airlines serving Kuala Lumpur and Air Arabia operates a daily flight to Sharjah. Other carriers operating at the airport include Afriqiyah (to Tripoli), China Eastern (to Kunming), China Southern (to Guangzhou), Druk Air (to Bhutan), Etihad (to Abu Dhabi), Gulf Air (to Bahrain), Malaysia Airlines (to Kuala Lumpur), PIA (to Karachi), Qatar Airways (to Doha), Saudi Arabian (to Dammam, Jeddah and Riyadh), Singapore Airlines (to Singapore) and Thai Airways (to Bangkok).

No European carriers (not even British Airways) currently operate flights to Bangladesh. A total of 27 destinations are currently served non-stop from Dhaka. November 2009: United Airways began twice weekly Dhaka-London Gatwick services using MD83s (via Dubai and Istanbul Sabiha Gökçen). A 767-300ER will take over the route in April 2011 making it a one stop (via Dubai) service.

National carrier Biman Bangladesh has just begun a major fleet upgrade. Its ageing Fokker F28s (three), DC10s (five) and A310s (three) are gradually being phased out in favour of new Boeing aircraft, starting with a 777 and two 737-800s which joined the fleet earlier this year. The airline is one of many to have ordered the 787 though deliveries are not expected until 2016 at the earliest.

GMG Airlines, which has been operating since 1998, is the largest independent carrier in Bangladesh and operates a mixed fleet comprising a single 767 (only recently acquired), three MD80s and three Bombardier Dash8s. The latter are used on the airline’s domestic routes and to Kolkata. Apart from domestic flights GMG also operates to Abu Dhabi, Bangkok, Delhi, Dubai, Karachi, Kathmandu and Kuala Lumpur.

United Airways is the third Bangladeshi airline of note. It started flying in June 2007 and currently operates four MD83s and two 37-seat Dash 8-100s. The MD83 is used on international routes to Dubai, Kathmandu and Kuala Lumpur. Last year, the airline began twice-weekly flights to London Gatwick via Dubai and Istanbul Sabiha Gökçen.

Bangladesh (along with India and Sri Lanka) will jointly host the next ICC World Cup of cricket in 2011. The England team recently toured the country and won both of the Test matches played in Chittagong and Mirpur (near Dhaka).