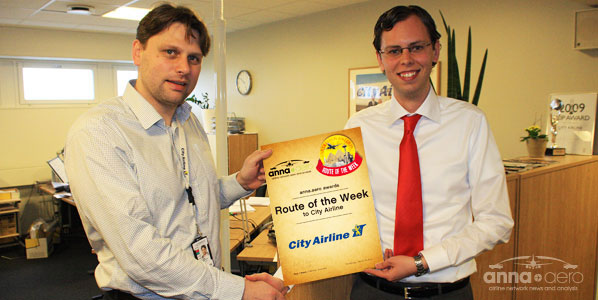 Having been a local, Gothenburg-based regional carrier since 2001, City Airline – last analysed in July 2009 – is currently undergoing major change. The airline has expanded its fleet of two 37-seat ERJ135s and three 49-seat ERJ145s by adding two ex-SAS MD87s with capacity for 125 passengers, with a further MD87 and two ERJ145s on their way. Much like the opinion of Allegiant Air, the other loyal buyer of ex-SAS MD80s, City Airline’s CEO Jimmie Bergqvist also told anna.aero how happy he is with the excellent state of the aircraft and how this equipment will help City Airline launch yet more routes. 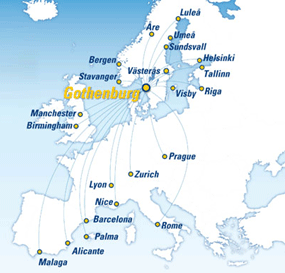 Primarily, the new aircraft will be used to fill the leisure gap in the market at Göteborg Landvetter Airport, which was left after the bankruptcy of Sterling in October 2008 (and previously both Goodjet and FlyMe). City Airline has considered this type of move since 2007, when FlyMe departed from the market, and did launch flights to Nice in March last year. With its Embraer aircraft being too small and feeling that previous failed 737/A320 attempts suggest such aircraft are too large for the market, City Airline has settled for 125-seat MD87s. The airline’s new fleet composition will also allow it to better manage capacity through the seasons in the whole route network.

Although in the initial plans, the idea to serve Athens and Milan was abandoned due to insufficient demand. Bergqvist now refers to the current expansion stages as an ‘evaluation phase’, although he expresses pleasure with both the outcome and prospects of the routes now going ahead. The first flights to the Mediterranean ‘leisure’ destinations Malaga, Alicante, Palma, Rome and Barcelona have all had load factors of close to 100%, and all but one passenger in the inaugural week have been real revenue passengers. 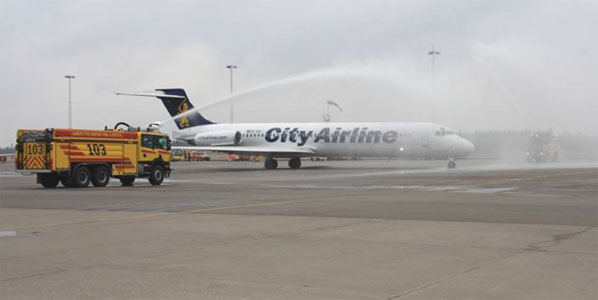 Göteborg Landvetter Airport’s fire brigade saw off the first flight to Barcelona with one of the newly delivered MD87s, concluding City Airline’s launch of Mediterranean leisure routes. The airline is, however, to expand further regionally, feeding passengers through its ‘mini hub’.

The next moves in City Airline’s expansion are the launch of further regional routes to Riga, Bergen and Stavanger, an increase of frequencies on the routes to Birmingham and Zurich as well as the establishment of domestic feeder services to the airline’s mini-hub in Gothenburg.

Except for the airline’s northern Swedish routes, Västerås has so far been the only such route to be announced with a start date (later this month). A further six domestic destinations (Karlstad, Örebro, Växjö, Norrköping, Borlänge and Malmö) as well as Oslo are to be launched by next autumn. As a privately owned carrier, City Airline is setting up joint ventures with local businesses and individuals around the regional airports to share the investment needs of the expansion. These short-distance domestic routes are expected to almost exclusively generate transfer passengers, with very limited point-to-point traffic. 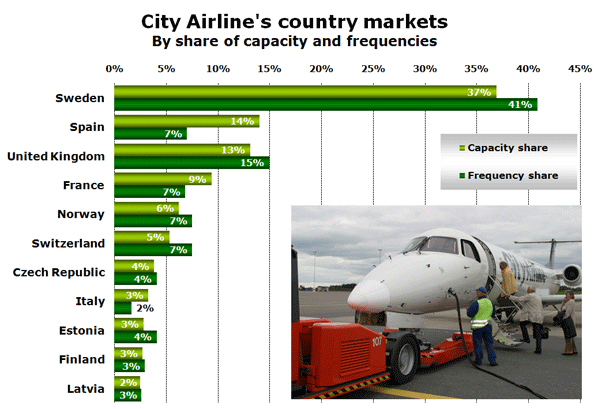 The airline’s new routes to Spain instantly puts the country market right below the dominant Swedish domestic market, which is to grow even more important as the additional domestic routes are firmed and made available to book. With the increase of frequencies to Birmingham, the UK ranks second among City Airline’s international country markets.