Airports in the Nordic region have gradually started reporting year-on-year traffic growth once more. For much of 2009 only Stockholm Skavsta amongst our basket of 12 Nordic airports reported consistent growth. However, in November seven of the 12 were reporting an increase in passenger numbers while in December it was only Helsinki and Stockholm Arlanda that were still reporting traffic declines. In February of this year the two Danish airports in our analysis were both reporting double-digit year-on-year growth. 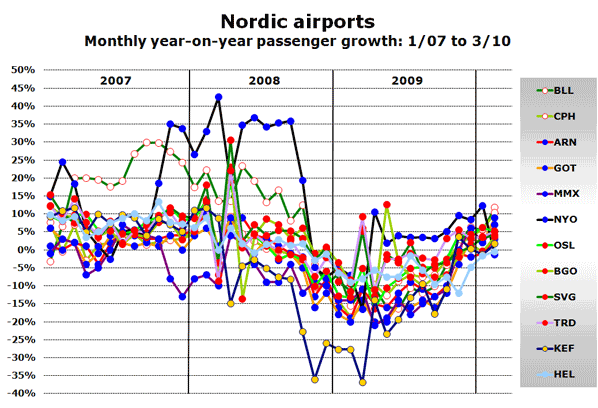 The dramatic impact of the banking crisis in Iceland saw traffic at Keflavik Airport fall by almost 25% between 2007 and 2009. However, traffic at the airport has once again stabilised and during the last four months passenger numbers were up in three of them. Iceland Express plans to launch services to the US in June when it will begin serving Newark with a 757. Flights to Winnipeg are also scheduled to operate between the beginning of June and the end of August.

Other new services planned for this summer to Iceland’s busiest airport include airberlin to Berlin Tegel, Düsseldorf, and Munich; Icelandair to Brussels and Trondheim; Iceland Express to Birmingham, Milan Bergamo and Oslo; niki to Vienna and Transavia.com to Paris Orly.