Ryanair starts over 50 new routes in one week; now serves 142 airports across Europe and North Africa

Honestly – at the risk of indigestion we promise not to serve cakes at every visit – but this week’s launches – phase 2 of the start of the summer season – have resulted in another bumper harvest and we need your help choosing the winner again (thank-you). Next week it’s back to the anna.aero secret judging panel. Vote for your favourite here.

During the last week another 100 new routes have been started by the world’s airlines as the summer season well and truly gets under way with the added bonus (for some airlines) of Easter falling very early in April this year. For a detailed review of all this week’s new routes see our weekly new routes round-up complete with the usual selection of impressive celebrations.

However, unlike last week when the 150 new routes were spread across many airlines, this week over half of all new routes were started by just a single airline, Ryanair. In the last two weeks the airline has established new bases at Leeds/Bradford (in the United Kingdom), Faro (in Portugal) and Oslo Rygge (in Norway). As a result, according to OAG schedule data Ryanair is currently operating 824 routes across 142 airports in Europe and North Africa. This does not include all the summer seasonal routes which have yet to start operating. The average frequency across the current route network is 5.1 departures per week. 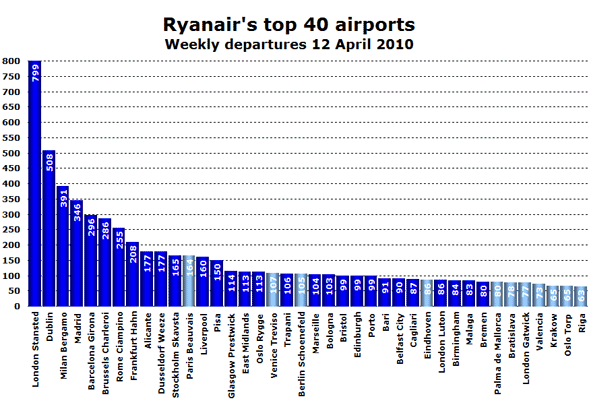 As is well known the airline’s two busiest airports are London Stansted and its ancestral home at Dublin airport. However, the ranking of airports after that may be less predictable with Milan Bergamo ranked third and Madrid (yes, one of Europe’s busiest major airports) ranked fourth ahead Girona (serving Barcelona) and Brussels Charleroi. Among the top 20 airports are three non-bases; Paris Beauvais (12th), Venice Treviso (18th) and Berlin Schönefeld (20th). The airline’s new bases at Faro and Leeds/Bradford rank 41st and 42nd, but the new base at Oslo Rygge has jumped to joint 16th place with 113 weekly departures spread across 26 destinations.

This week saw Ryanair’s first flights to Lleida airport in Spain with twice-weekly services to both Frankfurt Hahn and Milan Bergamo. There are seven airports (of which five are in France) which Ryanair aircraft visit just twice per week. These are Constanta (Romania), Figari (France), Lappeenranta (Finland), Lourdes/Tarbes (France), Perpignan (France), Rodez (France) and Saint Etienne (France).

Among the airlines also starting at least a couple of new routes during the last week were airBaltic, Cimber Sterling, City Airline, easyJet, Lufthansa, Norwegian and Wizz Air. There were also new route launches for European LCCs such as Blue Air, Germanwings, Jet2.com and Transavia.com France.

There were relatively few new longer-haul routes starting this week, though Qatar Airways launched significant new services from Doha to both Ankara and Copenhagen, while Jetstar resumed services after a one-year hiatus between Cairns and Osaka Kansai.

Most US carriers seem to have decided to wait until after Easter before launching any new domestic routes, though Midwest which started two new routes from Milwaukee this week was a notable exception. Canadian niche carrier Porter Airlines also started a new daily service from its home base at Toronto City Airport to Sudbury. 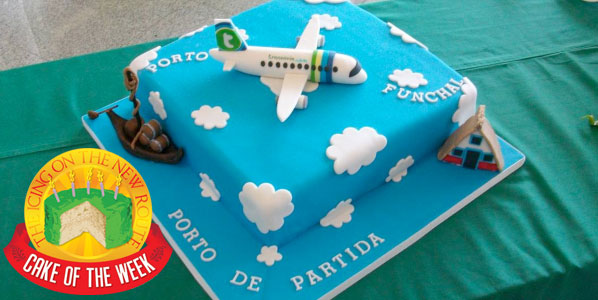 Correction/Amplification: This is not a Madeira cake! Last week 804 readers voted in our poll and this magnificent cake, celebrating the start of Transavia.com’s Porto to Funchal services, grabbed a huge 33%. However, we erroneously credited Cake of the Week to Madeira Islands Airports, whereas in fact it was a creation of Porto – sorry!!! It’s still the same winning cake, we’re pretty confident that we get most other things right, but we’re delighted to put the record straight.