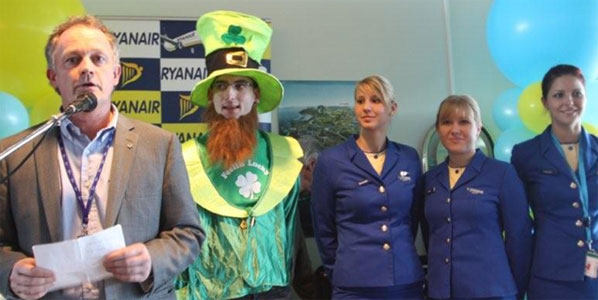 Oslo Rygge CEO Pål Tandberg expresses his delight at the launch of last week’s new Ryanair base and a further 18 new routes. The leprechaun is in fact Ryanair’s sales and marketing executive for the Nordic countries, Erik Elmsäter. 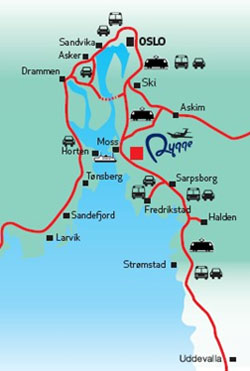 Moss Airport Rygge, located around 60 kilometres from downtown Oslo, was purely a military airfield until 2007 when plans were announced to enable commercial operations. Local low-cost carrier Norwegian started the first scheduled flights at the airport on Valentine’s Day 2008. Until the end of last year it remained the only carrier to offer scheduled services. Ryanair then started serving Rygge at the beginning of October when flights from Bremen, Brussels Charleroi, London Stansted and Madrid began. Four further destinations started before the end of 2009.

Last week the airport became a designated base for Ryanair as it launched a further 18 new routes with two more new routes starting in May. However, in true Ryanair style, underperforming routes to Bremen and Milan Bergamo which started last year appear to have already been axed. As a result the airline currently has 26 destinations on sale from the airport. 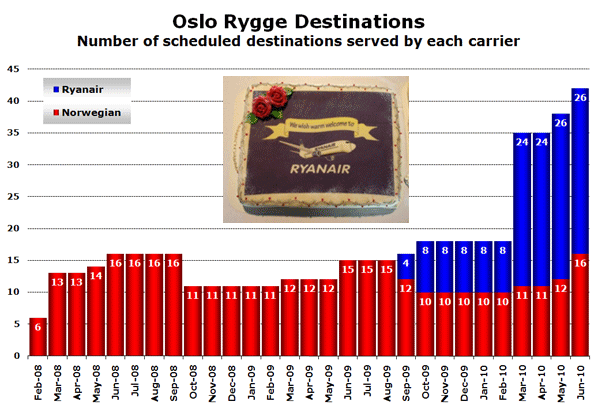 Simple but smart - the new low cost terminal shares a military airfield. Norwegian starts this summer season with 11 routes having operated to some 26 different destinations since being the first airline to arrive just over two years ago.

Norwegian has operated scheduled flights from Rygge to some 26 destinations since it began serving the airport just over two years ago. Some destinations are seasonal, others have been dropped while some have been moved to Norwegian’s main base at Oslo Gardermoen. At the start of the summer season the airline is operating 11 routes including five domestic routes to Bergen, Bodø, Stavanger, Tromsø and Trondheim. Other year-round services are to Alicante, Antalya, Athens, Budapest, Malaga and Prague. Seasonal services to Pristina and Sarajevo return at the end of June while there are new seasonal flights this year to Dalaman (May), Chania (June) and Thessaloniki (June).

Destinations that have been served from Rygge by Norwegian are Barcelona, Belgrade, Berlin Schönefeld, Istanbul, Krakow, London Stansted, Palanga, Szczecin, Valencia and Warsaw. Four of these airports are now served by Ryanair (Berlin, Krakow, London and Valencia).

Ryanair’s network from Rygge includes no domestic routes but does include five cities that are served with daily flights. London (Stansted) and Stockholm (Skavsta) are even served twice daily.

Only on Alicante and Malaga does Ryanair go head-to-head with Norwegian. As a result of this major increase in capacity Rygge’s passenger numbers are likely to jump to around 1.5 million passengers per annum in 2010.