British Airways offers just 140 out of 349 destinations from London; has monopoly on just 18; more strikes would benefit easyJet most 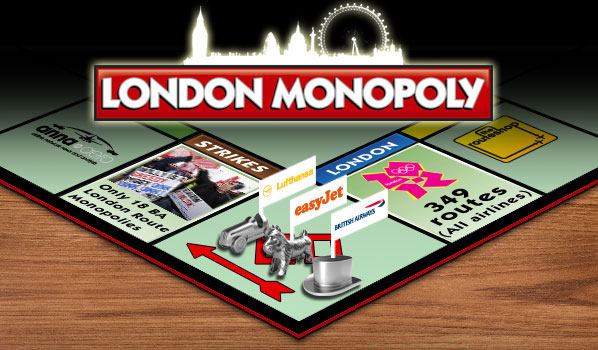 No monopoly: British Airways faces direct or indirect competition on the vast majority of its London routes. easyJet looks set to benefit most from the BA strikes (in terms of offering the most alternative capacity from the London airports) followed by Virgin Atlantic, Lufthansa and then Ryanair.

The recent strikes by British Airways’ (BA) cabin crew made anna.aero curious about a number of aspects of the airline’s network. Just how London-centric is it? On which destinations does it have a monopoly from the UK, and which airlines stand to gain most from any further industrial action?

BA’s UK operations outside of London are surprisingly limited suggesting that a re-branding as “Air London” might not be inappropriate. The focus on London stems from the decisions to merge its UK regional operations into “British Airways Connect”, followed by the sale of this loss-making subsidiary to Flybe two years ago (with whom BA now instead codeshares on several international routes). Even in BA’s best times, these activities had never made money, in contrast to its low cost competitors which only offer short haul, and in essence had always been limited to providing feed to BA’s London hubs.

The resulting rationalisation means that today, from Edinburgh, Glasgow and Manchester, BA operates just three routes at each airport, all of them to London, with the exception of a twice-daily Manchester to Billund service, which is operated by its Danish franchise partner Sun-Air. British Airways no longer has any presence at Belfast, Birmingham, Bristol or Cardiff and operates just a single route each from Aberdeen and Newcastle (both to London Heathrow). However, the high frequency of the primarily Heathrow hub-feeding flights from Edinburgh, Glasgow and Manchester means that these three airports still rank fourth, fifth and seventh in BA’s network. 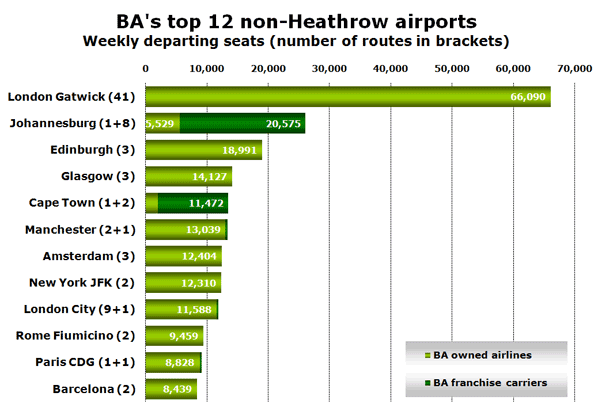 The high ranking of Johannesburg (third) and Cape Town (sixth) is a slight anomaly resulting from the domestic operations in South Africa of BA’s local franchise partner Comair. Outside of the UK (and South Africa), BA’s biggest operational bases are Amsterdam, New York JFK, Rome Fiumicino, Paris CDG and Barcelona. In terms of destinations served non-stop, London City now ranks third (with 10) behind Gatwick (41) and Heathrow (104).

By combining schedules across all five major London airports (Gatwick, Heathrow, London City, Luton and Stansted), a stunning total of 349 destinations are served non-stop by a vast array of scheduled airlines. Yet BA’s network coverage from London is just 140 destinations – and over half of the routes it has a ‘monopoly’ on from Heathrow are in fact served by other carriers from other London airports, leaving just 12 destinations (from Heathrow) and a further six from Gatwick, not served non-stop by any other airline. These 18 routes are:

However, during the peak summer season, Dubrovnik is also served by easyJet, while Thomson Airways then serves Dubrovnik, Catania and Verona.

Since BA experiences direct or indirect competition on the vast majority of its London routes, which airlines could potentially take greatest advantage of any future BA strikes? Treating the five London airports as a single airport system reveals that easyJet, Virgin Atlantic, Lufthansa and Ryanair offer the most seat capacity from London on routes served by British Airways. 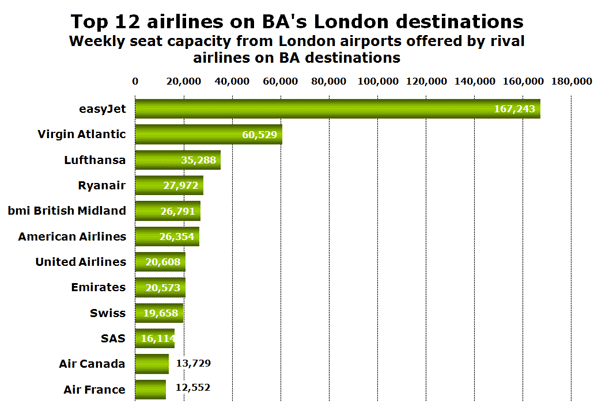 easyJet’s position will come as little surprise as it is now the leading airline at London Gatwick and serves a still-growing number of destinations from the airport, as well as having bases at Luton and Stansted. However, the prominent ranking of Ryanair may surprise given the airline’s reputation for serving remote, secondary airports. However, it also flies non-stop from London to the likes of Bari, Bologna, Faro, Madrid, Malaga, Marseille and Pisa, all of which are also served by BA from London.