Copa Airlines grows 150% in five years; US market leads; where will all the new planes go? 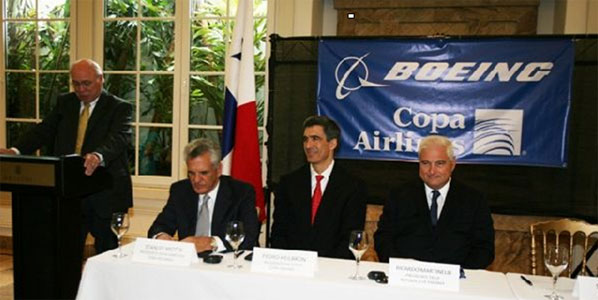 Copa Airlines’ CEO, Pedro Heilbron (sitting upright, centre), and Panamanian President Ricardo Martinelli (right) at the announcement last July for $1bn worth of 737-800s. The big Copa order book and young age of its B737/E190s aircraft will see the fleet nearly double the size to around 80 units by 2017 with no prospect of retirements. Surely, some new routes must be planned!! 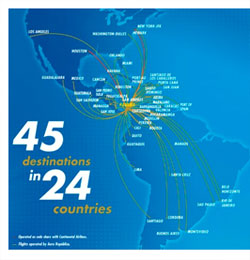 Copa Airlines, the publicly traded, yet de facto national carrier of Panama, makes use of Panama’s central location in its strategy to connect passengers between North, Central and South America and the Caribbean, making the airline’s hub-and-spoke network much larger than otherwise would have been justified by the country’s 3.4 million people.

Since anna.aero last analysed the airline in July 2008, it has been left in a peculiar situation after its US partner airline Continental Airlines switched alliances in October last year. Since 1998, the airlines have had a close cooperation, which includes sharing a frequent flyer programme. Although Continental no longer has any ownership in Copa, the partnership made Copa leave SkyTeam with Continental and it is now an independent airline, although like Continental it too is considering joining Star Alliance. 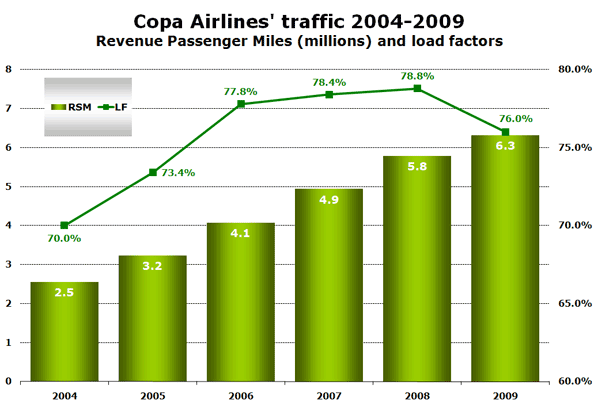 Although Copa Airlines only releases passenger numbers for its group operations, which include its Colombian subsidiary AeroRepública, the Panamanian airline’s growth in Revenue Passenger Miles (RPM) over the last five years has been consistent and reached a staggering 148% between 2004 and 2009. Copa’s load factors have also steadily increased, with the exception of last year, which saw a fall of 2.8 percentage points. In line with these indicators at the same time, the airline’s number of routes has increased from 24 in 2004 to 44 in 2009.

Copa operates no domestic flights and has not done so since 1979. 44% of Copa’s seat capacity is on routes to South America, while North America and the Caribbean each have 21% and 20% respectively. Central American countries are served with 15% of capacity. 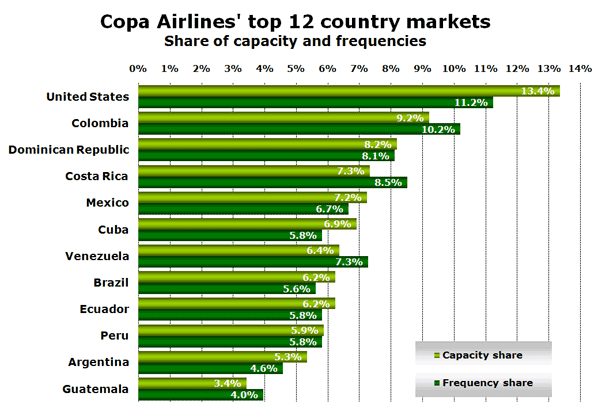 Flights to the United States lead both the airline’s capacity and frequencies. 20 flights a week serve Miami (MIA), while Orlando (MCO) has two daily frequencies, followed by daily flights to both New York (JFK) and Los Angeles (LAX) as well as six times weekly to Washington Dulles (IAD).

Copa Airlines’ second largest country market is Colombia, where the airline’s subsidiary AeroRepública is located. The Colombian airline provides yet further capacity between the two countries, which, if added to that of Copa Airlines, would make the Colombian market surpass the United States. 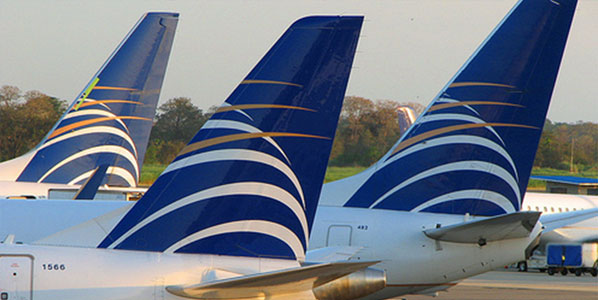 Conservative in route expansion: no new routes have been announced and no new routes were launched in 2009, although investor relations materials hint at Caribbean expansion.

The airline has lately been conservative in its route expansion. Although it increased capacity for 2010 by 5% over the previous year, no new routes have been announced and no new routes were launched in 2009. However, the airline does state in investor relations materials that it is aware of underserved markets with potential, particularly in the Caribbean and Central America. 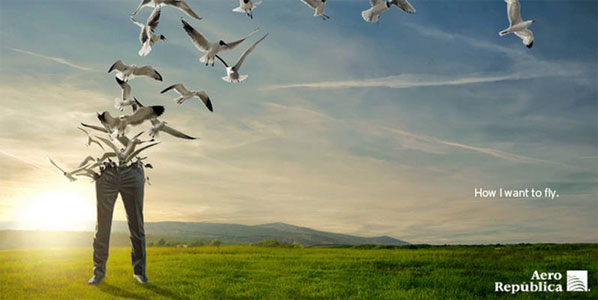 Copa owns AeroRepública in next door Colombia, which is currently running this “How I want to fly" campaign. We particularly liked this Hitchcock-eque one from the series. Indeed, anyone who does not buy this organisation’s fine products certainly deserves to have his torso pecked to bits by seagulls while crossing a field. We totally get it.