Wataniya Airways off to Rome and Vienna 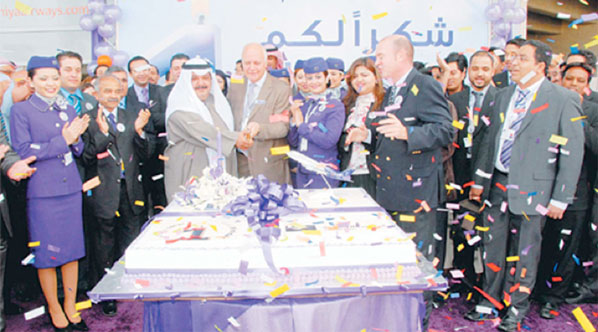 Wataniya Airways – the Kuwaiti airline that celebrated its first anniversary in January – has this week announced Rome and Vienna as its next two European destinations. Abdul Salam Al Bahar, Wataniya Airways’ Chairman and George Cooper, the airline’s CEO, were joined by staff members and the media to celebrate the 12 month milestone earlier this year.

Kuwait-based Wataniya Airways has selected Rome and Vienna as its next two European destinations. Both will be served three times weekly from Kuwait City from 31 May and 2 June respectively. Abdulsalam Al Bahar, Chairman and Managing Director of Wataniya Airways said: “We have chosen Rome to be our second European destination and we are delighted to provide our guests with a new travel option allowing them to live the Wataniya Airways experience when they travel to one of the most attractive and most popular cities in the world. Kuwaitis have always had a distinctive high taste when they travel, and with what Rome has to offer with its history and rich Italian culture, we’re confident it will be an excellent choice for their travel this summer season and we look forward to welcoming our guests on board Wataniya’s class leading fleet.” Regarding the new Vienna route he added: “We are delighted to start services to Vienna, our third major destination in Europe, and we expect it to become a key part of our global flight programme. This new service will enhance the already strong established links between Kuwait and Austria and help the expanding commercial relationship that Kuwaitis and Austrians share.” Kuwait Airways currently operates four weekly flights to Rome but no other carrier currently flies non-stop between Vienna and Kuwait City. The airline’s fleet currently consists of five A320s which will increase to six in June.

Continental has announced that it plans to end services between its Newark base and Bristol in the UK from 7 November. The route which has been operating since May 2005 will have carried almost half a million passengers by the time it ceases later in the year after five and a half years. For the last four years, annual passenger numbers have fluctuated between 83,000 (in 2009) and 93,000 (in 2007). Outside of London and Manchester, the only other scheduled services from UK airports to the USA this summer are with US Airways from Glasgow to Philadelphia, and with Continental from Newark to Belfast (99,794 passengers in 2009), Birmingham (100,254), Edinburgh (152,656) and Glasgow (108,480). 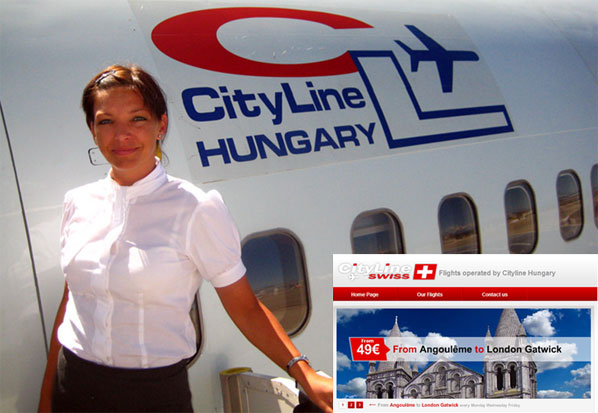 CityLine Swiss has announced that it will launch services between London Gatwick and Angoulême from 2 June, following the decision by Ryanair to drop its London Stansted-Angoulême route. The new service will be operated thrice-weekly using a 150-seat MD83 operated by CityLine Hungary.

Following the decision by Ryanair not to continue with seasonal services between London Stansted and Angoulême, passengers will still be able to travel between London and the Poitou-Charente region thanks to the launch of CityLine Swiss services starting on 2 June to London Gatwick. Flights will be operated every Monday, Wednesday and Friday using a 150-seat MD83 operated by CityLine Hungary. The airline also plans to serve Lyon and Marseille three times weekly from Angoulême. Ryanair started serving the airport from London in 2008 and carried 24,792 passengers that year. Last year traffic increased by 12% to 27,757 passengers. 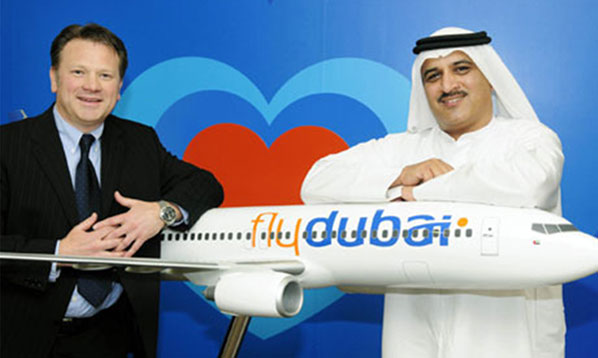 flydubai is to serve Assiut in Egypt and Istanbul’s Sabiha Gökçen as part of its continued expansion. The airline recently announced plans to triple its fleet size by 2012, starting with six new 737-800’s this year to take its fleet to 13. Phil Brugger, of Goodrich Corporation, and Ghaith Al Ghaith, flydubai’s CEO, celebrated the delivery of a next-generation 737 last-month.

Having recently announced new routes to Kuwait City and Muscat, flydubai has now revealed plans to serve Assiut in Egypt (three times weekly from 24 May) and Istanbul’s Sabiha Gökçen airport in Turkey (five times weekly from 17 June). Ghaith Al Ghaith, CEO of flydubai said: “The addition of these new routes is in line with our commitment to make travel to key destinations in this region more accessible and more affordable. These two routes are excellent examples of the type of destinations flydubai is committed to serving. Assiut currently has very few direct links to the UAE, so by offering this destination we are fulfilling our promise to make travel a little less complex, a little less stressful and a little less expensive. Although Istanbul is well known to many there is such a demand for short breaks to the city and to the country in general that we anticipate strong demand for our quality, low cost service.” 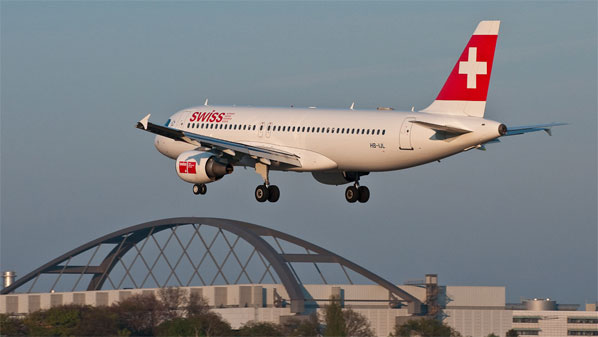 On 20 May, Swiss is to launch a new route - in direct competition with easyJet - between Basel and Hamburg, which will see the introduction of daily flight between the two cities. The route will effectively replace the route between Basel and Amsterdam on which Swiss also competes directly with easyJet.

Swiss has decided to drop one Basel route on which it competes head-to-head with easyJet, with a new Basel route, on which it will also compete with Europe’s second biggest LCC. From 20 May Swiss is dropping Basel – Amsterdam and replacing it with daily flights to Hamburg instead. According to the airline the new route will “not only serve one of Germany’s prime tourist and business destinations; it will also provide a daily air connection between two of Europe’s major logistics and forwarding centres. In addition to its general maritime charm, Hamburg offers a vast range of museums, theatre and musical entertainment and historic sights that include the city centre and its landmark St. Michaelis Church.” Basel is just one of three destinations served by easyJet from Hamburg; the others are London Gatwick and London Luton. 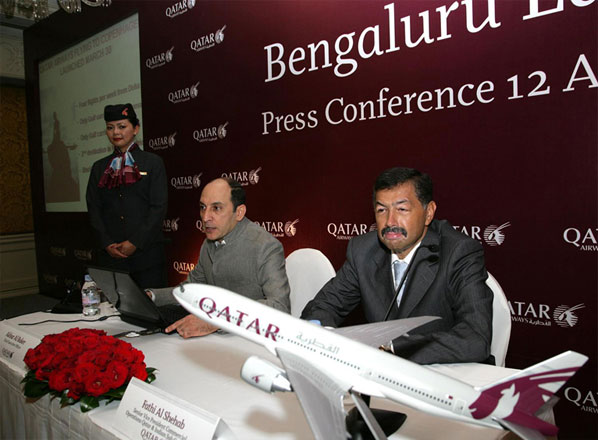 Qatar Airways CEO, Akbar Al Baker, and Fatih Al Shehab, SVP Commercial Operations, at yesterday’s press conference to mark the strategic air link between Doha and Bengaluru. Since the launch of daily non-stop flights in February, Qatar Airways has identified the service as one of its most successful start-up routes.

Brussels Charleroi Airport already has celebrated its millionth passenger this year – Ilse Lesage who travelled back from Istanbul with her whole family. This year’s first quarter, passenger numbers at the airport grew by an impressive 37% on last year. The Jetairfly crew were also presented with wine bottles and we are sure that the flight crew refrained from drinking and flying. 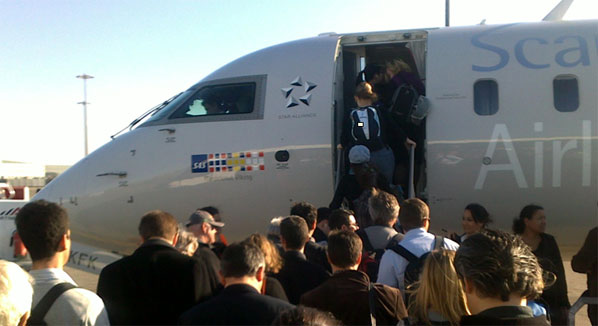 When SAS Scandinavian Airlines resumed its Copenhagen to Lyon service, it was with a new 88-seat CRJ900. The first flight on 6 April, which had a load factor of 86%, featured a raffle with the winner getting hold of another free ticket on the same route. Air France has responded by changing their CRJ200 service from stopping in Strasbourg to non-stop.