Almost 80% of US domestic routes are a monopoly; either of United’s possible mergers would have little effect on domestic competition

From a route planning perspective, a United+US Airways merger causes strains in the way the American airline model traditionally competes: There is only a tiny overlap of routes – instead the system is dominated by competing hubs. So while the merger would create a powerful force, it would also present a bigger target for Southwest, the ‘grandfather’ of low cost carriers with its contrasting concentration on point-to-point services.

As the US airline industry watches with keen anticipation to see what emerges from the on-going discussions between United and its potential partners, Continental and US Airways, anna.aero this week takes an analytical look at just how competitive US domestic routes really are.

Based on OAG schedule data for the third week in April, there are around 2,800 different non-stop airport-pair routes operated purely within the USA of which around 78% are provided by just a single carrier. The leading nine carriers (AirTran, Alaska Airlines, American, Continental, Delta, JetBlue, Southwest, United and US Airways) account for 93.5% of domestic seat capacity with Frontier in tenth place (1.6%), just half the size of JetBlue in ninth. A further 58 airlines including Allegiant, Hawaiian, Midwest, Spirit and Virgin America provide the remaining 5% of capacity.

Since nine carriers account for such a high proportion of total domestic capacity, the remaining analysis will focus on just these carriers and the routes they operate. These carriers (the US Domestic 9 – or USD9 for short) operate 2,260 routes between them with again around 78% operated as a monopoly (ignoring the capacity provided by the other 59 carriers).

It is worth noting that Hawaiian Airlines also operates between Los Angeles and Honolulu, while Virgin America connects New York JFK with both Los Angeles and San Francisco.

73 routes served by three of the USD9

A further 73 routes are served by three of the USD9 carriers, with 23 different permutations of carrier competition. The most common trio of carriers competing head-to-head are American, Delta and United (on 11 routes including Atlanta-Chicago and Los Angeles-Orlando) followed by American, Delta and JetBlue (on 10 routes from New York JFK). 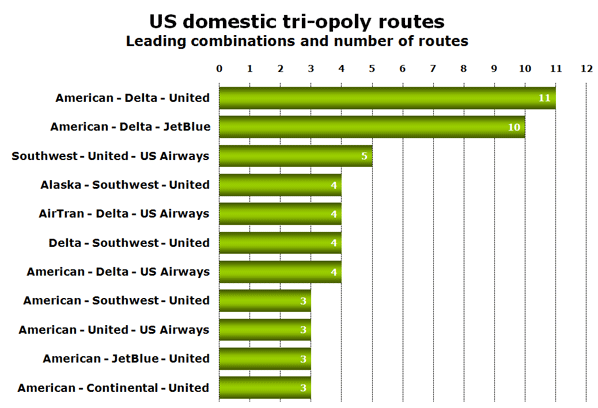 Around 18% of non-stop air routes operated by the USD9 carriers are served by two carriers. That’s just over 400 routes in all. The matrix below summarises on how many routes each of the possible permutation of airlines compete head-to-head.  The airlines that bump into each other most are American and United, which comes as no great surprise given that they share a hub at Chicago O’Hare.

United is part of a duopoly on 143 routes (it also shares 36 routes with Southwest), while Southwest (139 routes) and Delta (138 routes) also have plenty of duopoly routes. Continental, with just 52 duopoly routes, manages to avoid competition better than its rivals, taking into account the total size of the networks operated by the airlines.

Seen this table anywhere else? How the US airlines don’t overlap – just four routes in the case of US Airways-United, and eight for a United-Continental pairing.

All of this analysis is looking at purely point-to-point traffic. Of course, many US domestic passengers have to make one or more stops to get to where they want to go as no non-stop service may exist for their planned flight. This means that they often have a choice of connecting hub for their journey. When no non-stop service exists the way in which passengers will choose between competing one-stop services will be down to a range of criteria including cost, schedule quality, airline reputation, total journey time (including connection time), facilities and reputation of connecting airport and frequent flier programme membership.