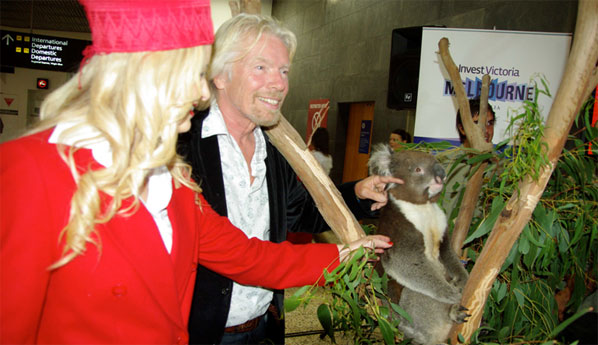 Elliot the Koala bear and Sir Richard Branson are both frozen in shock by the unexplained choice of hat by the V Australia stewardess at the Johannesburg-Melbourne launch on March 17. While Australia’s international traffic continues to climb to all-time highs, ‘new’ airlines such as V Australia and Emirates seem to be grabbing the growth at the expense of Qantas' market share. (Excellent photo by anna.aero’s friend Peter Kelly, junkersw34@hotmail.com)

International passenger numbers at Australia’s airports reached an all-time monthly high of almost 2.5 million in January, up 10% on the same period in 2009. This marks the fifth successive month that international demand has been up at least 9% compared with a year ago. While this would appear to be great news for Australia’s important tourism industry it is not such good news for its national carrier Qantas which has gradually been losing international market share in recent years, despite the creation of its lower-cost subsidiary Jetstar. 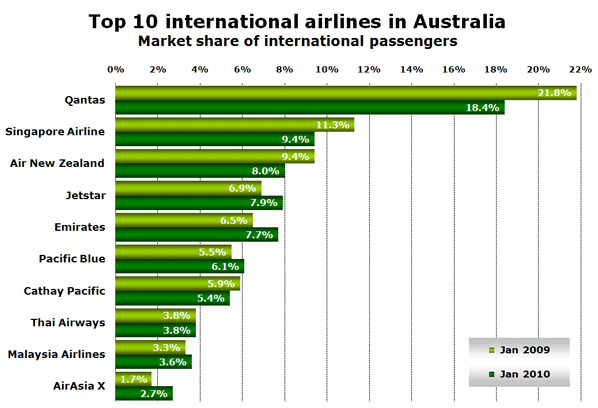 The Qantas group (Qantas and Jetstar combined) have seen their share of the international market fall from 28.7% in January 2009 to 26.3% a year later. Second and third ranked Singapore Airlines and Air New Zealand have also seen their market share fall while AirAsia X, Emirates, Jetstar and Pacific Blue have all seen their share increase. Just outside the top 10 is newcomer V Australia, which began operations just over a year ago in February 2009.

The launch of V Australia and its routes to Los Angeles have helped stimulate traffic between Australia and the US by 20% during the last 12 months. The US is now once again the number three country market after New Zealand and Singapore. 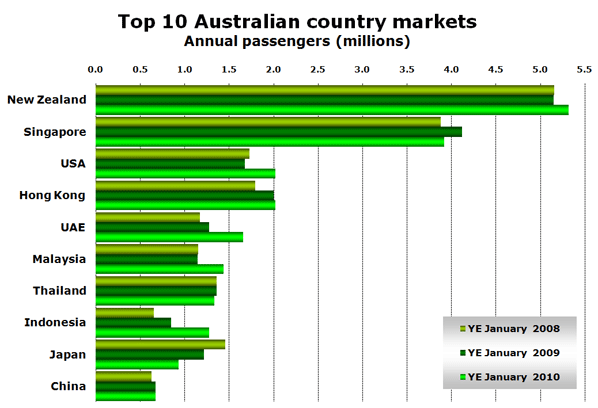 Other top 10 countries registering impressive demand growth are Malaysia (up 25% thanks to AirAsia X), United Arab Emirates (up 30% as Emirates continues to add capacity) and Indonesia, up 50% thanks to new services to Denpasar Bali from Melbourne (Pacific Blue), Sydney (Pacific Blue) and Perth (Indonesia AirAsia). 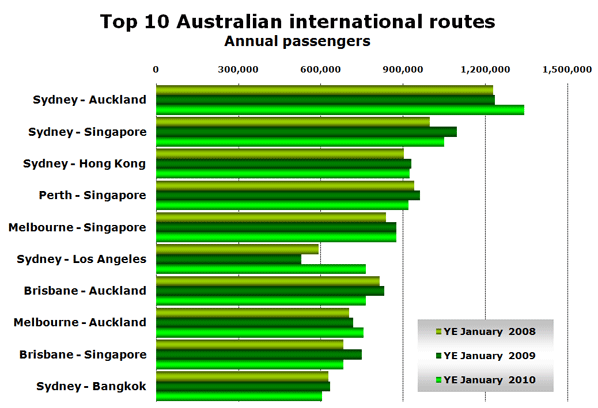 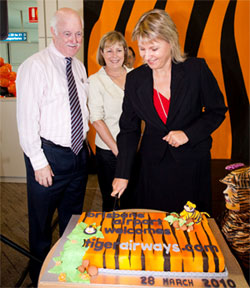 Tiger Airways' CEO Shelley Roberts cuts the cake at the start of Melbourne, Adelaide and Rockhampton services from Brisbane, watched by Queensland Minister for Tourism Peter Lawlor and Brisbane Airport CEO Julieanne Alroe. Tiger’s route launches in these and other markets have been instrumental in boosting Australian domestic traffic in a flat year.

Sydney to Auckland is still the top international city-pair and has grown by almost 9% in the last year partly thanks to the launch last April of daily flights by Jetstar complementing parent Qantas’ five daily flights. The Sydney – Los Angeles route saw growth of almost 45% thanks to the introduction of new services by both Delta (in July 2009) and V Australia (in February 2009) and the response from incumbents Qantas and United.

Domestic traffic demand was down by 1.5% in January after rising by 1.1% in December. Overall in 2009 domestic traffic was flat at 50.5 million passengers. However, load factors were up almost two percentage points to 79.7%, almost back to the record level of 2007. 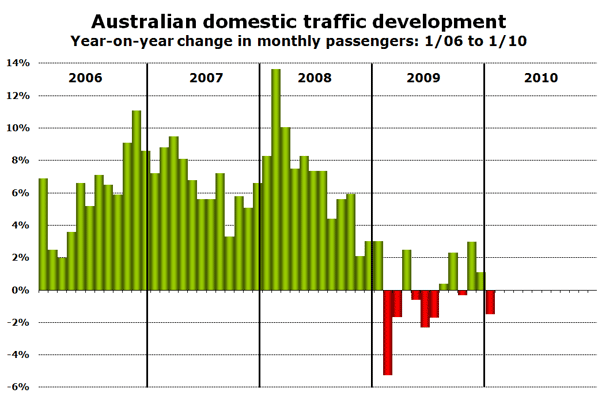 For the last three months traffic between Melbourne and Perth has been down by more than 10% on average. In January six of the top nine domestic routes reported a year-on-year drop in traffic, with Sydney – Melbourne and Sydney – Adelaide the notable exceptions. This is thanks to the start of flights by Tiger Airways on both of these routes last July. 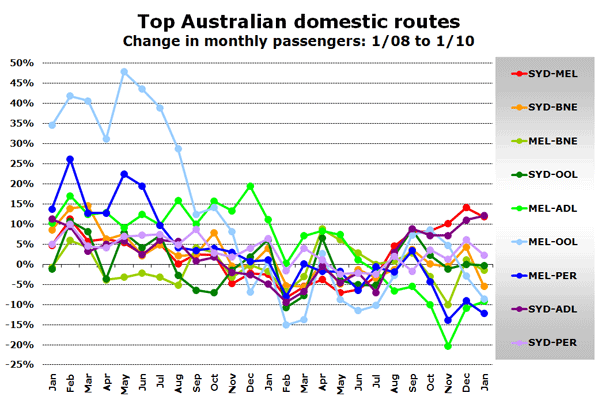