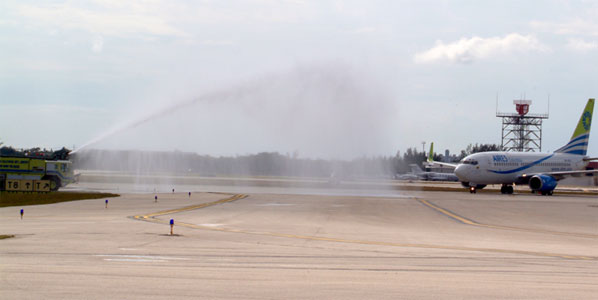 Fast-growing Aires, which more than trebled its domestic passenger numbers last year, seeks to grow further by expanding its international services. As of March this year, the airline serves Fort Lauderdale from three Colombian airports.

According to OAG schedule data, Colombia has 53 airports that currently offer scheduled airline services. The largest of these are Bogota, Medellin, Cali, Cartagena and Baranquilla, with Bogota by far the largest airport offering over five times as much seat capacity as Medellin. According to government statistics air travel demand in Colombia was fairly stable between 1998 and 2003, but has grown by around 50% in the last six years. International traffic is up almost 90% while domestic passenger numbers have risen by almost 40% during the same period. 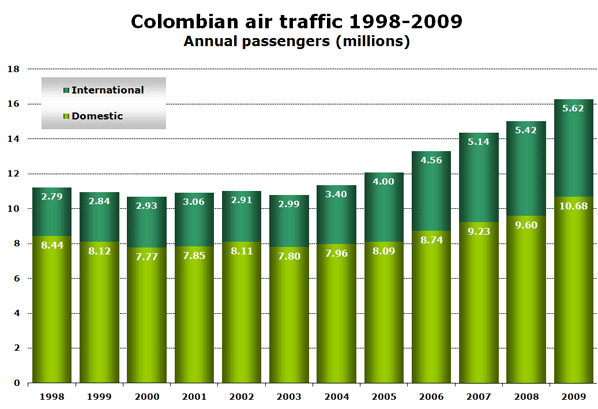 Dramatic surge in domestic demand in 2010

According to latest civil aviation statistics, Colombia’s domestic air traffic has grown by almost 40% in the first two months of 2010, while international traffic has increased by a more modest 6.5%. The surge in domestic demand has seen all seven domestic carriers increase their passenger numbers with Avianca the leading domestic carrier this year with a 35% share of the market. Aires (which operates a fleet of seven 737-700s, 11 Dash8-200s and one Dash8-300) has more than trebled its passenger numbers from 117,000 in the first two months of 2009 to 392,000 just one year later. It now has a 20% share of the domestic market followed by SAM and AeroRepública (both 17%) and Satena (7%). 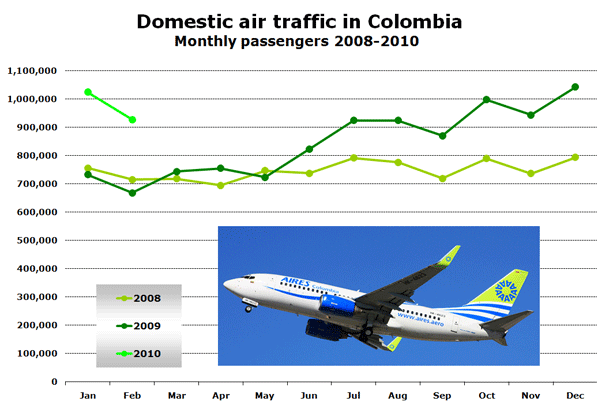 The top 14 domestic routes by demand all involve Bogota, with the routes to Medellin and Cali both generating 1.2 million passengers in 2009. 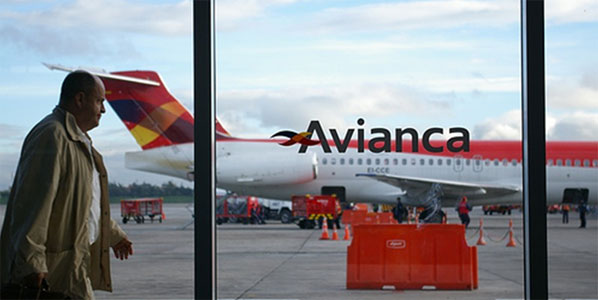 Avianca still in the lead: The airline which recently tied up with pan-Central American TACA has a firm grip at 38% of Colombia’s international market, while no competitor makes the 10% mark.

International air traffic in Colombia is focused on Bogota, which accounts for around 70% of all international seat capacity in the country, followed by Medellin with just over 10%. According to government statistics, Avianca is the leading airline on international routes with 38% of the market in 2009, followed by AeroRepública and American (both 8%), Copa (7%) and then Iberia, Continental, SAM and Spirit Airlines, each with between 3.5% and 4.5% of the market. Of these, Spirit Airlines was the fastest growing in 2009 with passenger numbers booming by 150% to 191,518 thanks in part to a new route between Fort Lauderdale and Medellin, which began in March 2009.

JetBlue began flights to Colombia in January 2009 when it began connecting Orlando with Bogota. This helped it to become the 15th busiest airline on international routes to Colombia last year with a market share of 1.5%. 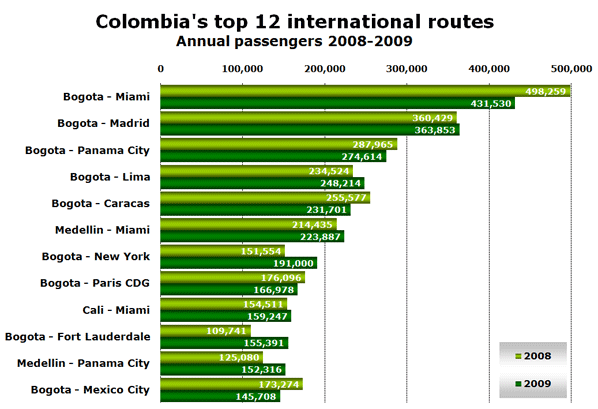 The top five international routes last year were all to and from Bogota with Miami, Madrid and Panama City leading the way. The fastest-growing routes in the top 12 were to Fort Lauderdale (+42%) and New York (+26%). Delta began daily New York – Bogota flights at the end of 2008, while Aires began linking Bogota and Fort Lauderdale last November. The US market accounts for 37% of international traffic followed by Panama (13%), Spain (11%) and Venezuela (7%).

New routes planned for the remainder of 2010 include a twice-weekly service by Avianca from Medellin to Madrid, which is due to launch in early July.