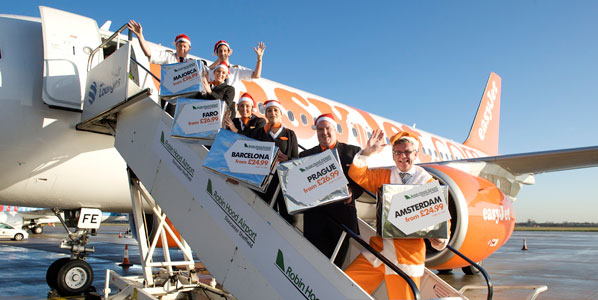 Ashes have postponed easyJet’s base launch at Doncaster Sheffield’s Robin Hood Airport, but as soon as the single A319 gets to fly, it will add five routes to the airport’s network. Celebrating the announcement back in December, Mike Morton, DSA’s airport director, won anna.aero's special ‘Least Convincing Santa of the Week’ award. The business case is, however, far more convincing.

Yesterday (Monday 19 April) was supposed to see the launch of easyJet’s newest base at Robin Hood Airport Doncaster Sheffield (to give it its rather cumbersome official title) in the UK. At present, just a single A319 will be based at the airport, which older readers may know better as RAF Finningley. A total of five routes are currently on sale to Amsterdam, Barcelona, Faro, Palma de Mallorca and Prague. The aircraft will operate three rotations each day; the morning one will alternate between Faro and Prague, the mid-day one will serve Amsterdam while the evening rotation is shared between Barcelona and Palma. Back in the winter of 2005, easyJet did serve Geneva from the airport, but this was with a Geneva-based aircraft.

Airport only opened in 2005; Spain and Poland are major markets

Commercial operations only began at Doncaster/Sheffield in April 2005 when Thomsonfly (now Thomson Airways) established a base at the airport. Annual passenger numbers passed the one million mark in 2007 but have since fallen. 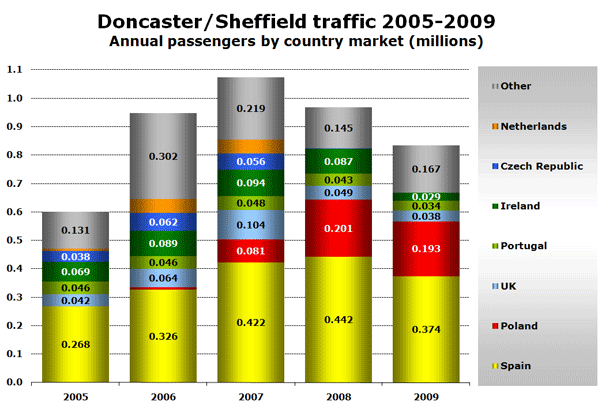 Routes to Spain have consistently been the most popular, followed in recent years by Poland. Wizz Air, which began serving the airport in July 2006 from Gdansk, has since added routes to Katowice (September 2006), Poznan (February 2008), Warsaw (April 2008) and Wroclaw (March 2010, though it also operated the route briefly in 2008). This suggests that the region may be something of a hotspot for Polish immigrants who have come to the UK since Poland was granted EU membership in 2004.

Flybe operates the only domestic routes to Belfast City and Jersey, while Aer Lingus Regional has taken over the Dublin route that was served by Ryanair between April 2005 and June 2009. Apart from Dublin, Ryanair has also operated flights to Girona (between October 2006 and October 2009) and Pisa (between September 2006 and October 2007). Since establishing a base at nearby Leeds/Bradford, its only remaining presence is a thrice-weekly seasonal summer service to Alicante which competes head-to-head with Thomson Airways. easyJet’s new Faro and Palma flights will also compete directly with Thomson Airways but the TUI carrier also operates scheduled flights to Las Palmas, Malaga, Monastir, Paphos, Sharm El-Sheikh and Tenerife Sur.