March 27: Continental added Newark-Munich as its fourth German destination making use of the connectivity it now has with its new alliance partner Lufthansa.

Since the opening of Munich’s new airport in May 1992 traffic has grown impressively. Between 1995 and 2006 passenger numbers doubled from under 15 million per annum to over 30 million, despite the impact of ‘9/11’ in 2001 and 2002. In 1996 it overtook Düsseldorf as Germany’s second busiest airport and now handles almost twice as many passengers as the country’s third busiest airport and is Lufthansa’s second base in Germany after Frankfurt. 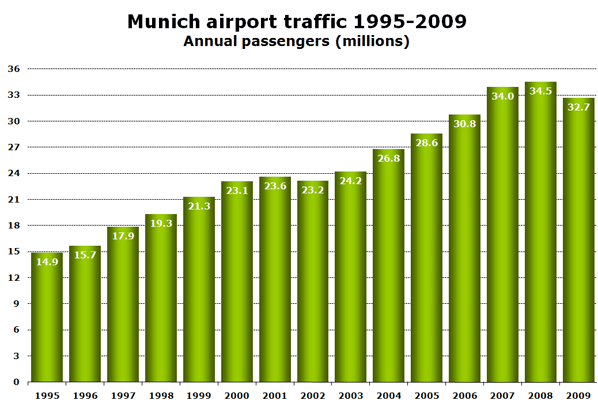 Traffic peaked in 2008 at 34.5 million, but while last year’s passenger numbers were down 5.4%, and still marginally down in January and February, Munich’s passenger numbers grew 11.3% in March meaning that traffic was up 3.3% in the first quarter of 2010. Lufthansa is dominant at the airport serving 100 international destinations non-stop as well as 15 domestic points. It has over 60% of scheduled capacity at the airport and almost two-thirds of all scheduled flights. The next three biggest carriers are also all German with airberlin the only other airline to achieve a greater than 10% share of capacity.

The leading non-German airlines are easyJet, Air France, British Airways, Aegean Airlines and United. easyJet serves four destinations (all in the UK) with London Gatwick services starting last April and Manchester flights last November. According to OAG data a total of 65 airlines operate scheduled services to and from the airport including four of the big five major US international carriers (Continental, Delta, United and US Airways, but not American) as well as all three of the big Middle East carriers (Etihad, Emirates and Qatar Airways). Ryanair does not serve the airport but does have a presence at Allgäu-Memmingen airport around 100 kilometres west of Munich which it markets as Munich (West).

Almost 30% of the airport’s seat capacity is allocated to German domestic routes where airberlin and Lufthansa compete head-to-head on six routes to Berlin Tegel, Cologne/Bonn, Düsseldorf, Hamburg, Hannover and Münster/Osnabruck. The leading international markets are Italy, Spain and the UK, followed by USA and France. 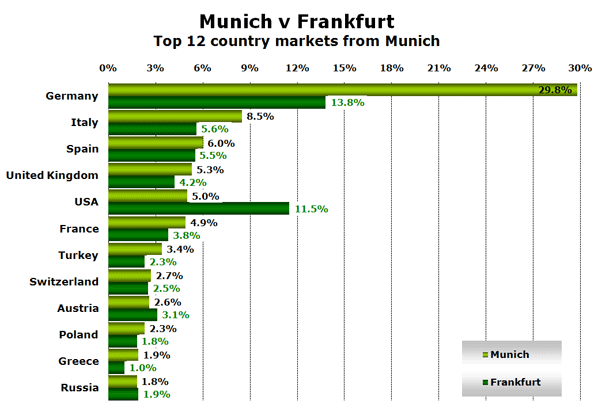 A comparison with the capacity share by country at Frankfurt (for all carriers) reveals significant similarities but also some differences. There are many more US flights from Frankfurt while domestic flights play a more prominent role in Munich. The top 12 country markets from Munich account for 74% of capacity while the same 12 county markets are responsible for just 57% of capacity at Frankfurt.

As with all major airports there have been several network changes in the least two years. The table below summarises which services have been lost and which new services have begun. This analysis ignores any routes that are (or have been) served with less than three weekly frequencies. Lufthansa has dropped routes to Bern, Bratislava, Denver, Dortmund and Yerevan, but also added new routes to Bari, Cairo, Dubrovnik, Lviv, Miami, Mumbai, Rostock-Laage, Singapore, Split, Tallinn, Tashkent and Tel Aviv.

A number of other services have started and ended between April 2008 and April 2010 such as Aer Lingus’ service to London Gatwick, and MyAir’s brief service to Brindisi.

A raft of further new routes has been announced to start during the remainder of the year. These include:

Lufthansa’s influence at bmibaby sees the low-cost airline re-start Cardiff and East Midlands routes this autumn which it operated briefly way back in 2002-03. Next week’s planned launch of flights by Mapjet to Vienna will be the inaugural route (along with Frankfurt) for the Embraer E190 operating airline.