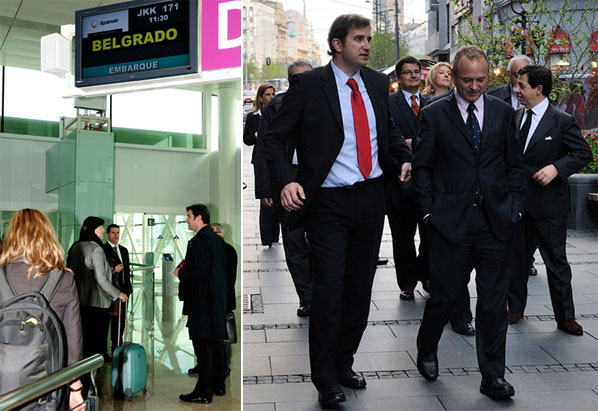 The launch of Belgrade services last week is a big departure for Spanair, shifting its axis from North-South (inherited from its SAS roots), to a new and very innovative South-to-East Europe and Spain-to-North Africa expansion. The airline’s new president, Ferran Soriano, and CEO, Mike Szücs, are here seen walking in Belgrade upon arrival in the Serbian capital.

The Star Alliance member Spanair, which began operations in 1988, is going through major change. Since anna.aero last analysed the airline two years ago, it is no longer a subsidiary of its founder SAS Group, the new Catalan main shareholders have moved the headquarters from Majorca to Barcelona, introduced a new logo and livery and the airline’s management team has largely been replaced as a number of Scandinavians have returned to SAS. The new CEO, Briton Mike Szücs, notably brings LCC experience from both easyJet and vivaaerobus with him as the airline changes its strategy. 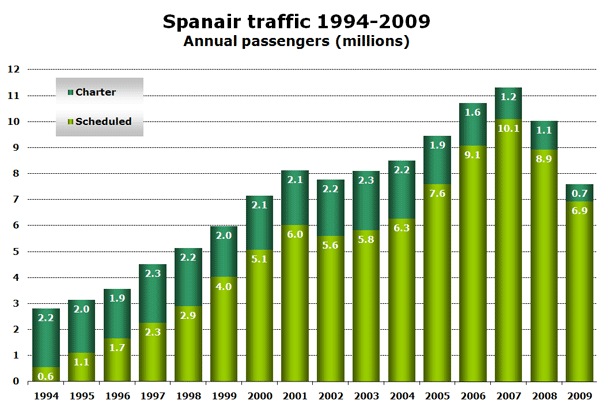 Having once operated majority charter services, the scheduled part of Spanair’s operations has come to dominate over the last decade. Since the airline’s peak in 2007, passenger numbers have, however, fallen by nearly a third. Between 2007 and 2009, the airline dropped 12 destinations from its network and launched only three. In 2010, the airline will, however, expand dramatically and add 13 new airports to its network, reaching a total of 40 destinations.

As for all European network carriers, Spanair’s competitive landscape has changed dramatically over the years. The Spanish short-haul market (Spanair’s long-haul services were abandoned in 2002) has a high LCC penetration. It is no longer considered viable to operate a Spanish network carrier whose only international routes are to Germany, Scandinavia and Austria as well as Portugal and Equatorial Guinea, which was the case for Spanair in 2003.

The “new” Spanair will therefore differentiate by venturing into niche markets this year, where LCCs have not reached to the same extent. This week saw the launch of flights to Morocco, Croatia and Serbia and the airline has announced further new routes to Algeria, Italy, the UK, Turkey, the Gambia, France, Israel and Malta. Of the international markets served in 2003, only Germany, Sweden and Denmark remain, although Spanair’s capacity to Germany has been cut by over a third since last year. 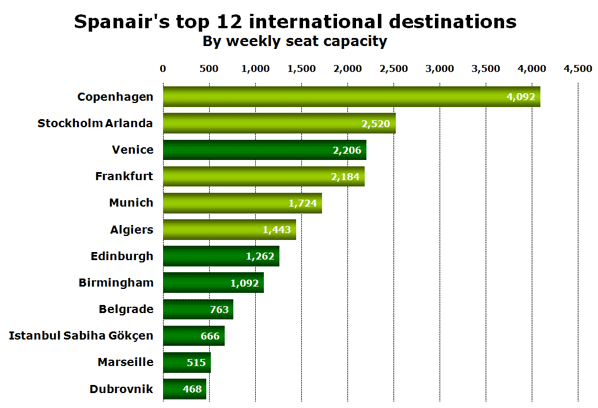 Interestingly, Spanair has chosen to serve Istanbul’s Sabiha Gökçen Airport (SAW) from 4 May, where alliance partner Turkish Airlines only has a limited presence, rather than the Star Alliance hub Atatürk Airport (IST). As already reported by anna.aero, Vueling is aggressively targeting Spanair’s new routes and has announced its intention to compete on both the Istanbul and Edinburgh services.

The Spanish domestic market still is immensely important to Spanair, making out an entire 82% of the airline’s capacity this year. Iberia is the only airline to offer more capacity domestically, more than twice as much as runner-up Spanair. 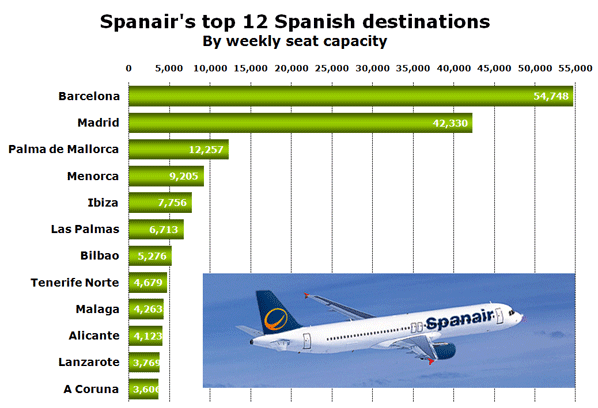 Although Madrid Barajas (MAD) long has been the airline’s major base, Spanair has scaled back its operations at the airport and consolidated at Barcelona (BCN), which, as of this year, is the airport where the airline offers the most capacity. Spanair ranks as number 2 in Barcelona, somewhat ahead of Iberia, but with a third less capacity than leading airline Vueling.

Having once been where SAS sent its ageing MD80s, Spanair is planning to phase out the type and replace it with aircraft from the A320 family. This would leave the airline with fleet consisting of A320 family and only four of Boeing’s rare 717s. Although the smaller, young and efficient 717s provide Spanair with the flexibility to operate more narrow routes, there may be economic benefits in also divesting this fleet in order to gain the commonality competing LCCs have by operating single fleets. 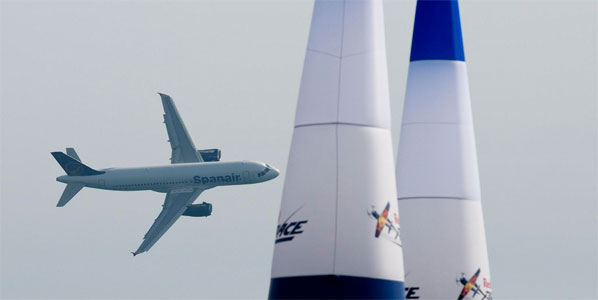 Spanair took the opportunity to show off its new livery at the Red Bull Air Race in Barcelona last October, which the airline sponsored.