With British Airways and Iberia having apparently finalised the terms of their merger, anna.aero was curious to see how the global networks of the now three major European airlines with global networks compare. In terms of passenger numbers in 2009, British Airways (32.3 million) and Iberia (20.5 million) transported a total of 52.8 million people. This is still significantly fewer than the 70.2 million for Air France (47.9m)/KLM (22.3m) and 87.4 million for Lufthansa (53.2m) and its subsidiaries Austrian (8.5m), bmi (7.4m), Brussels Airlines (4.7m) and Swiss (13.6m).

However, in terms of ASKs (available seat kilometres) in 2009, the figures for the three airlines are much closer with Air France/KLM leading the way with 250.5 billion, followed by 235.9 billion for Lufthansa Group, and 205.5 billion for British Airways/Iberia. (Source: AEA) This is only for scheduled traffic operated by the main airlines and does not include low-cost subsidiaries, such as bmibaby, germanwings and Transavia.com, or airlines in which the airlines have a major share, such as Vueling in Iberia’s case.

Ignoring European destinations, according to OAG schedule data for April, Air France/KLM has the greatest global network reach, serving 118 airports across the rest of the world. This compares with 105 for Lufthansa Group and 99 for British Airways/Iberia. 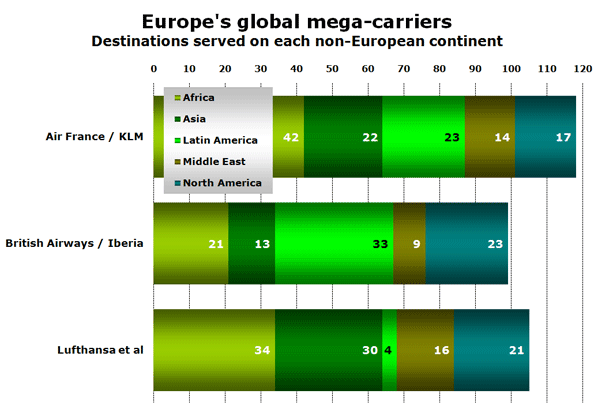 Despite serving the most non-EU airports, Air France/KLM is the leading carrier in only one of the five geographic regions analysed; Africa. British Airways/Iberia is top for Latin America (mostly Iberia) and North America (mostly British Airways), while Lufthansa Group has the widest choice in Asia and the Middle East.

Lufthansa’s “weakness” in Latin America (serving just Buenos Aires, Caracas, Mexico City and Sao Paulo) can be explained by looking at the alliances they belong to. Star Alliance used to have both Mexicana and Varig as members in Latin America, but the former left in 2004 and the latter in 2007. However, the Brazilian carrier TAM is expected to join Star next month. Lufthansa’s “strength” appears to be in Asia where it serves 30 destinations, eight more than either of the other airlines. Most of these are served non-stop from either Austria, Germany or Switzerland, but some are served as one-stop flights, such as Kuala Lumpur (via Bangkok) and Jakarta (via Singapore).

Only British Airways makes it all the way to Australia

If weekly flights from the airports in the region are analysed, the relative strengths and weaknesses of the various carriers remain mostly unchanged.

Lufthansa now has twice as many flights to the Middle East as its rivals with Tel Aviv (53 weekly departures) and Dubai (35 weekly departures) the two busiest airports. British Airways/Iberia under-performs in Asia with Iberia not operating any service to the region. However, BA aircraft do at least make it all the way to Australia (Sydney via Bangkok and Singapore) unlike any of the other carriers here who rely on their alliance partners to take European passengers ‘down under’.

The appearance of Tripoli at number three in BA/Iberia’s African destinations may come as a surprise to those who recall the many years of political animosity between the UK and Libya. However, BA now serves the Libyan capital with twice-daily flights from London Heathrow.