Dr Vijay Mallya, the boss of the UB Group (United Breweries), clearly likes a challenge and obviously does not pay too much attention to perceived wisdom. How else to explain the decisions during the last few years to start not only an airline, but also to take control of a struggling Formula 1 racing team? Both are normally guaranteed ways to lose a fortune very quickly. But in the space of six years, Mallya has helped make Kingfisher Airlines, through rapid organic growth but also through acquisition, one of the top two domestic airlines in India, and a growing player in the international market. Meanwhile, his Force India Grand Prix team has also established itself as a solid mid-grid race team rather than one which was regularly to be found at the back of the grid when he bought the team.

The airline started operations on 9 May 2005 when daily flights between Bangalore and Mumbai were introduced with an A320. The airline’s fleet of A319s and A320s grew rapidly as did the spread of the domestic network. International routes were off-limits to the airline under Indian rules that require an airline to operate domestically for five years before being permitted to fly outside of the country. 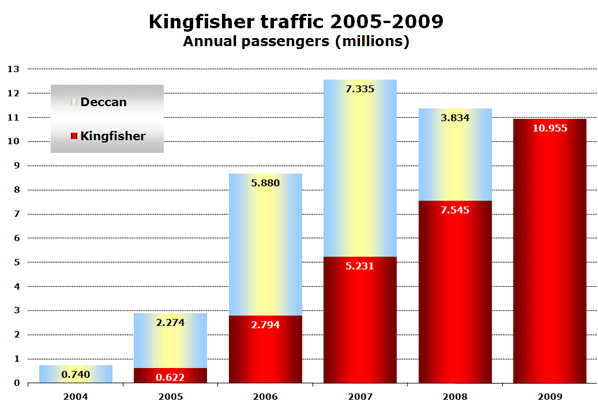 Kingfisher’s share of the domestic market grew rapidly, but the emergence of several new carriers at around the same time (Air Deccan, GoAir, Indigo and Spicejet) resulted in an explosion of domestic capacity and demand triggered by a steep reduction in average fares. However, profits were rather harder to come by and some rationalisation was always likely. In late 2007, it was announced that Kingfisher would buy Air Deccan. However, to take advantage of the fact that Air Deccan had been around since August 2003, Kingfisher was effectively merged into Air Deccan, which was then re-named. 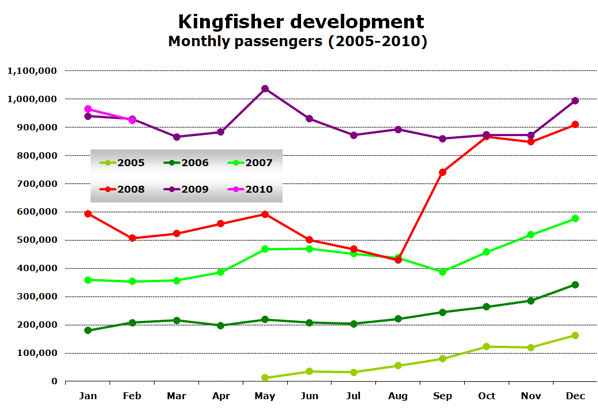 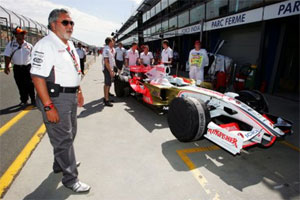 Vijay Mallya’s Force India Formula 1 racing team is exceeding expectations this season, currently placed 6th in the standings out of a total of 12 teams. The two drivers - Adrian Sutil and Vitantonio Liuzzi - have already scored more points in the first four races of this season than they did all last year. Mallya also owns the Royal Challengers Bangalore cricket team, which plays in the Indian Premier League.

Air Deccan’s low-cost operations, which involved a significant number of ATR turboprop aircraft for serving smaller communities, were re-named Kingfisher Red from 1 September 2008 (hence the jump in the above figures). Since then, Kingfisher’s growth has slowed as the global economic difficulties also affected demand for air travel in India. As a result, its share of the Indian domestic market fell from 28% at the beginning of 2009 to just 21% at the end of the year.

In the summer of 2008, Kingfisher decreased domestic capacity by 25% to ‘rationalise industry capacity’. A further 13% of capacity was cut in June 2009 to balance supply with demand. At the same time, Kingfisher Red’s share of total capacity rose from 40% to 65%. (Source: Kingfisher presentation – March 2010)

Leading carrier in Bangalore and Hyderabad

According to current OAG schedule data, Kingfisher’s top 6 airports (based on weekly departures) are Delhi, Mumbai, Bangalore, Chennai, Hyderabad and Kolkata. At the new airports in Bangalore and Hyderabad, it offers more daily departures than any other airline. 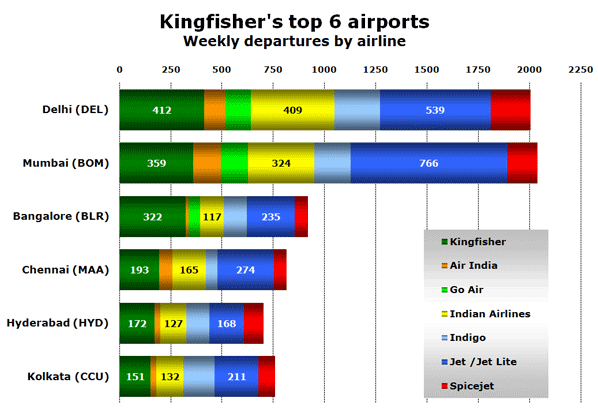 Jet Airways (and its subsidiary Jet Lite, which used to be Air Sahara) is Kingfisher’s biggest local rival followed by state-owned Indian Airlines. At present, the airline operates to 69 airports worldwide including eight outside of India. Bangkok, Colombo, Dhaka, Dubai, Hong Kong, London and Singapore were joined this week by Kathmandu when Kingfisher began flying to the Nepalese capital from Delhi. Mumbai to Kathmandu flights are now scheduled to start on 1 July. The airline’s first international route from Bangalore to London was started in September 2008 but was dropped a year later in favour of a Delhi to London service.

Earlier this year, the airline announced that it would be joining the oneworld alliance in 2011, subject to regulatory approval. Local rival Jet Airways is not yet a member of any global alliance.