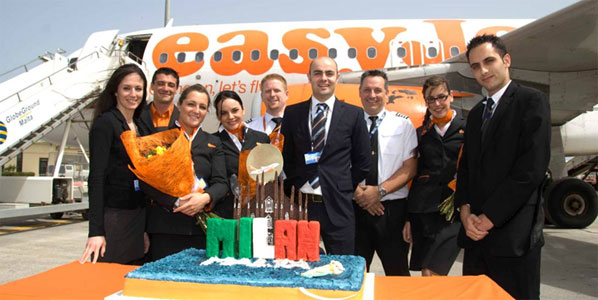 When easyJet added flights to Malta from its second Italian base, this stunning cake welcomed the crew, along with Tina Lombardi, Alan Borg and James Baldacchino of the airline marketing team at Malta International Airport. easyJet now offers six destinations from Malta, making it the airport’s third largest airline.

The small island nation of Malta is the setting of the current ACI EUROPE Airport Trading Conference and Exhibition. Although the country has only 415,000 inhabitants, its tourist appeal and isolated location makes it highly dependent on air services.

The country has only one airport, making the word ‘international’ in the name Malta International Airport rather redundant. There is, however, a heliport on the island of Gozo, to which there have been scheduled helicopter services from the main island in the past. 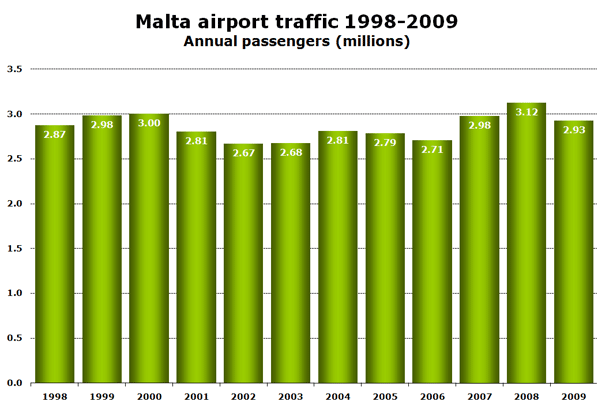 The passenger numbers in Malta have been very flat over the last decade. A minor trough followed 9/11 and the figures achieved prior to that were only surpassed in 2008. Nonetheless, the traffic reported has been between 6.5 and 7.5 times the country’s population. The greatest growth took place in 2007, when numbers grew by 10% on the previous year. It can be expected that 2010 will see the airport grow further, as the scheduled capacity this year is 14% higher than 2009. 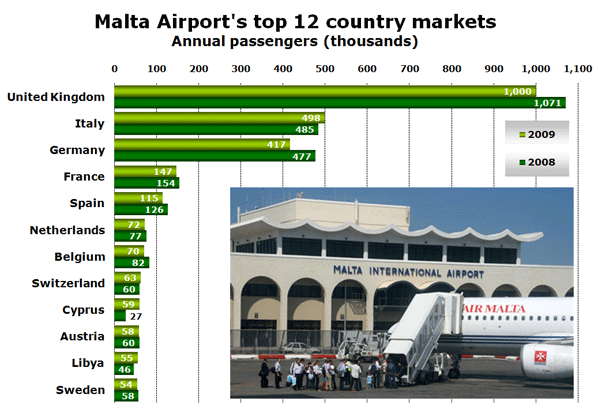 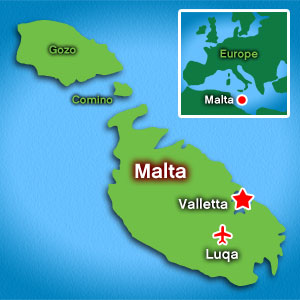 United Kingdom, the former colonial power, dominates Maltese traffic, followed by the neighbour country Italy, which grew between 2008 and 2009, and the German market. Cyprus stood for the largest growth by far, with passenger numbers rising by over 120%. The route between the two countries is operated by Emirates, stopping in Larnaca on its way from Dubai. However, the figure does not include the passengers that embark in the United Arab Emirates and merely transfer at Larnaca. In 2009, these passengers exceeded 50,000.

Six new routes so far this year; Ryanair establishing base in May

In the four months of this year, an impressive six new routes have already started to or from Malta. easyJet, Ryanair and Norwegian have all added two routes each. easyJet now offers links from its Italian bases at Rome Fiumicino and Milan Malpensa, while Norwegian connects its two bases in Oslo and Copenhagen with the Mediterranean island. Ryanair has added flights from both Bournemouth and its new base at Leeds/Bradford.

This May, Ryanair will establish a base in Malta, basing one aircraft at the airport and thereby adding six routes to its existing network of 13 destinations. A further eight routes have been announced to start this year on other airlines. Air Malta adds Genoa, Turin and Naples in Italy as well as Damascus in Syria, while easyJet will launch flights from Liverpool, bmibaby from East Midlands, Spanair from Barcelona and SmartWings from Prague.

Air Malta’s serves twice as many destinations as Ryanair

This summer, Air Malta will dominate with 55% of seat capacity, followed by Ryanair, which will be the airport’s second locally based airline. With its offering of 19 routes, Ryanair offers half as many destinations as Air Malta does. Because of lower frequencies, the Irish LCC’s capacity is, however, just over a third of that of the national carrier.

Among the top 10 airlines at Malta, Emirates is the only extra-European carrier. Libyan Airlines, Tunisair’s subsidiary Sevenair and Egyptair Express also serve Malta, but with low-capacity regional aircraft. Emirates is also the only airline to serve Malta with wide-body aircraft, A330-200s.