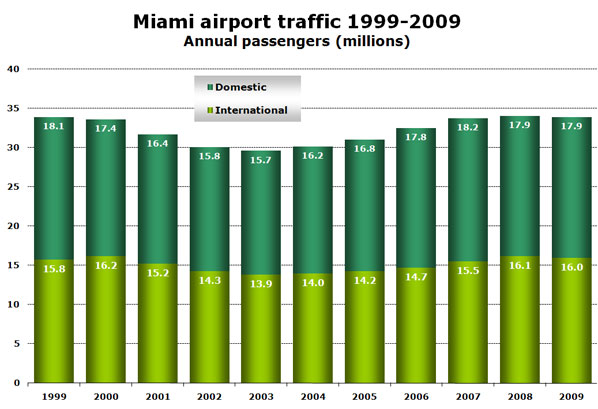 The airport’s seasonality is relatively flat, with the peak month July only reporting passenger numbers a third higher than during the February low season in 2009.

American Airlines dominates; United has smallest presence of US majors 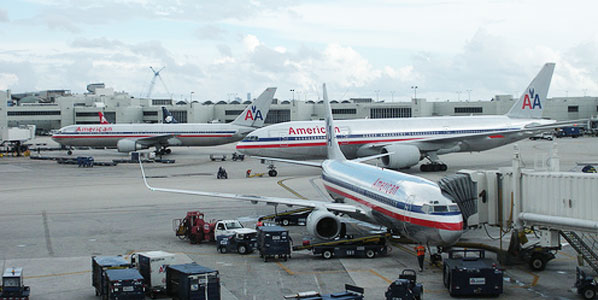 With 70% of both seat capacity and frequencies, American Airlines and its regional subsidiaries hugely dominate Miami. No other airline offers more than six routes, which is what Continental and Delta each offer out of Miami. American Airlines offers 106 destinations non-stop.

Four of the five US major airlines top the list of the 12 largest airlines at Miami. United Airlines’ presence is limited, being surpassed by six foreign carriers that all offer more capacity. Notably, Latin American carriers’ presence in the top 12 vouches for Miami’s status as a hub for flights between the US and Central and South America as well as the Caribbean.

#1 in US on Latin American and Caribbean capacity and routes; London Heathrow biggest international market

Miami is by far the US airport with the most capacity to Latin America and the Caribbean, offering more than twice as many seats as runners-up New York JFK and Houston. It also offers the most number of routes to these regions of any US airport – 61 – which beats Houston’s 52 and Atlanta’s 46. Nearby Fort Lauderdale airport offers 35 routes to the two regions, which is the same number as is offered from New York JFK.

In spite of the US embargo against Cuba, Miami is the main gateway for flights between the two countries. These Special Authority Charters are, however, not available to the general public, but only for passengers holding special licenses, such as researchers, journalists and government employees. 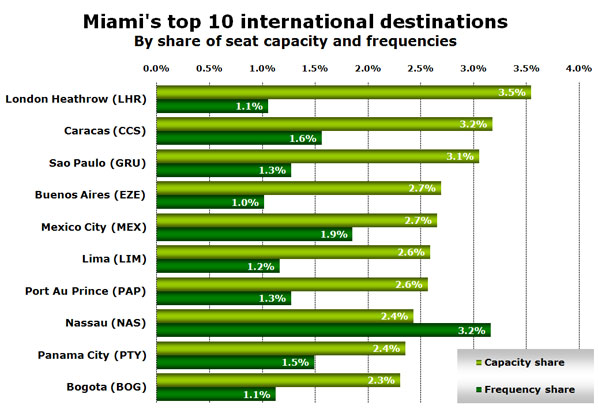 So far this year, Miami has seen the launch of flights from Madrid on Air Europa, which compete with American Airlines’ and Iberia’s services, a Lufthansa link from Munich as well as domestic American Eagle links to Birmingham, AL and Pensacola, FL. Further routes announced to launch this year are Alitalia’s resumption of flights from Milan Malpensa, which complement its Rome Fiumicino services, Corsairfly’s seasonal route from Paris Orly and American Airlines beginning services to Tulsa, OK. All three routes are scheduled to launch in June.