New routes within Ireland, to Syria and out of Budapest 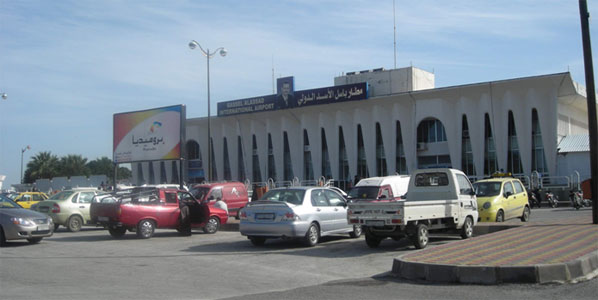 Latakia’s Bassel Al-Assad International Airport: “Adding Latakia to our existing routes of Damascus and Aleppo demonstrates the importance of Syria as a key destination to flydubai” says the airline’s CEO Ghaith Al Ghaith.

There seems to have been a sudden outbreak of new routes involving airports in Syria. This week, flydubai revealed Latakia as its latest destination (and third in Syria) from 20 June. Ghaith Al Ghaith, flydubai’s CEO said: “Adding Latakia to our existing routes of Damascus and Aleppo, demonstrates the importance of Syria as a key destination to flydubai. Thanks to flydubai, Dubai’s growing Syrian expatriate population and the 500,000-strong community in Latakia now have even better access to quality, safe and low-cost air travel.” According to the airline, Latakia is Syria’s busiest and most modern seaport located to the south west of the urban centre of Aleppo and has been an important trading and agricultural hub since ancient times, known for its tobacco, cotton and fruit exports. The city is also increasingly gaining a reputation as a first-class tourism destination, thanks to its pristine beaches, picturesque mountains and rich archaeological heritage.

Earlier this year, it was announced that Iberia would be starting seasonal weekly flights from Madrid to Damascus starting in July using an A319, while Turkish Airlines’ low-cost subsidiary Anadolujet began flights from Ankara to Damascus in March. Air Malta will also begin twice-weekly seasonal flights from Malta on 7 June.

New Irish domestic route to be operated by Manx2.com 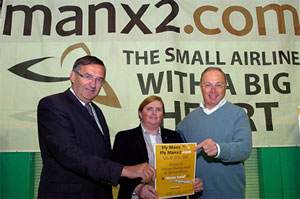 The small airline with a big heart: Manx2.com chairman, Noel Hayes (right) donates an appropriate 21 Gold Class return tickets to ‘Project 21’ an Isle of Man charity for people with severe learning. Hayes says there’s nothing charitable about the new Cork-Galway service: “We have great confidence in the long term future for the Irish economy.”

From the beginning of July, Manx2.com will start twice daily Irish domestic flights between Cork and Galway. The two airports are just 170 kilometres apart, but travel time between the two locations can take three hours by road according to the airline. Manx2.com chairman Noel Hayes said: “We have great confidence in the long term future for the Irish economy and are delighted to bring our award-winning Manx service to communities throughout the South and West of Ireland. With 14 flights per week we are improving connectivity between Cork and Kerry and bringing the many attractions of Galway and the West within easy reach and in turn we are hoping to stimulate commerce and tourism in both these regions.” Welcoming Manx2.com’s decision to commence operations from Cork to Galway, Kevin Cullinane, Aviation Marketing Manager at Cork Airport, said: “It gives me great pleasure to welcome Manx2.com to Cork Airport. The addition of this new route will assist the economic, tourism and social interaction between our two great cities and enhance the prospects of attracting significant investment to the regions via the Cork and Galway gateways.” Galway airport’s only other scheduled services this summer are all operated by Aer Arann to Edinburgh, London Luton and Manchester in the UK, Dublin and Waterford in Ireland, and Lorient in France. Last September’s Wizz Air launch to Düsseldorf Weeze. The airline will serve 22 destinations from Budapest this summer following the decision to base a fourth A320 at the airport. However, all the new jobs in network planning, scheduling and revenue management are being created in Geneva, as the airline's headquarters move to the Swiss city.

Although Wizz Air was conceived and is based in Hungary, it offers fewer weekly departures from Budapest than it does from London Luton or Katowice. According to our analysis of Wizz Air last September, Hungary ranks only sixth as a country market for Wizz Air after Poland, UK, Italy, Romania and Germany. However, this may be about to change as the airline has recently indicated that it plans to base a fourth A320 at the airport from 24 July, increase frequency on a number of routes, start a new route to Bari in Italy, and re-start Frankfurt Hahn flights after a three year hiatus. “Recently we have been experiencing a strong shift of customer preference towards Wizz Air in Hungary resulting from our own expansion in a declining market as well as the weaknesses of competing airlines.” said József Váradi, CEO of Wizz Air. Kam Jandu, Director Aviation of Budapest Airport, added: “The timing of Wizz Air’s commitment to 20% passenger growth this year with a 4th aircraft sends a clear message that Budapest remains a primary origin and destination for both business and leisure travelers alike and we hope it lays a foundation for further expansion in the future.”

The airline will serve 22 destinations from Budapest this summer, although according to anna.aero’s database, Wizz Air has operated scheduled services to almost 40 different destinations from Budapest since it began operations there in June 2004. Routes no longer served include Amsterdam, Athens, Bucharest, Dortmund, Liverpool, Oslo (Torp), Paris (Beauvais), Prague, Sofia and Warsaw.

Although the airline does not serve Geneva, according to the airline’s job page, a number of management positions (including scheduling and revenue management posts) are being advertised which will require the successful candidate to be based in the Swiss city.