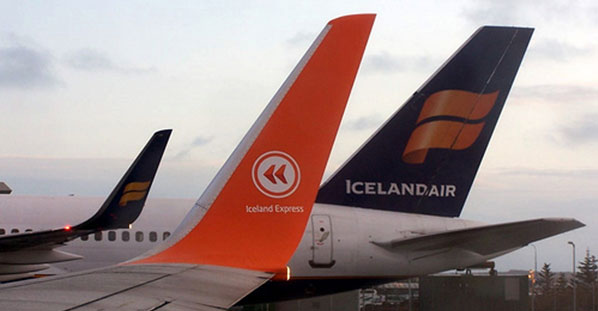 What? No volcano? Yeah for once we resisted the urge. New routes for this summer include Icelandair to Brussels and Trondheim while Iceland Express has a lengthier list of Birmingham, Milan Bergamo, Rotterdam and... Newark (four times weekly) and Winnipeg (twice weekly) starting in June.

Being a relatively small, remote island, air transport plays a vital role in sustaining and developing the Icelandic economy. Ironically, the recent volcanic eruption, which resulted in much of European airspace being closed for several days, had less impact on the island’s own airports. Iceland’s main international airport at Keflavik serves the capital Reykjavik, although Reykjavik has its own airport suitable only for domestic flights. Passenger numbers at Keflavik airport grew almost 80% between 2002 and 2007, helped by the creation of Iceland’s very own low-cost carrier Iceland Express. 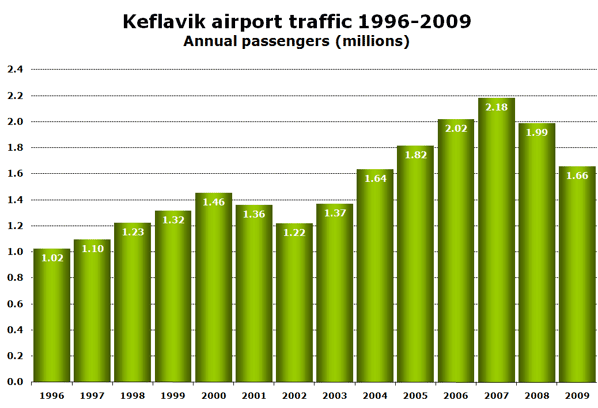 The Icelandic economy suffered particularly badly from the recent banking crisis and last year’s passenger numbers at Keflavik were down 24% from the peak of 2007. Despite the downturn, the airport’s seasonality profile has remained unchanged with demand in July around three times higher than in the off-peak months of January and February. 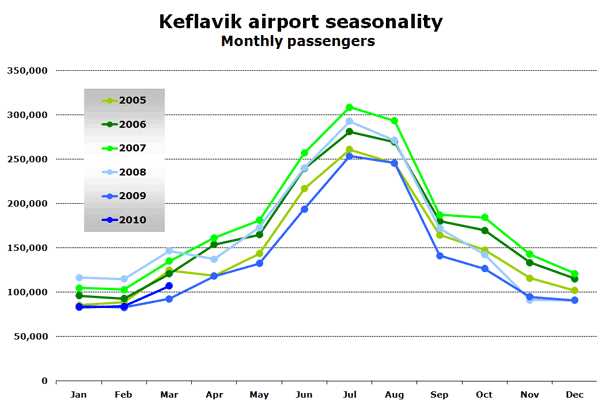 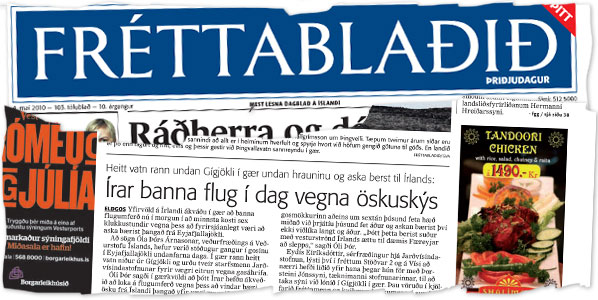 OK, just one volcano reference: For those of you with rusty Icelandic, our journalistic colleagues on Reykjavík's daily "Fréttablaðið" share all our concerns about the impact of the depressing Ash Cloud once again drifting across Ireland and parts of the UK this week. The good news is that the delicious-looking Tandoori chicken meal advertised on the right is only $11.50. Iceland is now a diner's bargain!

Analysis of schedule data for this summer reveals that Icelandair and Iceland Express share over 90% of scheduled seat capacity at Keflavik airport. No other European country’s international air links are so dominated by its home carriers. 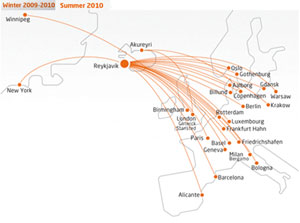 Apart from SAS (from Oslo), the only other European flag carriers serving Keflavik are Lufthansa (from Düsseldorf and Hamburg) and Austrian (weekly flights from Vienna in competition with airberlin partner niki).

New European routes for this summer include Icelandair to Brussels and Trondheim; Iceland Express to Birmingham, Milan Bergamo and Rotterdam (replacing Eindhoven); Transavia.com to Paris Orly and airberlin to Berlin Tegel. Iceland Express is venturing even further afield with the introduction of westbound departures to Newark (four times weekly) and Winnipeg (twice weekly) starting in June.

All Icelandic domestic routes are operated by Air Iceland (part of the Icelandair Group) from its base at Reykjavik airport, using a turboprop fleet consisting mostly of Fokker 50s. The busiest route to Akureyri is served with up to 11 daily flights. The airline also operates flights to Greenland and the Faroe Islands. According to Icelandair’s most recent annual report, Air Iceland carried 422,000 passengers in 2008, including 22,000 on international flights.

In terms of foreign country markets, the country’s former colonial power Denmark leads the way this summer with 40 weekly departures from Keflavik, followed by Germany (37), USA (36), UK (29) and Norway (22). A total of 18 countries are served non-stop from Keflavik including Italy, Luxembourg and Poland. Iceland Express’ two weekly flights to Luxembourg this summer make it the only low-cost carrier serving the Grand Duchy.

Icelandair’s network of US destinations consists of Boston, New York JFK, Minneapolis/St Paul and Seattle. The airline actively promotes the idea that European travellers should visit the US with a stop in Iceland. The German market offers the most options out of Iceland with five carriers (airberlin, germanwings, Iceland Express, Icelandair and Lufthansa) serving a total of 10 different German airports.

Traffic data from the UK CAA shows that in 2009, some 322,000 passengers flew between the UK and Keflavik, representing almost 20% of all Icelandic international traffic. The London Heathrow route generated just over 200,000 passengers (all on Icelandair) with additional traffic going to London Gatwick and London Stansted. This makes London one of the top two city destinations from Iceland along with Copenhagen.