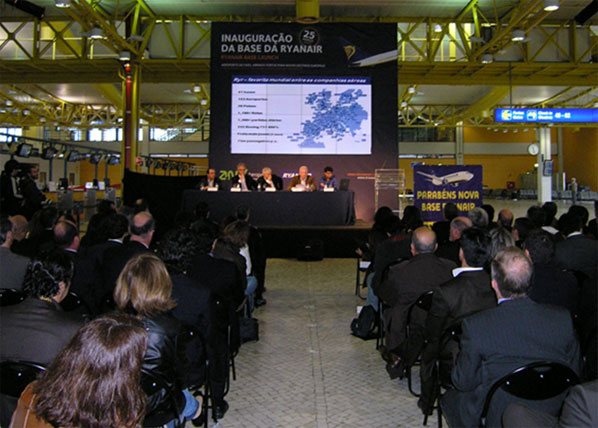 At the beginning of the summer season, Ryanair launched a base at Faro, which instantly added 11 destinations at the airport. Another six were launched this week and there are two more to come before the base is fully established.

Ryanair began serving Faro in a modest fashion as far back as in 2003 when weekend-only flights from Dublin began. For three years, these remained the airline’s only services to the airport serving the Algarve.

In 2006, services from Brussels Charleroi, Madrid and Shannon were added, followed in 2007 by Frankfurt Hahn, Düsseldorf Weeze, East Midlands, Glasgow Prestwick, Liverpool and London Stansted, then in 2008 complemented by Bournemouth and Bremen, and subsequently Porto joining the network in 2009. Madrid services lasted just a year, which meant that at the end of 2009, Ryanair was serving Faro from 11 of its bases across Europe.

Now the airport has become a designated base with six 737-800 aircraft stationed and an additional 11 routes launched at the start of the current summer season. This week saw the launch of a further six destinations (including the resumption of Madrid services), which is to be followed later in the week by Edinburgh and then Cork from the beginning of June. This will raise the network to 30 destinations and means that Ryanair overtakes easyJet as the airport’s busiest customer in terms of weekly departures. 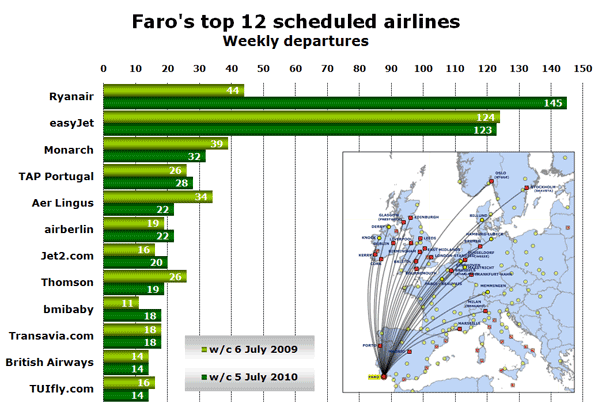 Ryanair’s 30 routes have an average weekly frequency of just under five, while easyJet’s 11 destinations are served on average 11 times weekly, helped by the fact that its London Gatwick service has 36 weekly departures. In total, 120 of easyJet’s 123 weekly departures are to airports in the UK, which remains the airport’s number one international market.

As a result, easyJet and Ryanair compete head-to-head on just three routes; to Bristol, Liverpool and London Stansted.

Dublin has highest frequency followed by London Stansted and Porto

Apart from competition with easyJet on various UK routes, Ryanair also goes head-to-head with Aer Lingus on the Dublin route, bmibaby on the Birmingham and East Midlands routes, and Jet2.com on flights to Edinburgh and Leeds/Bradford. Dublin is also the route that Ryanair serves with the most number of weekly flights, 18.

Shannon is no longer served, while several of the new routes may only be summer seasonal services. Faro is Ryanair’s second base in Portugal. In Porto, the airline will be operating 114 weekly flights this summer to 24 destinations making it the second biggest carrier at the airport after TAP Portugal which offers 253 weekly departures to 18 airports in Europe, North America and South America.