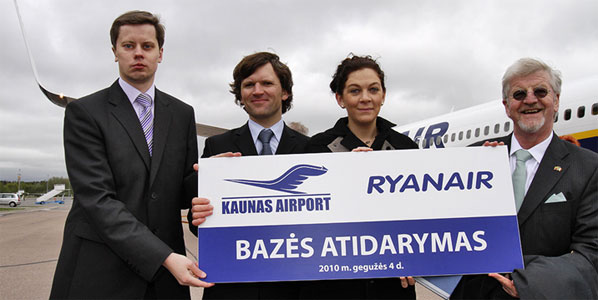 The phrase missing from your Lithuanian phrase book, which every network planner should know: ‘Bazės Atidarymas’ = ‘Base Opening’. Holding the sign with the key message are Kaunas’ Mayor Andrius Kupcinskas; Kaunas Airport’s GM Arijandas Sliupas; Ryanair’s Sales and Marketing Executive Maria Macken; and the Irish Ambassador to Lithuania, Donal Denham.

Last week saw the launch of Ryanair’s 40th base in Europe, and the first in Eastern Europe, when several new routes were introduced from Kaunas airport, the second largest in Lithuania after Vilnius. Passenger numbers at the airport have grown from just 27,000 in 2004 to over 450,000 in 2009. With the exception of an airBaltic service to Riga which began in June 2009 using a Fokker 50, all other scheduled services have been operated by Ryanair who first began flying to the airport in September 2005 when daily flights from London Stansted were introduced.

A total of 21 destinations have been served by Ryanair from Kaunas since September 2005. Of these, three were relatively short-lived; Stockholm Skavsta, Glasgow Prestwick and Shannon services were all dropped within 18 months of starting. Of the 18 routes currently operated, 14 are to other existing Ryanair bases, with the exceptions being Berlin Schönefeld, London Gatwick, Paris Beauvais and Tampere.

Kaunas airport traffic up 35% in first quarter of 2010 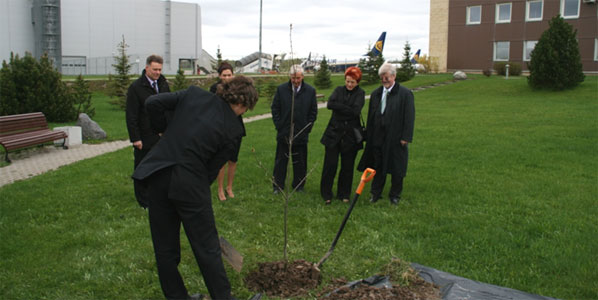 According to Lithuanian tradition, an oak tree was planted as a symbol of the strength and long life of the cooperation between Kaunas Airport and Ryanair.

In the first three months of 2010, Kaunas airport’s passenger numbers have been up 32.5% (January), 36.9% (February) and 37.3% (March). The 10 new routes started this month (Bristol began in March) should see the airport’s traffic growth accelerate even faster in the coming months.

Two 737-800 aircraft will be based at Kaunas with these aircraft accounting for 41 of the 60 weekly departures. Basically, each Kaunas-based aircraft will operate three daily rotations every day of the week. Birmingham, Bristol, Liverpool, London Luton and London Stansted services will be flown by aircraft based in the UK.