Last week saw TAM Linhas Aereas, Brazil’s biggest airline, join Star Alliance, giving the alliance a much-needed boost in South America. Carrying over 30 million passengers annually on a fleet of over 130 mostly Airbus aircraft, the airline continues to be the leading player in the dynamic Brazilian domestic market and is also the leading Brazilian airline on international flights to and from the country that will host the Olympics in 2016 and the FIFA World Cup in 2014. The battle to be number one in the domestic market has been fought for several years with GOL, the low-cost carrier that started operations in January 2001.

Despite growing by almost 7% in 2009, TAM’s market share of the domestic market fell by almost five percentage points as total demand (as measured by RPKs – Revenue Passenger Kilometres) grew by almost 18%. Between 2006 and 2008, TAM’s domestic growth had always been higher than the overall average. In 2008, TAM and GOL/VRG combined shared almost 93% of the domestic market. A year later, this had fallen to 87%, partly due to the rapid emergence of Azul, the latest airline from jetBlue founder David Neeleman, who grew up in Brazil. Webjet saw demand for its services double in 2009, while Trip grew by over 50%.

Now serving five destinations in Europe and three in USA 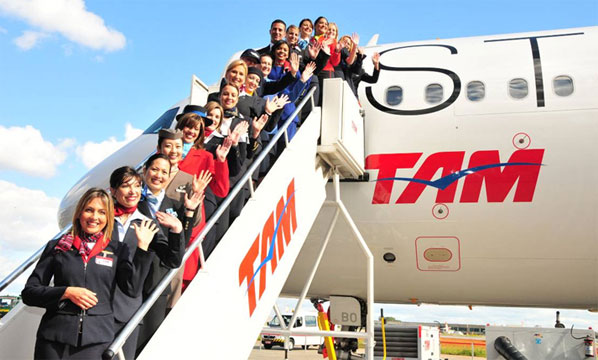 TAM’s alliance partners, here represented by a member of cabin crew from each Star Alliance member airline, will provide connectivity to its European and North American network. TAM’s international route network has been stagnant for the last year and a half, raising hopes of the boost that the alliance membership will give. (Photo: Gladstone Campos/Realphotos)

According to OAG data for May 2010, some 41 airlines operate international scheduled services in the Brazilian market. In terms of seat capacity TAM has 24% of the total, while GOL/VRG has 12% giving the two Brazilian carriers around 36% of the total. The leading foreign carriers are TAP Portugal (8.6%), American Airlines (6.7%), Aerolineas Argentinas (4.5%) and Air France (3.8%). While GOL’s international network of just 11 routes is focused on Argentina (six routes) and other countries in South America, TAM’s network includes North America and Europe.

In terms of weekly flights, Buenos Aires is served with eight daily flights, Miami with four daily flights and Paris CDG with three daily flights. No new international destinations were added during 2009 and none are currently planned for 2010. However, with Brazil one of the favourites for this year’s football World Cup in South Africa, the airline is operating a number of charter flights during June and July from Sao Paulo to Cape Town, Durban and Johannesburg.