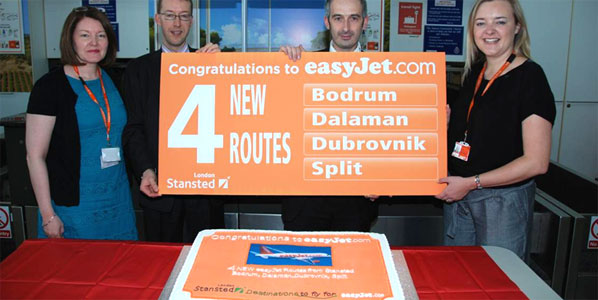 Last week’s four new easyJet routes from London Stansted have helped the base reach the same size as the airline’s ‘home’ base London Luton. easyJet will operate just over 350 departures per week from each of the two airports this summer, while the London Gatwick base still dominates with almost 900 weekly departures.

When easyJet acquired Go (the independent low-cost airline which had, prior to a venture capital aided management buy out, been part of British Airways) in May 2002, it acquired three new bases; at Bristol, East Midlands and London Stansted. Of these, London Stansted was by far the biggest. However, the Stansted base was, and still is, home to arch-rival Ryanair’s biggest base. While easyJet’s pan-European network has grown considerably since the summer of 2003, its London Stansted base has remained relatively unchanged in terms of flights. This summer, the airline will operate around 50 daily departures from London’s third busiest airport, about the same as last summer, but down from the peak in summer 2007 when there were over 60 daily flights. 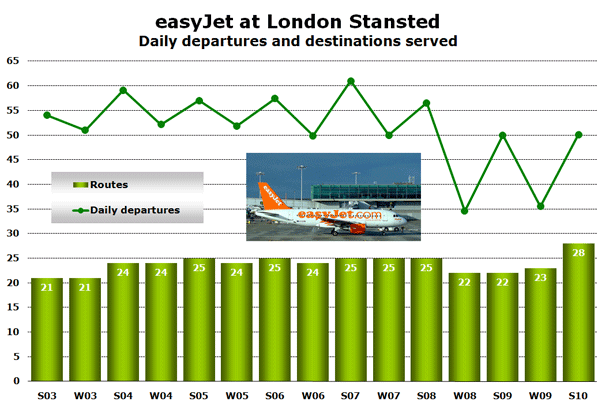 What is clear is how the airline has cut back the number of daily flights operated in winter while keeping the number of destinations served relatively unchanged.

In easyJet’s biggest development at the airport for several years, this week saw the launch of four new routes; two to Croatia (Dubrovnik and Split) and two to Turkey (Bodrum and Dalaman). This follows the introduction at the start of the summer season of daily flights to Cagliari, bringing the number of destinations served by the airline from Stansted to a new record of 28.

Since the summer of 2003, a total of 16 new routes have been started, while eight have been dropped (some moved to other airports), leaving a net gain of eight. However, since Geneva is currently only served in winter, the net gain in routes between summer 2003 and summer 2010 is seven.

Domestic routes to Northern Ireland and Scotland have the highest frequency, although no route is served more than four times daily. In the past, Edinburgh was served as often as six times daily, while Belfast, Glasgow and even Newcastle were served up to five times per day. Direct competition on easyJet’s current Stansted network is provided by Ryanair on six routes; Alicante, Faro, Fuerteventura, Ibiza, Malaga and Palma. The airline’s new services to Turkey are also keenly contested with four competitors on the Bodrum route (Kibris Turkish Airlines, Pegasus, Thomas Cook and Thomson) and three on the Dalaman route.

London Gatwick base bigger than Luton and Stansted combined

Even combining the flights and number of destinations served from the two smaller London bases at Luton and Stansted, the figures fall well short of what easyJet is now achieving at London Gatwick, where it is now the biggest carrier, having overtaken British Airways some time ago.