The decision by Sir Stelios Haji-Ioannau to resign from the board of easyJet, the airline he founded 15 years ago, is the latest move in an apparent fundamental disagreement about the airline’s growth strategy which Sir Stelios believes is too ambitious. By the time the new CEO (Carolyn McCall) takes over as CEO later this summer it will mean that four of the eight strong Executive Management Team will have been with the airline for less than 18 months and the only member who has been at the airline for more than five years was ‘acquired’ by easyJet when they bought Go back in 2002.

So are easyJet growing too fast? While firmly entrenched as the second largest LCC in Europe an analysis of airline schedules for this August when compared with last August reveals that capacity is up a modest (by LCC standards) 9.1%, slightly above the apparently agreed target of 7.5% set by the easyJet board last year. 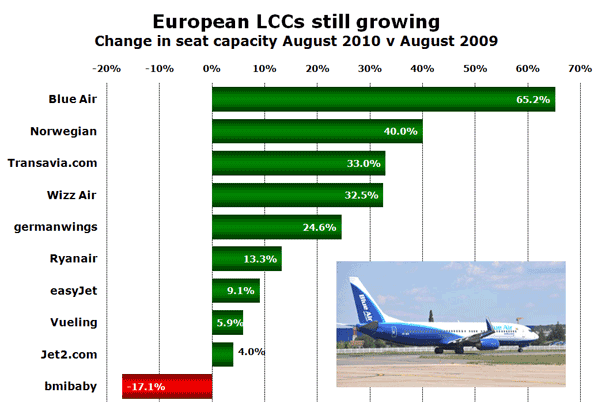 Romanian carrier Blue Air, the smallest of the LCCs examined here, is set to grow by over 65% this summer while six of the 10 LCCs analysed are planning double-digit growth including Ryanair whose capacity is up 13%. Only bmibaby (under new Lufthansa ownership) is shrinking with its fleet reduced this summer to just 14 aircraft, half of which will be based at East Midlands airport from which easyJet withdrew services earlier this year.

Norwegian’s continued rapid growth (especially in Copenhagen) means that the carrier has overtaken Vueling as Europe’s third biggest LCC, carrying over one million passengers in March while its Spanish rival transported 864,000.

Transavia.com’s growth can be explained in part by the growth of its French and Danish subsidiaries, while Wizz Air continues to grow at over 30% as it develops more routes between Central & Eastern Europe and Western Europe.

Given the fluctuating nature of the airline’s network (it dropped over 100 routes in the last year while starting over 300) it is hard to determine exactly when the airline reached (or will reach) the milestone of operating 1,000 routes. What is known is that by mid-August it will be operating 1,023 routes more than twice as many as easyJet, its nearest rival. 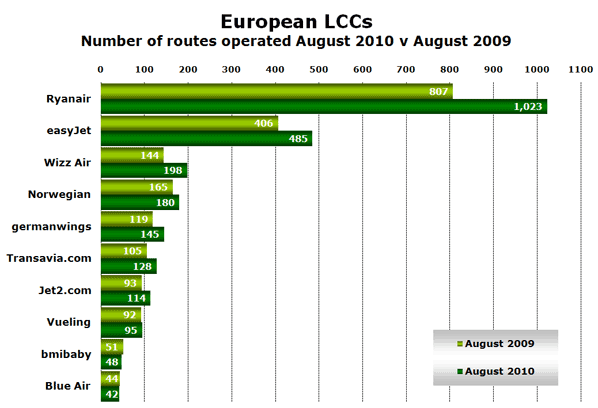 By then Wizz Air will also have overtaken Norwegian to be the third biggest European LCC in terms of routes flown with almost 200. Despite its rapid capacity growth Blue Air’s network has actually reduced by two routes suggesting that the airline is concentrating on frequency growth to develop density in key markets.

One trend that appears to be continuing is that the average frequency of routes operated by European LCCs is still coming down. Since the summer of 2006 Ryanair’s average frequency on a route has fallen from just under nine weekly flights to five. However, it may take a while before it passes Wizz Air which averages just under four weekly flights on each of its routes. 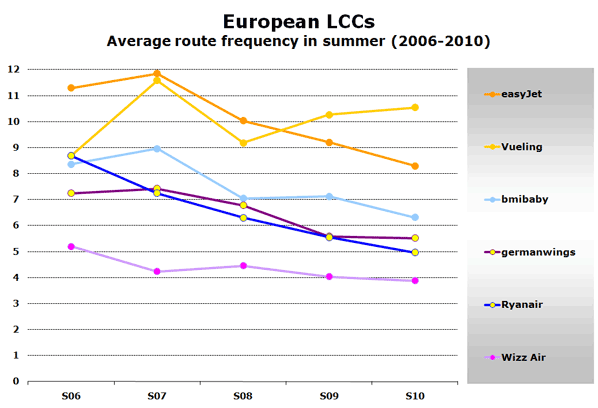 easyJet’s focus on operating to and from busier airports with larger catchment areas means that its average weekly frequency, though down from almost 12 in the summer of 2007, is still well above eight, and bettered only by the new clickair-absorbed Vueling which this summer will operate as many as eight daily (yes, daily) flights between Barcelona and Ibiza, Mahon and Paris Orly. Of its 95 routes this summer, 59 are operated at least daily.

However, for high frequency low-cost routes look no further than Norwegian who this August will operate 77 weekly flights between Oslo and Bergen, 72 between Oslo and Trondheim and 62 between Oslo and Stavanger. In contrast, the carrier also operates 46 routes (mostly between its Scandinavian bases and Mediterranean airports) with just a single weekly frequency.