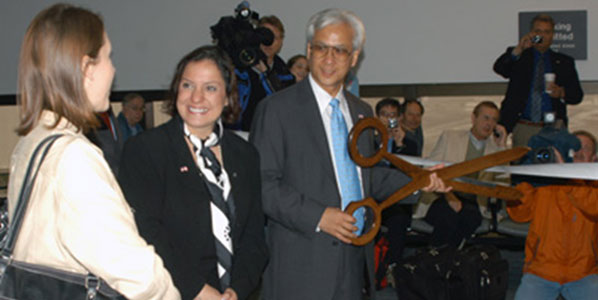 All smiles yesterday in Cincinnati as airport CEO John C. Mok welcomes the first Air Canada (Jazz) passengers for the new twice daily Toronto service, increasing daily non-stop service from four to six. The airport is actively discussing air service growth with prospective new entrants as passenger levels have halved in the last four years due to Delta’s restructuring. “Delta's right sizing is the wrong size for Tri-State” said Mok recently in response to Delta’s revised schedule which saw daily peak departures drop by 45% when it was implemented this month.

Sometimes nicknamed “the birthplace of aviation” because the Wright Brothers were based in Dayton, Ohio ranks as the seventh most populous state in the USA (with around 11.5 million people), despite being only the 34th largest. Its three biggest cities are Cincinnati, Cleveland and Columbus, each of which is served by a major airport though the airport serving Cincinnati is technically in Northern Kentucky. For the purposes of this analysis we will consider it allocated to Ohio.

Both Cincinnati (a Delta hub) and Cleveland (a Continental hub) saw traffic fall significantly in 2009 as both carriers continued to prune their networks. Some 10.6 million passengers were handled at Cincinnati airport in 2009 (down 22%) while Cleveland saw traffic fall 12.5% to 9.7 million passengers last year. The state’s third biggest airport at Columbus saw a 10% reduction in traffic to 6.2 million. The other two airports of note in Ohio are Dayton (2.5 million passengers in 2009, down 14%) and Akron/Canton (1.4 million, down 2%). So far in 2010, Columbus’ traffic is up slightly, Cleveland’s is stable at 2009 levels while Cincinnati’s is continuing to fall by around 20%. 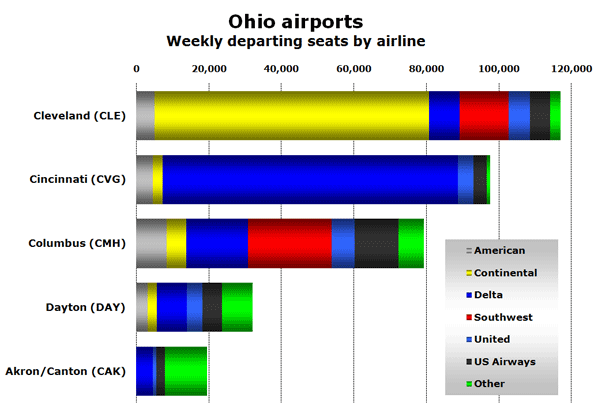 While Delta still operates over 80% of all seat capacity at Cincinnati, and Continental has a 65% share of the Cleveland market, Columbus is not dominated by any single carrier (Southwest is the leading carrier with just under 30% of seats). 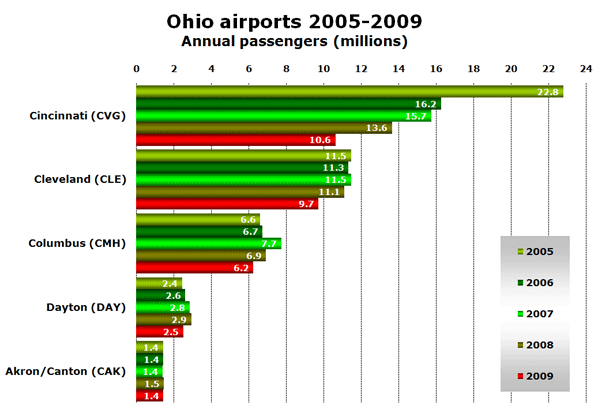 In the last four years, passenger levels at Cincinnati airport have fallen by over 50% as a result of Delta’s restructuring of its hub at the airport. At this rate, Cleveland may overtake Cincinnati this year to become Ohio’s busiest airport. The spike in traffic at Columbus in 2007 can be explained by the emergence (and subsequent failure) of Skybus, a low-cost airline operating A319s which operated from 22 May 2007 until 5 April 2008.

In the last two years, the two major airports have seen a significant downsizing of the route networks operated by their base airlines. The only major presence of low-cost carriers is at Columbus where Southwest is the leading airline and AirTran has added the most new routes. 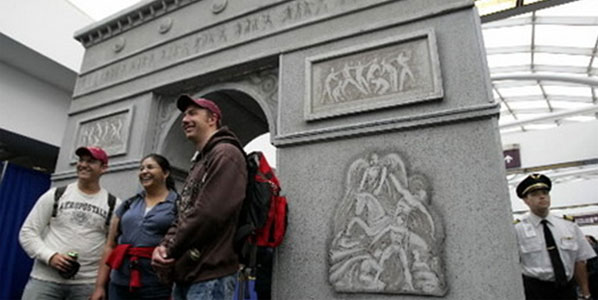 Too good to be true: A miniature Arc de Triomphe at Cleveland’s Hopkins International Airport signified Continental’s Paris service which operated for the 2008 summer season only.

The state’s airports have relatively few international services with only Toronto served from all three of the biggest airports. This week saw Air Canada (Jazz) launch double-daily Toronto services to compete directly with Delta and become the only non-US carrier to currently operate scheduled services from Cincinnati.

Cancun, Montreal and Punta Cana (Dominican Republic) are all served from Cincinnati and Cleveland while the only remaining non-stop connection to Europe is a daily Delta flight from Cincinnati to Paris CDG.

London Gatwick services to both Cincinnati and Cleveland have been among the route casualties in the last two years, while Delta’s daily service to Frankfurt from Cincinnati has also been the victim of network pruning (last August).